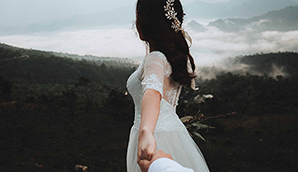 Why Husbands Can’t “Get Her Ready for Jesus”

In mid-December, an article was published on the Desiring God website titled “Husbands, Get Her Ready for Jesus.” Written by a Philadelphia pastor named Bryan Stoudt, this piece argues that husbands have a responsibility to challenge and correct their wives in order to keep them on course through the path of sanctification.

For Stoudt, husbands have a unique responsibility for their wives’ sanctification, a responsibility that wives do not share for their husbands. He describes this responsibility as “the staggering privilege of getting our wives ready for Jesus, their true husband.”

This is indeed a staggering responsibility to lay on the shoulders of husbands. Indeed, we might call it a staggering burden, much like the ones Jesus accuses the Pharisees of laying on peoples’ shoulders in Matthew 23.

Stoudt bases his argument on the instructions to husbands in Ephesians 5. He says, “It’s crystal clear: God calls husbands to be instruments of his sanctifying work in the lives of our wives,” and follows this assertion with Ephesians 5:25-26: “Husbands, love your wives, as Christ loved the church and gave himself up for her, that he might sanctify her, having cleansed her by the washing of water with the word” (ESV, as quoted by Stoudt).

But if Paul’s analogy is not about sanctification, how are we to understand it? To answer this question, we must consider how Christ shows his love for the church and how he makes the church holy.

I can’t answer that question fully in a blog post. But part of the answer lies in the kenosis passage in Philippians 2: Christ emptied himself, humbled himself, made himself a human being—and in so doing, he made it possible for us sinful humans to become co-heirs with Christ (Romans 8:17). Christ gave up his exalted position as Creator of the universe to make us holy, to make us heirs of eternal life, to make us his worthy bride.

When Paul speaks to husbands, he is speaking to men in a culture that elevates men above women; as Christ has more power and authority than humans, so Roman men possessed power and authority that women simply did not. Men had more legal rights and protections than women and were considered superior both physically and intellectually. But if we read the analogies of Ephesians 5 through the lens of Christ’s willingness to humble himself, we find that Paul says something striking, not about men’s power over women but instead about the equality of men and women before God.

As Paul continues the analogy between a husband’s love for his wife and Christ’s love for the church, he says, “In this same way [as Christ loves the church], husbands ought to love their wives as their own bodies. … they feed and care for their body, just as Christ does the church” (Eph. 5:28-29). Paul here is saying that the Church is Christ’s body, which he loves as himself; husbands are to love and value their wives as if they are the same as themselves.

When Paul tells husbands in first-century Roman culture to love their wives as they love their own bodies, and just as Christ loves the church, he is asking them to lay down their cultural privilege, their position of power and authority, and treat their wives as equals.

Like the command for wives to submit to their husbands, Paul’s analogy in Ephesians calls husbands to set aside their selfish desires and show sacrificial love to their wives. Thirteen years into my marriage, I can attest that this is still hard work; selfishness comes more easily than sacrifice. Yet this work is not a burden. I can see how it benefits my husband, my marriage, my children, and even myself as I practice sacrificial love for my spouse—and my husband would say the same thing.

Stoudt’s reading of the passage does, however, add a burden to husbands. He tells men that in addition to loving self-sacrificially, they also have a unique responsibility to prepare their wives to be the bride of Christ. Stroudt suggests that God will hold husbands responsible for their wives’ spiritual growth—sanctification—in a way that God will not hold wives responsible for their husbands’ spiritual growth.

While some men may abuse this responsibility, using it to control their wives and bolster their own power, most men have no desire to manipulate, control, or spiritually abuse their wives. Most men I know respect their wives as co-heirs with them of God, equally capable of spiritual insight and equally responsible for their own spiritual growth. Yet Stroudt chastises these men as passive, more interested in preserving the peace of their kingdoms than in advancing God’s glory.

Stoudt burdens men with a responsibility that they cannot possibly fulfill, because only God can make us holy.

I want to be clear that marriage can be an important instrument in our spiritual growth, and spouses certainly have the responsibility to challenge and encourage one another as co-heirs of Christ working out their salvation. But to shift this responsibility to husbands alone is binding up an impossible burden on their shoulders, since men are not Christ.

I haven’t even examined how Stoudt’s theology infantilizes women and establishes dangerous power dynamics in marriages. But one of the assertions of feminists is that patriarchy hurts men as well as women, and this article shows the heavy, and unnecessary, burdens and expectations that male headship places on husbands.

More articles by Sarah Lindsay:
The Ancient Roots of Western Sexism
Is The Church Too Feminine?
Mutual Submission: A Response to CBMW’s “Soap Bubbles Submission”

PrevPreviousRwandan Women Rising
NextSupport Survivors and Defy Patriarchy in 2018Next