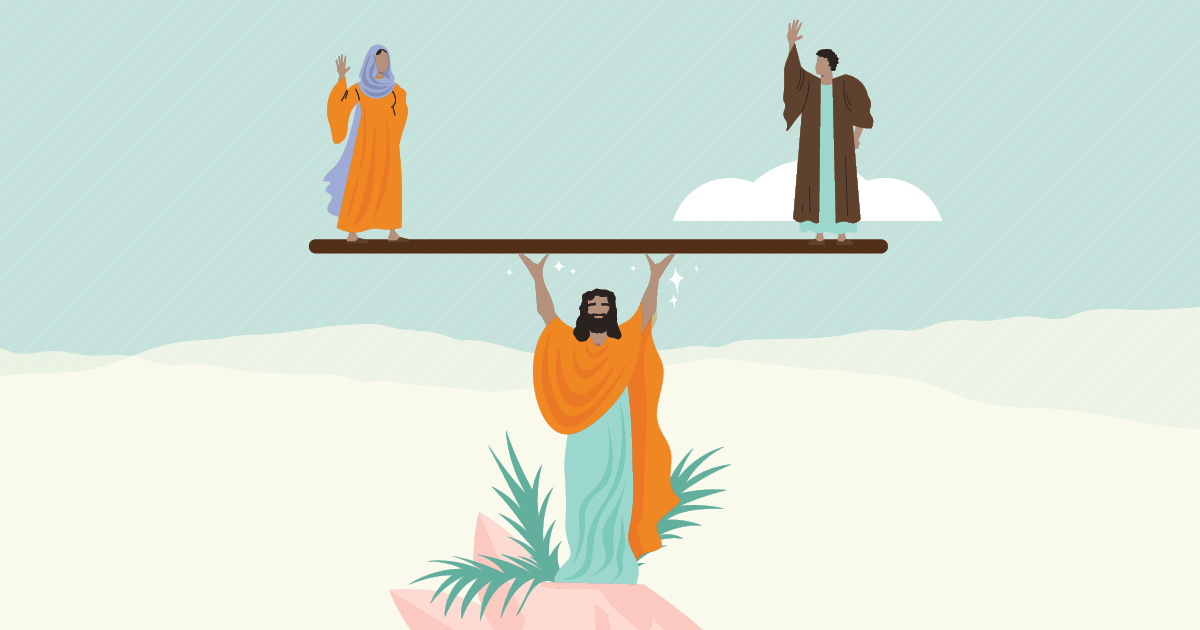 Can the Sermon on the Mount Teach Us Anything About Women’s Biblical Equality?

Jesus’s Sermon on the Mount contains six sayings that begin with, “You have heard that it was said.” In these sayings, Jesus follows a standard rabbinical way of expounding upon the Torah, the first five books of the Bible. On first reading, these sayings may not appear to have anything to teach us about how the gospel influences our understanding of women’s biblical equality. However, when we consider them in juxtaposition to related laws in the Torah, we find that the third, fourth, and fifth of these sayings have important implications for women’s biblical equality.

It was also said, “Whoever divorces his wife, let him give her a certificate of divorce.” But I say to you that anyone who divorces his wife, except on the ground of sexual immorality, causes her to commit adultery, and whoever marries a divorced woman commits adultery.

In the third “You have heard” in Matthew 5:31–32, Jesus alludes to Deuteronomy 24:1–4, which is a small collection of laws related to divorce that make a distinction between women’s and men’s respective legal rights. It allows a husband to divorce his wife because of “something objectionable about her,” yet we see no parallel provision for a wife in the same situation. This law gives men rights that it does not give to women.

Further, I’d like us to consider that Jesus seems to be speaking to men in his comments regarding adultery and divorce in the Sermon on the Mount. In the previous saying in Matthew 5:27–30, he equates sexual lust for “a woman” with committing adultery, indicating he has primarily men in mind. Likewise, in this third saying, it seems that Jesus intends to address men, referring only to a husband seeking to divorce his wife, not vice versa. We might think initially that Jesus is perpetuating a discriminatory approach to divorce that gave men rights over and above those given to women. Or we might think women need to simply read themselves into the text. But I think we can learn something else here.

By any standard of his day, Jesus’s expansion on Deuteronomy 24:1–4 severely limits men’s access to divorce. Today, we equate liberal divorce rights with greater legal equality between women and men. So it might look like Jesus’s position on divorce runs contrary to egalitarian values. But if Jesus had simply advocated for more liberal divorce laws on the basis of Deuteronomy 24, he would have been arguing for the expansion only of the rights of men. The truth is, the divorce law in Deuteronomy 24, if taken at face value, leaves ample room for liberal interpretation—but only for the benefit of men.

Instead of advocating for a more liberal interpretation, Jesus suggests an unprecedented restriction on divorce. It’s easy for us to miss that, in doing so, he’s restricting only men, not women. If Jesus’s peers had taken him seriously, the effect would have been equalizing for women and men. The Torah makes a very limited provision for a wife to leave a neglectful husband in Exodus 21:11. Jesus, likewise, suggests an extremely limited scenario in which a husband might seek a divorce from his wife.

Today, Christians with questions about the morality of divorce in their lives often consult Jesus’s third saying in Matthew 5:31–32. While Jesus’s words are certainly still relevant, we should recognize the difference between what we’re asking now and what Jesus’s questioners were asking then. As an American, I assume that women and men have basically the same legal divorce rights. But this was emphatically not an assumption that Jesus or his listeners could have shared with me.

In Jesus’s day divorce was controlled almost exclusively by men. While it is true that Deuteronomy 24:1–4 and Exodus 21:11 provide some protections for women, those protections are only for women after the divorce has occurred. In other words, the Torah does not give explicit permission for a woman to use divorce as a way of escape from abusive, neglectful, or unfaithful husbands—which is one reason many of us today believe access to divorce is necessary for women’s safety and welfare.

When we understand that Jesus is addressing primarily men in Matthew 5:27–32, we see that he isn’t providing a new blueprint for divorce law, but is instead exposing the inadequacy of the questions his audience is asking. They want to know what they can get away with—what is allowed and what is not. But Jesus hones in on something much more fundamental. The right question, Jesus is saying, is not, “What can I get away with? What are my limits?” but, “What is the purpose of my sexuality, my marriage, and my other human relationships? And how can I live in harmony with that purpose?” That is a question for men and women, married and unmarried, alike!

Having said that, we should avoid overly privatizing Jesus’s “You have heard” sayings. His words are not merely of personal value. They have public implications. And in this case, those implications touch women’s status in marriage directly. Counterintuitive as it may seem, by suggesting a highly restrictive approach to divorce for husbands, Jesus gestures toward an understanding of marriage in which husbands and wives stand on equal ground.

Again, you have heard that it was said to those of ancient times, “You shall not swear falsely, but carry out the vows you have made to the Lord.” But I say to you: Do not swear at all . . . . Let your word be “Yes, Yes” or “No, No”; anything more than this comes from the evil one.

At the beginning of this fourth saying, Jesus seems to be alluding to three passages in the Torah—Leviticus 19:12, Deuteronomy 23:21, and Numbers 30:2. Leviticus 19:12 and Deuteronomy 23:21 are, like the Ten Commandments, simply commands, outlining no consequences of their disobedience. However, Numbers 30:1–16 is a detailed collection of laws describing the legal responsibilities for people who make vows. What stands out immediately in this passage is the way that women and men are treated differently.

To summarize the differences:

Jesus, however, forbids formal vow-making here in Matthew 5:33–37. His approach to the issue of vow-making, thus, becomes immediately relevant to the question of biblical women’s equality. Notice that Jesus does not merely command his followers to always tell the truth. He also tells them to refrain from making any vows at all! What was once a law that subordinated female responsibility under that of a male—whether a father or a husband—is replaced by Jesus’s command not only to always tell the truth but also to abstain from all vow-making. Now, the distinction between the relatively greater strength of a man’s vow over a woman’s disappears. Jesus wants his listeners to abandon the making of vows altogether. Instead, he commands them to tell the truth and keep their promises always. By logical implication, we might add, “whether you’re a man or a woman.”

Many of us have heard teachings about the importance of a woman’s having a “male covering.” The laws of Numbers 30:1–16 can be (and certainly have been) used to support this. However, by contrast, we cannot use Jesus’s comments on vow-making in Matthew 5 to support that idea. Instead, Jesus seems to teach that every person who bears God’s image is equally responsible before God to tell the truth and to keep promises.

You have heard that it was said, “An eye for an eye and a tooth for a tooth.” But I say to you: Do not resist an evildoer. But if anyone strikes you on the right cheek, turn the other also, and if anyone wants to sue you and take your shirt, give your coat as well.

Jesus’s treatment of the principle of “an eye for an eye” in his fifth saying deserves its own extended discussion. But for now, let’s focus on verse 40, where Jesus says, “[A]nd if anyone wants to sue you and take your shirt, give your coat as well.”

Once again, our first reading of this passage doesn’t reveal any answers to our questions about Jesus’s teaching on issues of women’s biblical equality. However, historical evidence suggests that women were largely restricted from participating in court proceedings relative to men in the time of Jesus, both in Jewish and Roman contexts.2 This meant that a woman depended on the men around her for vindication if she were accused of wrongdoing, whether justly or falsely.

When Jesus, therefore, commands a different approach to dealing with those who seek to use legal procedures as a means of oppression, he is in effect placing women and men on the same level. Some of us, perhaps, would rather see Jesus advocating outright for the equal rights of women. But instead, he calls for the voluntary humiliation of his male disciples. They are, in effect, commanded to join women in their place of vulnerability.

While women did not have the same legal resources as men did, both women and men equally had the means to turn the other cheek, to give up their coat, and to go the extra mile. The power that Jesus offers to both women and men is their own humiliation. Such humiliation serves as a judgment on oppressors. As Peter would later write, “Maintain a good conscience so that, when you are maligned, those who abuse you for your good conduct in Christ may be put to shame” (1 Peter 3:16). In fact, there is a sense in which a man’s refusal to exploit his own legal prerogatives, and to thereby limit himself to the use of only those resources available to the women around him, can serve as a sign of the humiliation of Christ (see Phil. 2:5–13).

[1] We might infer from 30:3 that the vow of a single woman living alone who had never married would also be binding independent of the permission of any man. But a woman with such a status would have been very rare.