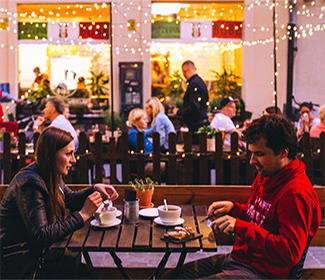 Lessons from Eliezer: What an Old Testament Matchmaker Has to Say About Egalitarian Dating

Dating is difficult in today’s culture. As I have counseled single women and men through the years, I often heard pleas for help to find a Christian person to date. And let’s be honest. There are many different kinds of Christians. How does one get help to find a similar kind of Christian? One who values mutual submission and servant leadership in marriage?

Before I continue, I want to be clear that I do not believe marriage is the ultimate destination or fulfillment in life, as Christian culture often suggests. A woman’s created purpose is not to bear children and be a submissive wife; a man’s is not to be a father, husband, and provider/protector. We all share the same purpose—to serve God according to God’s call and in line with our gifts. We were created for community, but that community does not need to be marriage, nor should marriage be our only or primary form of vulnerable community. Paul exhorted the early church to be single and dedicated fully to the Lord’s service. This can be a very difficult thing, especially in cultures that idolize marriage over other forms of community. What follows is geared toward those who are actively seeking marriage, but I pray that we will also learn to celebrate singleness as a good thing and work to be the kind of communities where people who are not married do not feel isolated or alone.

Matchmaking as “the help of God.”

Some people meet their partners with little effort. For many of us, meeting potential partners with similar values is difficult. Whether it’s dating apps, reliable friends, social gatherings, or something else, many of us enlist the help of a matchmaker. And the idea isn’t as novel as you might think! Matchmaking services have been the staple to forming marriages for thousands of years. In Genesis 24, we read the story of a famous matchmaker. He is unnamed in this chapter, but Jewish tradition tells us this was Eliezer, the servant of Abraham.

Eliezer’s name is a subtle reminder of the goodness found in an ideal match. El-ezer means “God’s help.” In Genesis 2:18, God told the first man that it was not good that he was alone, and that he would make an ezer for him. An ezer is strong aid, or help in trouble. Through the matchmaker Eliezer, God helped Isaac to find Rebekah. Eliezer’s story can provide helpful instruction on how to make a match with someone who shares our egalitarian values.

Be willing to defy cultural norms

When Abraham tasked Eliezer to find a wife for his son, Isaac, he had one condition. The match must not come from the families of the Canaanites. Eliezer must go back to Abraham’s family living in Haran and find a woman from Abraham’s own kin. Eliezer’s skeptical reaction reveals something about the marriage traditions of that day.

Eliezer asked, “What if the woman is unwilling to come back with me to this land? Shall I then take your son back to the country you came from?”

In my culture, it is customary for the bride and groom to leave both sets of parents and form a new home together, so it is easy to miss the nuance of this strange condition of Abraham. It was not a matter of distance alone that would keep the woman from agreeing to the marriage. It was against custom for the bride to leave her family to join the groom’s family. We see the origin of this custom in Genesis 2:24, when God ordains the marriage of the first husband and wife. “A man will leave his father and his mother and be united to his wife.” It does not say the wife is to leave her parents and join him. The original motion in marriage—and some would argue it is a divine instruction—is toward the wife and her family home. (Note as well that Samson’s wife stayed in her own home in Judges 15. Also, Jacob asked his wives to leave with him in Genesis 31; it was not assumed.)

So, Eliezer naturally asked, if the bride is unwilling to break with tradition, should Isaac do what is expected of him and go live with her? Abraham replied that no, Isaac must not leave the promised land of Canaan. Eliezer would be freed of his oath if the woman was not willing to leave her home. This was the deal-breaker.

Like Eliezer, those seeking an egalitarian spouse struggle against the marriage customs of our day. Traditional values concerning gender roles and spousal expectations seep into each nuance of the dating experience, and unless you set the conditions for your match before undertaking a matchmaking journey, you might be tempted to compromise. Is being committed to an egalitarian marriage a non-negotiable for you? Do you have any other deal-breakers? Like Eliezer, you must determine ahead of time the kind of marriage you desire, with the understanding that if your conditions are not met, you are willing to call the whole thing off. This will limit the field from which you can choose. But like Eliezer, you can trust that God will aid you in your choice.

Invest in the task

Next, we see that Eliezer took the matter seriously. He swore an oath. Marriage is one of the most important choices a person can make. It is important to invest in making the best choice possible. For Eliezer, that meant being held accountable. His oath indicated he was answerable to Abraham for his decision. There is no oath-taking in dating, but you might consider enlisting a trusted mentor committed to egalitarian values to walk alongside you on your dating journey. This mentor will offer not only encouragement, but accountability and oversight.

Eliezer prepared himself for the long journey. He took ten camels and all manner of good things along with him. Committing yourself to the journey of finding a spouse will take resources of money, time, and emotional toil. Online dating, for instance, requires hours of sifting through data and profile writing, personal exploration, and hard evaluation. It is not all fun and games. Expect disappointment as well as joy. Dating sites also charge fees for their services. It may be a long search. Is a great match worth ten camels and all manner of good things? Then invest (what you are financially and emotionally able to) in the journey.

Know your deal-breakers and pray with purpose

Eliezer’s first condition for a wife for Isaac was that she be from Abraham’s extended family and that she be willing to move to Isaac’s home. Those were non-negotiable. But, we see that he had other parameters in mind. Even though Rebekah is described as a beauty, this is not on Eliezer’s list. He is looking for someone who is willing to give him a drink and then offer to water all his camels. He wanted a woman who was generous to strangers, caring toward animals, and took initiative. And this is exactly what he asked God to bring him.

I often wonder if Eliezer had a long discussion with Isaac to discover the qualities he was looking for in a mate. Were the personality parameters of being a generous go-getter Isaac’s idea of an ideal wife? Since Isaac was a forty-year-old bachelor, it makes sense to me that he had some idea of what he wanted, and directed Eliezer himself. This “hope for” list creates a prayer list as well. Like Eliezer, we can be bold and ask God for specifics.

Eliezer also prayed for guidance. He understood that his errand was a divine responsibility. A matchmaker makes a match, but God ordains the marriage. Finding a spouse is a paradoxical exercise in juggling the providence of God with our free will. We may decide for ourselves who to marry, but we trust that God guides our choice. Eliezer offers the first recorded spontaneous and personal prayer for guidance, because he believed that God had appointed a wife for Isaac, and he prayed that his match would follow the Lord’s will. Just as Eliezer asked God to guide him, you can ask God to guide you.

Genesis 24:15 says that before Eliezer finished praying, God was already answering his prayer in the arrival of Rebekah. Eliezer asked her for a drink, and she quickly complied. Then without prompting, she quickly gave the rest of her water to his camels and went to fetch more. Rebekah had passed the test with gracious speed. But, in verse 21 we read that Eliezer continued to watch her silently to determine if God had answered his prayer. This extra step shows how well Eliezer understood the paradoxical nature of free choice and God’s will. This girl appeared to be God’s will for Isaac, but Eliezer continued to observe her actions each step of the way.

I’ve found that this is the step that often gets overlooked in the romantic swirl of meeting a perfect match. Matchmaking services find great matches, but continued assessment and personal judgement are necessary to determine if the person is ideal. One way that Eliezer determined if Rebekah was the one for Isaac was to meet her family. Spending time with family and friends of the person you are considering is a great way to determine their integrity and values, and will give you critical insight into family dynamics and personality traits. When you find yourself thinking, this could be the one, go back to your deal breakers and review your “hope for” list of ideal spousal traits. Pray with your mentor and evaluate carefully.

Eliezer’s match was a success. Isaac loved Rebekah. Rebekah’s willingness to leave her home and family to join Abraham’s tribe became the model for all Jewish wedding traditions thereafter to include the bride’s spoken consent to the match. Through the transparent recording of their life in Genesis, we can see that Isaac and Rebekah’s marriage had its troubles, but the story also reveals how God ordained the match for his good purposes.

Eliezer as God’s help in making their match is instructive to egalitarians seeking an equal and like-minded spouse today. His journey shows us the importance of knowing what you are looking for, asking God for guidance, and using personal judgement in the search for a suitable spouse. Those looking for a Christian spouse with egalitarian ideals can turn to the same strategies to help them on their journey to find God’s match for their life.

PrevPreviousWhat If Singleness Isn’t Failure?
NextA Tale of Two Rapes: What Tamar and Bathsheba Teach Us About Power, Consent, and Sexual ViolenceNext