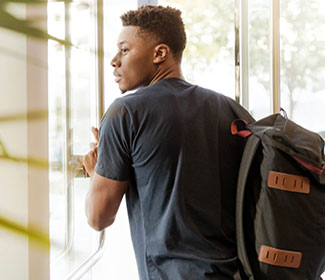 An Egalitarian Man in a Complementarian Bible School

The conversation went downhill very quickly. “I don’t know if I would be comfortable with you working for a female pastor.” Trying to avoid (yet another) debate about women pastors, I retorted: “Well the incoming pastor is male.” “It’s the principle,” my significant other threw back. Thankfully, the awkward exchange ended, and we shifted to another topic.

At that point, I had been attending an institution of higher learning in North Carolina that supports complementarian theology for several years. I was used to opposition to my support for female clergy and women in the pulpit. Time to add some additional context: I am a man and my significant other at the time—who expressed discomfort at the idea of a female pastor—is a woman. Yes, you read that correctly: I am an egalitarian man and female fellow students at my school of biblical studies (including my now ex-girlfriend) were some of the most vocal critics of my views.

How did I come to hold egalitarian values when so many of my classmates did not? Church was not a part of my early upbringing, but I plugged into the United Methodist Church (UMC) as a teenager, a denomination that has long recognized and affirmed women in ministry. In those early days of faith, I was blessed by many female clergy who saw a soul in need of community and poured out the love of God. These clergywomen have been some of the most impactful figures in my faith walk; their prayers have carried me into the pulpit I fill today as a lay pastor for a rural Methodist congregation. As an aside, I am thankful that the church I now pastor gave a woman pastor seven years to build her ministry skills and answer her calling prior to my tenure.

When I was a new believer, I heard a Bible study recorded by former US president Jimmy Carter. I was surprised when Carter mentioned the issue of female clergy, and how he left the Southern Baptist denomination over its ban. While I knew the issue of women in leadership was still debated, theologically progressive, moderate, and conservative Methodists alike generally affirm female clergy. It was not a prevalent issue in my circles, but that changed when I entered an undergraduate program at a school with a complementarian theological stance. After being out of school for two years while dealing with various personal trials, I was thrilled to finally pursue my bachelor’s degree. Like any journey, there were unexpected bumps.

I began to learn more about the religious affiliation of my school, which was rooted in the Churches of Christ denomination. The Churches of Christ, Christian Churches, and Disciples of Christ denominations were birthed from an umbrella movement known as the Restoration Movement. The Restoration Movement claims to seek a return to the order and practice of the early church as described in the Book of Acts. Neither the Churches of Christ nor the Christian Churches ordain women to be clergy or serve as elders and deacons, and they also do not allow them to serve communion. The school held to this view. For example, there was a preaching club at the school that, sadly, excluded women from participation.

Though there were some female students who wanted to serve in ministry and opposed the school’s policy, they were not permitted to explore preaching or being a lead pastor because of their gender. What struck me most, however, was the large number of women who believed they should not be allowed to preach! I wasn’t surprised by male opposition to female leadership, but I knew many female students who also felt that way. Have you ever argued that a certain people group should have equal right to do something while a member of that same group opposed you? I did. Once, a female student was ranting about a matter and I jokingly agreed: “Preach it, sister!” Boy, did she react strongly! She reiterated multiple times that women were not supposed to preach. It saddened me that she not only took my comment so seriously and felt such a strong need to correct me, but that she clearly believed in the complementarian theology that limited her.

It weighed me down and I wondered: “Why would female students oppose me in advocating for their rights?” I wanted women to have a voice in the church—where they were already doing the work without the recognition. The main factor for many students was their upbringing. They had been told that God created them to have equal worth to men but separate responsibilities, and that leadership was designated for men. I couldn’t help but think to myself: Sounds like “separate but equal,” and look how that turned out. During my time at the school, I watched people perform all kinds of theological gymnastics to uphold this “separate but equal” ideology. A professor once claimed that God called Huldah in 2 Kings because there were no men available to lead. He attempted to explain away Huldah’s incredible contributions—all to maintain a complementarian spin on Scripture.

In my first year as a student, I attended a youth event for the United Methodist Church. I couldn’t help but notice the female clergy present, and I wondered how many of my school peers—women included—would have walked right out at the mere sight of a female pastor. No hearing the women out, no giving them a chance. Still, I took hope in the moment because, against all odds, the pastors were persevering and carrying the love of Christ forward.

All in all, I am thankful to have attended this institution despite disagreeing with its position on women clergy. I sensed uneasiness in at least some of the female students I encountered who professed to be complementarian. In making my position known, I hope that I helped create a safe space to talk about their doubts and freely explore this issue. And who knows? Maybe some of those female students heard from me about a different way for the very first time—about a God who equally loves and calls men and women to leadership with no regard for gender. The many debates with my classmates also forced me to research, contemplate, and study the issue of women’s ordination more deeply. I knew I would always need to have ready a stellar defense of my view. If nothing else, I endeavored to treat both my male and female opponents with love and respect. I learned that we must be thoughtful and patient with others regarding issues like this. Deeply-held beliefs will not be unraveled in one conversation, but they may change through a process of thoughtful contemplation, prayer, and study—and sometimes through just creating space to shake hands and disagree.

This year, I attended the Annual Conference for the North Carolina United Methodist Church, where they showed a video of male clergy reading inappropriate things said to female clergy. Hearing the painful comments that women pastors received from congregants, I was convicted on this issue all over again. It reinforced the need to speak up both in spaces that recognize female clergy and those that do not—not because women cannot speak for themselves, but because no one should be silent about this. Looking back now, I confess I did not always do my best in standing up for what I believed about women clergy during my time at a complementarian Bible school. In conversation, I would sometime refer to female pastors as “they” to avoid giving away their gender, or I would say “the pastor” when referencing a female pastor and not use “she/her.” I repent of not doing enough to support women in ministry.

It is my fervent hope that people will learn from my experiences (and my mistakes). I pray that we men will actively support our sisters in Christ who are asked to bear additional burdens due to their gender. I pray we become strong allies to our female peers who long to minister. I pray that women will explore Scripture’s richness for themselves and discover that complementarian theology is not their only option. And finally, I pray that the church will accept that women are pastors not because denominations do or do not call them pastors, but because they are prompted by the Holy Spirit.

PrevPreviousIt’s Not Easy Being a Woman Professor: Subverting Sexism in Higher Education
NextModesty, a Fairytale Witch, and Growing Up DangerousNext