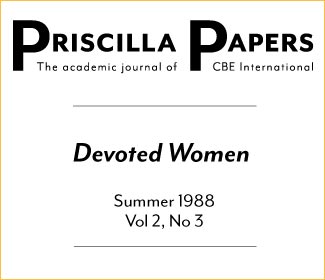 Women’s Place in the Church as Taught in Holy Scripture

Reproduced from The Chinese Recorder and Missionary Journal, vol. 27, no. 6, June 1896.

In the above passages of Scripture we have the following facts:

Dr. Bullinger has shewn very clearly in an article too long to quote here that prophecy is “to speak for God”; while Jeremy Taylor speaks of it as “preaching”; and the Word of God clearly tell us what is its purpose now (I Cor. 14:3,4), and their definition is very close to the examples given in God’s Word.

In the Old Testament we have very clear examples of women who prophesied, for example:

Huldah, a prophetess to whom the King Josiah sent to enquire in his trouble (II Chron. 34:22).

We have also a very full account of the words of Hannah, which appear to have been spoken in the house of the Lord (I Sam. 2).

In the New Testament, in accordance with the prophecy by Joel, we find an increasing number of women who prophesied together with those who “laboured in the Gospel,” and in this day we see the promised fact in Psalm 68:2 (Revised Version), actually taking place. “The women that publish the tidings are a great host.” Praise God for it!

In Luke’s Gospel are recorded the words of Elizabeth, who was filled with the Holy Spirit. The same Gospel also contains the words of Mary (chapter 1:41, 46-55). In Chapter 2:36 we have Anna, a prophetess, in the temple, and who “spake of Him to all them that looked for redemption in Jerusalem.” I suppose there were men, as well as women, who looked for redemption; hence she must have spoken to both sexes and in the temple. However few the “little flock” may have been, if she might do it then, surely any woman filled with the same spirit may do the same thing now, and in any place not more sacred that the temple was then.

Now as to preaching the Gospel, of “labouring in the Gospel.” Paul specially asks the Philippians (Ch. 4:3) to “help those women which laboured with me in the Gospel.” (Συνἠθλησαν, lit., fellow-athlete).

In Rom. 16 several such “labourers in the Gospel,” both men and women, are greeted or named. In the Revised Version, verse 1, Phoebe, a deaconess or minister (διακονον) of the Church of Cenchreae is commended.

In verse 3, Prisca (or Priscilla) and Aquila, “my fellow-workers in Christ Jesus,” are saluted; the woman being placed first, with evident significance, when spoken of as a worker in Christ, as also in Acts 18:26 (R. V.) when expounding to the learned Apollos the way of God more perfectly; but when spoken of simply as the wife of Aquila, she is put after her husband (Acts 18:2). So devoted were these two workers that they laid down their own necks for Paul’s life.

In verse 6 Mary, who bestowed much labor on you (on you “in Rome beloved of God.”)

Verse 7, Junia (a woman, if the A. V. be correct in this place – who is here, with Andronicus, mentioned as being of note among the apostles, not merely “known to the apostles,” as some have tried to twist this into – the word “of note” is the same as in Matthew 27:16, a ‘notable’ prisoner. Sixteen apostles are named in the New Testament, not including the same word translated “messenger.”

Verse 12, Tryphena and Tryphosa, who laboured in the Lord.

Persis (a woman) the beloved, who laboured much in the Lord.

Surely it is a distortion of simple and plain language to make the inspired records “laboured much in the Lord,” “laboured with me in the Gospel,” mean merely doing temporal work for others who laboured in the Gospel. We do not deny, but delight to own any temporal work for the Lord Jesus as acceptable to Him, and it will receive its reward; but let us call things by their right names, not distort the words used, “fellow-labourers in the Gospel,” from their true and simple sense.

Such then, are some of the women who “publish the tidings” and may God grant that their number may greatly increase, as already large numbers have done good work in the foreign field in addition to many noble women in our own land. Good were it if many of our evangelists had, like Paul, many such fellow labourers in the Gospel in their own work.

In I Tim. v. 1 if πρεσβυτερῳ is correctly translated “an elder” and we think it is, then in verse 2, πρεσβυτερας, “elder women,” ought to have consistently been translated “elderesses.”

We cannot overlook the fact of the testimony of the woman of Samaria in John 4, who so spoke to the men that many believed on Him because of her word. Would that every evangelist, male or female, might now so speak that “many believed on Him” through their word, and we should have fewer barren Gospel meetings. We cannot but fear that “tradition of the elders” and prejudice have had great weight with many in opposing a woman preaching God’s Word.

Two passages of Scripture have, however, stood in the way of many honest minds; and these two, imperfectly translated, have been set against all the numerous plain statements of God’s Word. The first is in I Cor. 14:34, “Let the women keep silence in the Churches; for it is not permitted unto them to speak (literally, to be speaking, or talking); but let them be in subjection, as also saith the law. And if they would learn anything (not ‘if they would pray or prophesy’) let them ask their own husbands at home; for it is shameful for a woman to speak (or be talking) in the Church.”

If the “keep silence” means that she is not to pray or prophesy, then it would equally forbid a woman to say “Amen,” or to sing in public worship. Yet, strange to say, many who will not allow her to prophesy or pray in the Church, which God has given direction how she is to do – with her head covered – will allow her to sing in the assembly, for which there is no special direction for her. Surely, in order to be consistent they should also forbid a woman to sing. He who merely quotes the words, “Let your women keep silence in the Churches,” apart from other Scriptures, would be as well to quote, “Let him keep silence in the Church” (Verse 28).

Nor must we so explain one part of Scripture as to contradict another. For the same Holy Spirit could not lead women to prophesy for the edification of the Church and give them direction to have their heads covered when they do so, and in the same epistle tell them not to do it. But what then is meant by the women keeping silence in the Church? In Eastern countries, where but few women can read at all, it is quite common for women in the meetings to sit in groups talking and asking questions of each other. This, says Paul, they may not do, but if they “wish to learn anything” (not if they wish to prophesy) “Let them ask their husbands at home; for it is a shame for a woman to be speaking (Gk. pres. inf.) in the Church.” In China the women are so talkative that for once that we have to tell men to be silent we have to tell the woman a dozen times, but we do not mean thereby that they are not to sing, pray or exhort as the Spirit leads them.

Another passage I have heard against women prophesying is I Tim. 2:12, “I permit not a woman to teach (‘in the Church’ is frequently added without any authority), nor to have dominion over a man, but to be in quietness” (R. V.). The words here translated “woman” and “man” are exactly the same words as are in Ch. 3:2 translated “wife” and “husband,” and evidently ought to be so here, in order to make proper sense of “if they continue,” etc., in verse 15 “they” referring not to men and women as such, but to wife and husband, (In Titus 2:3 women are to be “teachers of what is good,” καλοδιδασκαλους.

In Luke’s German version and in the French version this passage correctly reads, “I permit not a wife to teach nor have dominion over her husband (son mari), which clearly shows it to be simply a family matter and nothing to do with Church worship at all, for in Christ Jesus there is neither male nor female, but ye are all one in Christ. (Gal. 3:28)

One writer in opposing women preaching or teaching, has quoted II Tim. 2:2 thus “’The things thou hast heard of me…commit thou to faithful men’ (not women).” The word here translated “men” is άνθρωποις, the same word as that used in I Tim. 2:1, “prayers for all men,” and verse 4, God “willeth that all men should be saved.” If “men” in the above case means “not women,” as he says, then it would mean “not women” in the others cases, which would be a sad thing indeed for our souls.

Again, God has said, “Quench not the Spirit, despise not prophesying” (I Thes. 5:20). Does not this account for the awful barrenness of some Churches or assemblies where God has filled some of His “daughters” with the Spirit, but they have not been allowed to prophesy and edify those whom they could have helped, and thus the Holy Spirit has been quenched? “We do not allow it,” has been sufficient answer from those who could not gainsay God’s plain word.

Let us beware, lest in refusing to listen to those whom God has made His handmaids to deliver His Word in the Holy Spirit we turn aside rivers of living water from ourselves, and they flow elsewhere into hearts humble and low enough to receive them.

The accusation so often made, that women who preach neglect their homes, is utterly untrue in most cases; it might equally be said that men of business neglect their work when they preach the Gospel, or exhort in the Church. As to their loss of time, does it take any more time for a woman filled with the Spirit to give out God’s message than it does for her to sit and listen to some “stale manna” so often given to God’s children in the Churches? One meeting I heard of, where a few men and women had met on the Lord’s Day. None of the men were able to edify the others, and wisely kept silent; but a few women, well able to edify them in the Holy Spirit, were not allowed to speak; hence, after an hour’s silence, they all departed, and the Spirit grieved, – I had almost said departed too; for one never heard of a soul converted in that assembly.

Surely the life and labours of such women as Catherine Booth, whose influence reached the lives of awakening of many thousands of souls; Frances R. Havergal, Miss Weston among sailors, Mrs. Denning, who reached her thousands of souls, and other such women, have all testified to the fact that in Christ Jesus there is neither male nor female, and that God is willing to use either for His service, if only the vessel be clean and fit for the Master’s use.