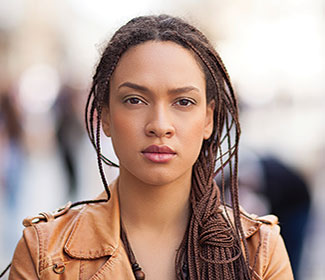 Author and poet Alice Walker first defined a “womanist” in her 1979 short story “Things Fall Apart.” In her 1983 book, In Search of Our Mothers’ Gardens, she provided an expanded definition of a womanist. Walker writes that womanist derives from womanish, an expression black mothers use for their female children who exhibit womanish, as opposed to girlish, behaviors and attitudes. Acting womanish means being responsible, serious, courageous, outrageous, and willful; wanting to be and acting grown-up. As a womanist, I am empowered to seriously and courageously speak truth to power; to responsibly attend to what is life-giving, freeing, and self-critical, as well as to that which diminishes, silences, obliterates, and tricks minoritized peoples into submission to oppressive texts, contexts, interpreters, and interpretations.

Womanism and/or black feminism (some women prefer the latter self-designation, although they are not synonymous) has always concerned itself with intersectionality or with the destruction of interconnected forms of oppression that impact black women’s lives (and other women of color) and their communities. Black women experience multiple forms of oppression, simultaneously. Such oppressions include racism, sexism, and classism. As a political act, womanist biblical interpretation seeks to critically engage, expose, and/or dismantle the interconnected oppressions found in biblical texts, contexts, or interpretations.

White feminism, as a political movement and as a perspective for critically interpreting biblical texts and contexts, has generally prioritized gender analysis and neglected race and class. Black women have not enjoyed the privilege of addressing gender to the exclusion of race or class. While womanism and white feminism are related, they are distinct. Walker’s definition states that “womanist is to feminist as purple to lavender.” The two are not identical, but they sometimes overlap in their agendas, sharing the goal of dismantling gender oppression in favor of human equality.

White feminism has a history of subordinating issues of race and class to white women’s gender concerns. For example, at the first women’s rights convention in Seneca Falls, New York in 1848, white women asserted the priority of sexism over abolition of slavery; black women activists were not invited to the convention. When white women marched for their right to work outside of the home, black women had been working “outside their homes” for years without pay. The enslavement of black people had greater impact on the lives of black women than gender oppression. Gender oppression that black women experienced was because of their status as slaves in America. As Sojourner Truth stated in her famous “Ain’t I a Woman” speech, black women worked as much and as hard as black men in the masters’ fields because they were black and enslaved. Slave masters also held total control over the bodies and sexuality of enslaved black women. They could be coerced into submitting to the sexual desires of white slave masters, raped, or forced to breed with male slaves in order to increase the master’s human property holdings.

Today, black women remain the lowest paid group in the United States, because of their race and their gender. This pay gap disparity continues to relegate black women disproportionately to the lowest socio-economic class. A recent study by the Journal of American Medical Association confirms that poverty is hazardous to people’s health; the wealthy have significantly longer life spans. African Americans are disproportionately and negatively impacted by poverty, food insecurity, and unemployment. The gender pay gap is significantly worse for women of color.

Also, black women who are victims of violent crimes receive less media attention than white women and are often dehumanized when their stories do make the news. Law enforcement officials count on media cooperation to help solve crimes. And if the crime and victim are characterized in ways that discourage sympathy, the public is less likely to cooperate and more likely to blame the victim.2

Social justice for black women and their communities continues to be a struggle against interlocking forms of oppression. Because of the interrelated impact of race, gender, and class on “black, brown, and yellow” lives and especially on the lives of women and children of color, women of color who ignore race, gender, or class issues do so to the detriment of the larger community. If a black male focuses on race while ignoring or participating in gender bias against black women, he is exercising his male privilege. If white women demand gender parity without regard for the impact of racial bias on black women, they exercise their privileged position as white women. When elite women of color focus on racial and gender bias without regard for the impact of classism on poor women, men, and children of any race, they are exercising class privilege.

Few women or people of color know privilege without oppression, and even less so for black people. The black church has been a place and source of survival, strength, health, community, culture, and privilege as well as oppression for black women. Many black women have a love-hate relationship with the black church.

Womanists are part of a tradition of capable women like Harriet Tubman, Ella Baker, Fannie Lou Hamer, Maya Angelou, Oprah Winfrey, and Michelle Obama. This tradition is as much about struggle as it is about achievement and capability. Confronted with much opposition in their homes and churches, nineteenth century black female preachers like Zilpha Elaw, Julia Foote, and Old Elisabeth asserted and fulfilled their calls to a public preaching ministry. They placed God’s self-revelation to them and God’s calling above the sexism of “mortal men.”

While black women called to pastoral ministry have made some inroads within the black church, they continue to be treated as second class citizens. Despite the surging numbers of black women attending and completing seminary education, few churches call them to be senior pastors; most still prefer male pastors and few male pastors openly or aggressively advocate for females to become senior pastors. I am always amazed at the men whom I teach in seminary that become senior pastors but continue to participate in and maintain the “good ole boys network,” to the exclusion of their female colleagues.

Implications and a biblical perspective on justice

So what are some implications for Christians for eliminating the interlocking forms of oppression that black women and others experience? Racism, sexism, classism, and other forms of oppression are violence. We should not expect black women and other people of color to absorb the violence of oppressive systems and the aggressions and microaggressions that flourish in such systems. Our silence in the presence of violence is violence, as implied by Jesus’ words on the cross, “My God, My God, why have you forsaken me?” (Mark 15:34). As I stated in my recent blog,

Our silence, our lack of protest helps to maintain a hierarchy of human worth wherein certain violated bodies, primarily brown, black, poor, non-Christian, other-gendered bodies, deserve little to no protest and thus we inflict violence upon violence. Our silence in the face of violence is violence. The blood soaked ground and those living in the throes of violence cry out, ‘my God, my God, why have you forsaken us?’ Silence is not an option, not for the godly, not for the humane, not for those of us who claim to be nonviolent!”
(womanistntprof.blogspot.com).

It is clear to me that our love of God will compel us to love our neighbors, to love our neighbors as we love ourselves. If we love God, we love what God loves; we develop a passion for what God is passionate about. God is passionate about justice. God is no respecter of persons (Deut. 10:17; Acts 10:34–35); God shows no favoritism based on race/ethnicity, gender, or class. Favoritism or bias necessarily engenders oppression and subordinates, “others,” and/or minoritizes peoples. God sides with the oppressed and minoritized. Black women (and men) have historically drawn upon Scripture to assert their equality before God. Acts 17:26 (“From one ancestor he made all nations to inhabit the whole earth, and he allotted the times of their existence and the boundaries of the places where they would live,” NRSV) is a favorite scripture that African Americans used to support human equality and to denounce racism and sexism. Civil Rights activists Fannie Lou Hamer interpreted Acts 17:26 to mean that all people are the same, sharing the same blood.

Historically, societies and institutions that value and strive for power, global status, and wealth have necessarily accomplished those goals on the backs of the vulnerable others different from themselves and by violent conquest. Historically, colonizing powers and/or empires and governments have used Christianity as a tool to conquer and enslave peoples and confiscate their lands and resources, propagating a gospel founded on theological rationales for such violence. Yet, in the Bible, we find testimony of a liberator God who hears the cries of the oppressed, acts to free the oppressed, and continues to call God’s people to love of neighbors and foreigners. The prophetic voice of God in the Bible consistently indicts Israel and other nations (all of whom are described as family, Amos 3:1–2) for the violence they committed against one another. I contend that God’s prophetic voice has remained unchanged in this regard. And as a womanist biblical scholar and as a Christian, I see my vocation as a continuation of this prophetic tradition.