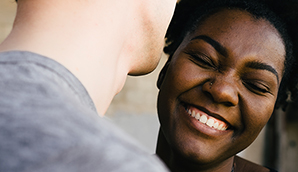 The Way God Intends It: Men And Women As Gospel Partners

Recently, the Barna group came out with the news that 61% of Christian women “love Jesus but not the church.”1 Why is that? Could it be because women have too often been denied influence and access?2

Something is wrong with how we are (or aren’t) partnering together in our communities of faith across gender lines. And, without question, truly equal partnership has been a struggle in the church for centuries.

Which is part of what makes the story of Boniface and Lioba so remarkable.

Boniface, a seventh century Anglo-Saxon monk, was by all accounts a gifted leader. His achievements included founding monasteries, church reform, and promoting the Benedictine rule. Toward the end of his life, Boniface followed Jesus’ call to share the gospel in dangerous territories, a move that resulted in his eventual martyrdom.

He was eighty at the time.

One other notable feature of Boniface’s ministry was his openness to partnering with women. Indeed, in an era where women were very much second-class citizens, Boniface struck up a partnership with a gifted female leader named Lioba.

Lioba was an abbess, and she was known for her holiness and her knowledge of Scripture. One writer testifies to Lioba’s fruitfulness, noting that she was an “abbess-founder, whose disciplines and daughter houses spread like good seed over new-plowed fields.”3

At one point, Boniface invited Lioba into greater leadership, and he became a fan. So much so that before his death, “Boniface requested that Lioba be buried in his tomb, so that as they had shared in the same missionary partnership, they might wait together for the resurrection.”

Beautiful, right? More than that, the story of Boniface and Lioba illustrates this fundamental truth:

The full and equal partnership of women and men in mission is the way God intends it.

We get this idea from the creation account in Genesis 1 and 2. In the garden, both Adam and Eve were created in God’s image. And it’s not as if Adam was given a greater allotment of the divine image. Instead, both humans have the full measure of God’s image, and it takes both women and men to truly reflect that image.

Further, the Genesis account tells us that Adam and Eve were created to rule together. They were to be co-regents, filling the earth and subduing it in full and equal partnership.

Of course, the beauty of Eden is forever marred in the fall. And part of the consequence of human sin is a power dynamic between the genders. Even so, the fact remains:

Male/female partnership is the way God intends it.

Despite the tragic effects of the curse, we see echoes of God’s creation intent in the Old Testament partnerships of prophetic siblings Moses and Miriam, of Rahab and the Israelite spies, and of judge Deborah and Barak, the reluctant general.

The way God intends it finds its further expression in the life and ministry of Jesus. In a time in history where rabbis daily thanked Yahweh that they weren’t born a woman, Jesus stands apart.4  Male/female partnership is Jesus’ method and practice.

Jesus welcomes Mary to sit at his feet as his disciple. And the woman at the well is empowered into the work of evangelism. And who does Jesus choose to be the first person to bear the message of the resurrection? Mary Magdalene. Evaluating Jesus’ practice with regard to women in his day, theologian Walter Wink notes, “Jesus violated the mores of his time in every single encounter with women recorded in the four Gospels.”5

And yet we really shouldn’t be surprised by Jesus’ practice. After all, male/female partnership is the way God intends it.

Sometimes, the Apostle Paul gets labeled as a misogynist. And, to be sure, there is important interpretive work to be done with some of Paul’s teachings.

Further, Paul practices what he preaches. So Junia is “prominent among the apostles,” Phoebe the deacon is “a benefactor of many and of myself as well,” and Euodia and Syntyche have “struggled beside [Paul] in the work of the gospel.”

Paul a misogynist? Not at all. Here’s how Cynthia Westfall puts it: “Paul particularly critiques and subverts the dominant culture’s construction of gender, sexuality and power.”6

Adam and Eve, Moses and Miriam, Jesus and Mary, Paul and Phoebe, Boniface and Lioba. All co-workers. All equal partners.

All the way God intends it.

Rob Dixon co-hosts the “Women & Men Leading Together: Stories from the Field” segment of CBE’s podcast, Mutuality Matters. Check it out here and subscribe!