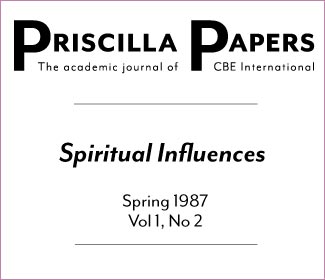 A Report on the Conference with Elaine Storkey

“The problem of patriarchy in the church is the problem of male as norm,” charged British author Elaine Storkey at a recent meeting of Christians for Biblical Equality (CBE) in St. Paul, Minnesota.

Whether in language and liturgy, structure and tradition, stereotypes of men and women, values or definitions about what constitutes knowledge, patriarchy permeates the Christian church, she observed. “Actually, the church takes its cue from the secular world. We’re incorporating secular humanism into our churches.”

Storkey, author of What’s Right with Feminism? (Eerdmans), is a spokesperson for Men Women and God, an organization affiliated with John Stott’s London Institute of Contemporary Christianity. A sociologist, philosopher, wife and mother, Storkey attempted to put some of the complex facets of the women’s movement into perspective for Christians who “remain frightened, yet challenged, by what feminists are saying today.”

Noting that 42 percent of all Americans reportedly attend church, she asked, “Where is the transforming work of the Gospel in this culture? We still allow stereotypes of the American male to be absorbed into our churches. We’ve constructed a model of leadership that depends on the qualities of the stereotyped American male – ruthless, authoritarian, aggressive. We’ve soaked in the cultural values of secular humanism to such a degree that our churches are unrecognizable.”

Storkey see s American Christians as caught up in the contradiction of trying to combine “life, liberty, and the pursuit of happiness” with a Gospel that says whoever follows Christ must take up his cross. “You think you can have it both ways – a comfortable Christianity combined with the good life. You think materialism and healthy Christianity go hand-in-hand.”

Exploring the issue of innate differences between male and female, the way in which they together image God, Storkey looked at the perspective of the essentialists, those who see man and woman as having different genetic needs and make-ups, and that of the relativists who see no differences between the sexes.

Most Christians are happy with the essentialists, she said. “Both men and women are in God’s image, but men are more in God’s image. God is more male than female. Woman is a derivative image. If we want to know what God is like, we look to men.” Such a view, Storkey noted, always leads to patriarchy.

Christian relativists, on the other hand, see both male and female as in God’s image because both are human. “Sex roles are relative,” she said, “and so is sexual preference. Our sexuality is our own affair; we can write our own scripts.” Soon, however, such a position leads to self-interest, indulgence and promiscuity.

“Equally untenable is the view that we image God through our complementarity,” she continued. “We share human attributes of a divine person who is both male and female.” This emphasis upon God’s androgyny leads to a “deification of sex,” Storkey claimed.

She proposes that God is neither male nor female, nor yet a combination of the two. “Yahweh is distinct, above and beyond gender. The polarity of sex belongs to the created order, not the Creator. Sexuality is rooted in the creation, as the way in which we grow, procreate, express our unity. But God transcends his creation; He is not absorbed in it.”

That truth does not then give license for “writing our own sexual scripts,” Storkey warns. “We suffer the consequences of not living up to the standards God has laid down for us.”

So how do we image God? Not in our sexuality, she says, but in our humanness – in our capacity to think, love, feel, enact justice. “All the things God has put in our hearts. People are the only image of God. We can be marred or distorted, but not destroyed. To be human is to image God.”

Women, therefore, are no less in the image of God than are men. “We are both full images of God,” Storkey concludes. And it is in Christ that we see the image of God mirrored most fully. “We need a restored image of God, and Jesus has come to show us what it can look like.”

Christ, then is the model that must be followed in the quest for equality within the church. “He kept silent in front of his persecutors, not because they weren’t wrong, but because his silence called out for justice. His silence made a very strong point,” Storkey observed. But, she noted, Jesus also wept. “He wasn’t afraid of being unmanly.”

And Jesus rebuked. “Jesus provides a sobering example for both men and women. Most often it was the male religious leaders he was rebuking, and the women he was loving, supporting, drawing out.”

The challenge facing those committed to biblical equality is to work for both peace and justice within the church, she said. “Peace without justice is not peace, nor is it biblical. We must be patient, not passive. Women must repent of the tendency to please, to take their cues from men. It means being prepared to hear God’s voice speaking, not that of men. We must not let men define our walk with Christ.”

In the fight of biblical equality, witch hunts, caricatures, cheap jokes, and sitting in judgment on fellow Christians are “not for us,” she said. “We are to notice the sin in our own lives and call that to account. We must not go forward in pride and self assurance, but with the humility and compassion that holds really firm to what Jesus says.”

Storkey concluded that “no woman can serve two mistresses. We dare not work for peace and justice in the patriarchal church until we ourselves have honored the name of Jesus Christ by offering ourselves up. We must combine the love of Jesus with the unflinching standards that He holds up for us as our example.”

A lecturer in sociology and philosophy at Oak Hill College and Open University, London, Storkey has been a visiting professor at Covenant College, Lookout Mountain, TN, and at Calvin College, Grand Rapids, MI. She is a staff member of the London Institute for Contemporary Christianity.