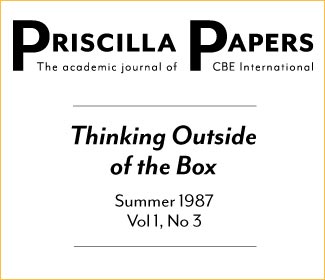 A Plea for Restraint

At the evangelical colloquium on women and the Bible October 9-11, 1984 in Oakbrook, Illinois (see the papers in Women, Authority, and the Bible, ed. A. Mickelsen, Inter Varsity Press, 1986), I introduced the section on biblical hermeneutics (the art of interpreting Scripture) by saying that the most crucial issues for evangelicals in the modern world of biblical studies were not in the arena of the so-called “Battle for the Bible” (inerrancy and authority). Important as these considerations may be, the hermeneutical issues are still more critical.

In terms of the on-going debate between evangelicals who limit the role of women in church and society, and the “evangelical feminists” who do not, these issues are central. The process of interpreting Scripture and of making an application to life today is the crucial source of difference between the camps. Within this process lies the key to the resolution of what has frequently been called a “critical evangelical impasse.” This is quite clear in terms of three Pauline texts which most apparently prevent women from teaching, preaching, or assuming positions of authority in the Church: I Co. 11:2-16; I Cor. 14:33b-35; I Tim. 2:8-15.

The point of this excursus is to urge caution and restraint in our frequent evangelical tendency to absolutize elements within these texts and to find within them indisputable reason for limiting women’s exercise of authority. By “absolutize” 1 mean to declare that this commandment is always to be enforced in every situation. A little thought will show that a number of New Testament commandments are no longer practised by modem Christians (Acts 15:20,29; Rom. 16:16; I Cor.16:20; II Cor. 13:12; I Peter 3:3; 5:14). The church came to understand that these directives were given to be enforced in specific situations which no longer exist today.

Let us note a few general reasons for restraint. Two of the texts with which we are concerned (I Cor. 11 and I Cor. 14) occur in a segment of an obviously “occasional 1etter’, (written to address certain local church conditions). This section primarily confronts various disorders in the worship of the Corinthian congregation (I Cor. 11-14). This in itself should suggest that since historically conditioned and culturally limited situations are the chief focus, we ought to be cautious about what we absolutize.

The I Tim. 2:8-15 passage is found in a context of polemic against heretical teaching by women and their male mentors in the church of Ephesus. Here Paul instructs Timothy in ways to deal with the heretical teachers. Students of the women’s materials in this epistle seldom observe the series of connective words which tie the materials of I Tim. 2:1-15 with the problems of a clearly heretical nature (discussed in I Tim. 1:3-7 and 18-20). How to deal with heretical teaching is the major focus of the book. Note that the connectives in 2: 1 (“therefore”) and 2:8 (also “therefore”) clearly link the segment on women (vv. 9-15) with the matter of heretical teaching in the Ephesian congregations – and thereby also the congregations in Asia Minor which looked to Ephesus for spiritual direction.

Consider the Circumstances in Which These Texts Were Written

Let us also note some clearly cultural elements in these three texts: In I Cor. 11:2-16 the focus is on head-coverings which, when worn, allowed women the freedom to pray and prophecy in the worship of the Corinthian congregations. A larger issue may be that of reversal of sex roles by men and women of ecstatic persuasion in Corinthian churches.

In I Cor. 14:33-35, which appears to tell women to be “silent” in church meetings, the translation “quiet” would seem to make more sense. If nothing more is going on, at least the women of Corinth are loudly inquiring of their husbands what the preaching and teaching means. Paul tells them to refrain from their questions until they may ask their husbands at home (v. 35). It seems to us that much more clamor and noise originated from the women’s section, and religious clamor was an important ingredient of these pre-Christian worship practices. They were not going to be decorous and silent just because they had been converted to Christ. All this is set in a larger context of the misuse of gifts of tongues and prophesying.

In the I Tim. 2 text, the chief focus for traditional limitations on female participation, there are the obvious cultural elements of men lifting up holy hands in prayer (v.8) and modest adornment of women (vv. 910). None of these cultural elements are vexing problems for most modern congregations, and yet they are closely joined to the sanctions of vv. 11-12. The cultural elements are almost universally ignored when people deal with the sanctions, and the verse about woman being “saved by child-bearing” (v. 15) is ignored most often. All of this culturally relative material should cause us to see the caution flag waving.

Here I want to focus on difficult lines of argumentation used by Paul in these texts. (We do not accept the frequently cited rejections of these texts as not truly Pauline. There is not space here to go into the various reasons for finding them authentic.) Let us look at the Eve argument in I Tim. 2:13-14. This text is closely tied to the locus classicus (vv. 11-12), but it is frequently ignored because of its obvious difficulties.

Paul’s use of the story of Eve’s temptation from Genesis 3 is puzzling as authoritative support for his banning women from teaching or from exercising domineering authority over men (husbands?). Of course he was indebted to contemporary Jewish exegesis which tended to blame Eve for the spiritual predicament of the human race, but Paul was not usually given to following the oft-times wild excesses of Midrashic polemic.

He says that “Adam was formed first, then Eve; and Adam was not deceived, but the woman was deceived and became a transgressor” (vv. 13-14 RSV). This is at best an ad hoc argument used to support the sanction against women teaching and exercising authority. The appeal to the priority of the male is not founded on any so-called order of creation, though Genesis 2 is its source.

Not only is there no indication of priority in Gen. 1, but in Gen. 2 nothing is made of the fact that the male was created before the female. It could be said that maleness had no significance until there was femaleness.

It frequently has been noted that if priority was a significant feature in the orders of creation, the birds and animals would have to be viewed as superior to man because of their anterior creation. In Gen. 2 the emphasis is on man’s aloneness and that no solution for that problem can be found in the animal kingdom.

The focus of Gen. 2 is not upon the superiority of the man who has the power to name the animals and the woman. (He can’t really name her until after the fall.) Rather the emphasis is upon the recognition that animals cannot fulfil his need for companionship, and his recognition that the woman can and does. If there is any emphasis on primacy, it is on the woman’s creation as the being who completes the man and satisfies his need for a counterpart. She is at the summit of an ascending scale of creative worth if anything is to be made of progression in the stories of creation.

When Paul uses the primacy argument with perhaps more effect in I Cor. 11, he knows that he has to counterbalance it with the truth that since Eve’s creation from Adam, all men have come from women. Paul in essence admits that the primacy argument is an ad hoc argument and cannot be pressed, and he backs off from it (I Cor. 11: 11-12).

The argument in I Tim. 12:13-14 that Adam was not deceived, but that the woman was deceived and became a transgressor is largely softened and somewhat negated. Paul knows perfectly well that Adam was standing at Eve’s side while the serpent orchestrated the temptation scenario. David Scholer observes that the serpent addressed the women with the plural “you” (Gen. 3:1-7). The Hebrew and Septuagint texts of Gen. 3:6 state that Adam was standing at Eve’s side. This is often left out of English translations such as the RSV. The Hebrew reads:

… she took of its fruit and ate; and also gave some to her husband with her, and he ate.

Paul knew this, yet he chose on this occasion to ignore it. If Eve was deceived, Adam sinned knowingly. It was to him, before the creation of woman, that God forbade his eating of the fruit of the tree of the knowledge of good and evil (Gen. 2:16-17). The very conservative, non-feminist commentator on I Timothy in the old Expositors Greek Testament responds thus to the strange assumption by Paul of Adam’s superiority:

The intellectual superior who sins against light may be morally inferior to him who stumbles in the dusk. (Vol. IV, p. 109)

David Scholer suggests that Paul is being selective here. If Eve was deceived and became a transgressor, Adam also became a transgressor since he knew what God had actually said. He “listened to the voice of his wife,” (Gen 3:17) and not the voice of God and made no attempt to correct the serpent’s twisting and warping of God’s words. Adam could well be said to have been the more culpable. Paul knew this and, as has been often observed, when he wants to discuss the origin of human sin in profoundly theological terms, he lays the guilt squarely at Adam’s door (Rom. 5; I Cor. 15).

Paul leaves all this well known and most important truth out of his I Tim. 2:13-14 polemic on purpose. He is being selective in order to make a point-and his argumentation is very much ad hoc and not of universal application, at least at the point of vv. 13-14.

We should, in light of these hermeneutical difficulties, be very careful not to absolutize such texts too soon. We must beware of divorcing them from their obviously cultural and historical settings. The settings have to do with local first century church problems. The central truths of these texts, however we view them, are butressed by arguments that are very difficult and very limited to first century A.D. modes of thought and polemic.

This should lead us to be restrained in our efforts to make universal application of them for our own day. The unquestionably universal elements in them are clear – Paul’s “God is not the God of confusion … let all things be done decently and in order” is of more certain universality than “let women keep silent in the churches.”