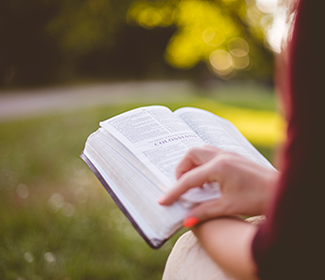 Turn on cable news or open a web browser and you will be inundated with conflicting views on current events. Politicians and media figures obscure the truth in order to elevate one philosophy or another. Anything one disagrees with is “fake news.”

This pattern is not new. In the church, patriarchy has long been fueled by an obscured, partial vision of the truth. Church culture wrongly obsesses over the masculine in its theology, language, and the heroes it celebrates. This prevents the good news of Jesus from taking hold. It is not just women who are hurt, but the church and its ability to recognize and embody Christ.

Male leaders throughout the centuries have devalued women in their theology. Chrysostom called women “weak and fickle.” Augustine said that male rule over women was the natural order of creation. John Knox said that women are naturally weak, frail, and foolish, and that women’s place is beneath men. John Piper claims that Christianity is meant to have a masculine feel. Such ideas are said to come from Scripture, but is this true?

In the Old and New Testaments, God calls his people to do better than the patriarchal world around them. Even more, women play an instrumental role in carrying out God’s work and leading God’s people. Jesus celebrated a woman for learning at his feet, which contradicted gender norms for women. He entrusted the good news to the Samaritan woman—the first Christian evangelist. Paul celebrated women deacons, co-workers, teachers, and apostles.

Any theology that elevates men over women on the basis of sex falls short of the biblical standard.

For too long, language in churches has wrongly centered men. Some leaders are so concerned with enforcing a masculine Christianity that they make God out to be masculine because God is called “Father.” They forget that the Bible uses a rich variety of images and metaphors for God—a mother, a she-bear, a hen, a woman looking for a lost coin. Many male theologians, including Clement of Alexandria, Chrysostom, and Anselm have followed Scripture’s lead and used feminine imagery for God. 1

Even Bible translations are skewed. Where the original language refers to groups of men and women, some insist that we use the masculine in English—men, brothers, sons, and so on. This obscures the meaning of Scripture in favor of masculine language. What’s more, traditional translations use words like “helpmeet” or “head” that convey a different meaning in English than the original languages suggest. Such errors undergird the “biblical” case for patriarchy.

Our language must be accurate, whether or not it supports our gender agendas.

When was the last time you heard a female leader in Scripture, history, or church work celebrated? Too many Christians are unaware of the female heroes of the faith. For example, just 2% of all the history material published by the Evangelical Theological Society (ETS) in the past 30 years focuses on women. Compared to just 29 ETS articles or presentations on women’s history during that time, 137 were on Jonathan Edwards alone! 2

It is time we recognized women. Esther, Deborah, and Jael saved their people. Huldah gave God’s word to the king. Mary gave birth to the Christ. Phoebe was a deacon, Priscilla taught Apollos, Junia was an apostle. Jerome gets the credit for creating the Vulgate, but it was a team effort with Paula. Saint Nino, Teresa de Avila, Hildegard of Bingen, Julian of Norwich, and others were leaders in the church. Early evangelicals like Katharine Bushnell worked to end poverty, slavery, and sexual abuse. Women have always been a vital part of God’s story. We cannot fully know God or appreciate God’s work until we see and celebrate them.

In a world where the lines between truth and fiction have become blurred, it is more important than ever that we treat our theology and our faith with the utmost respect. That means learning about and from women, using gender-accurate language, and remembering the legacy of faithful men and women. This is not fake news, but good news.

2. Chesna Hinkley, “‘Acknowledge Those Who Work Hard among You’: The Absence of Women’s Work in Complementarian Seminary Curricula” in Eyes to See and Ears to Hear Women (Minneapolis: CBE International, 2018), 37.

This article appeared in “Everyday Sexism and What Christians Should Do About It,” the Spring 2019 issue of Mutuality magazine. Read the full issue here.

Tweet
PrevPreviousReflect With Us: Words of Freedom
NextSexism is Spiritual: How Patriarchy Cripples the Body of ChristNext