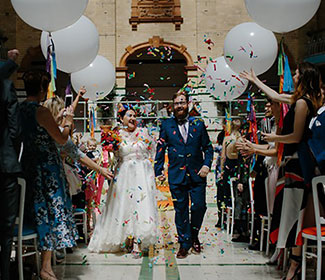 The Power of (More Than) Two

Dave and Bethy were complete strangers when they said “I do” in 1998. Having never met before, they promised to love one another until separated by death. Thus far, they’ve been successful! Now the parents of four, the couple has decided to renew their vows after learning that Dave has inoperable cancer. According to Bethy and Dave, “our great love story” did not begin because of physical attraction. Instead, their decision to marry was based on their trust in a group of devoted friends.

What began as a joke tested an ancient practice—the power of community to identify compatibility. Dave’s friends ran a series of newspaper ads announcing his eligibility. A surprising number of women agreed to be surveyed and interviewed. Because Bethy demonstrated the strongest commitment to grow their relationship, she was selected as the most suitable spouse, and the couple agreed to marry. While some called their public wedding a “spectacle,” Dave and Bethy believe their marriage has been nothing short of “spectacular.” Though viewed by Western critics today as foolish, arranged marriages were the foundation of ancient family and political life. Many cultures continue the practice today.

I have several dear friends in India whose spouses were identified by their families and communities. As Christians, their parents invited church leaders to assist in finding godly spouses for them. And, their marriages are happy and their lives are a blessing to many. In my own culture, my father often introduced me to “good” Christian Lebanese families with, coincidently, sons about my age. Once I realized his purposes, I quickly redirected the conversation to my immediate plans to travel and complete graduate school. Though proud of his independent and aspiring daughter, my father feared that by making choices independent of a loving community, I would become isolated and vulnerable. We now realize how harmful isolation is not only to individuals but also to married couples.

For more than thirty years, marriage researchers at Prepare-Enrich have shown that couples without family or community support have less stable marriages. And according to health researchers, people without close social networks are 30% more likely to die at an earlier age. Embedded in cultures like my father’s is an awareness that communities, especially communities of faith, provide an essential nurture apart from which families, marriages, and faith itself fail to flourish.

Whether married or single, Christian faith is a social faith. It knits everyone into communities for support and service. In as much as each believer is united to Christ, the head of the church, we are also united to the members of Christ’s body, the church. Our union with Christ and the church creates a network for human flourishing, because each member of Christ’s body is gifted with abilities necessary for the thriving of others regardless of gender. The giving and receiving of spiritual gifts within the family of God is essential in strengthening giver and receiver alike. For this reason, “alone” is not only the most terrifying word in any language, but was also the only “not good” in a perfect world (Gen. 2:18).

Without Eve, Adam was busy naming and ruling over the animals, but his aloneness persisted, because among them, no suitable helper was found. His strong rescue came from the woman, an arranged marriage orchestrated by our triune God. She alone could end Adam’s aloneness, and he recognized his true partner immediately. With first human words in Scripture, Adam sang, “She bone of my bone and flesh of my flesh” (Gen. 2:23). Created in God’s image, two are always greater than the sum of their parts. As Christ said, “Where two or three gather in my name, there am I with them” (Matt. 18:20). Adam and Eve were God’s holy alliance. Together they formed the first faith community, and jointly they governed the earth. And, this, God said was very good.

Ever since, marriages and communities are intended as places of knowing and being known as we give and receive God’s gifts in another. Is arranged marriage the solution to alone-ness? Absolutely not! But, it can demonstrate the power of authentic community to know, honor, and cherish us enough to recognize a compatible spouse.

Lives flourish in serving others, but grow weak in isolation because humans were not made for themselves alone. Dave and Bethy were brave enough to risk a commitment beside a loving community of friends. It is indeed very good that Christ called us to community, because when two or more are gathered, God’s presence and power does more than we dream or imagine possible.