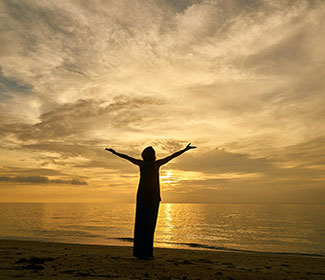 Come and Get Me!

“Let them come after me,” said Tiger Woods about his competitors when interviewed as to his strategy on holding his 12-point lead at the U.S. Open last summer. “I don’t plan on going to them.” That’s how I feel as a woman: confident in the scriptural knowledge of who I am.

God has given me a good, inquiring mind. I love to study the Scriptures and follow the texts on Sunday mornings in my Greek New Testament. Often I interact strongly with the messages I hear and ask questions or challenge an interpretation, unmindful of my sex. There have been times in the past when I have been knocked down by the insinuation that women “don’t go there.” And there have been times when I have disqualified myself and my opinions because, when push comes to shove, aren’t women supposed to be silent?

A number of years ago, events transpired in my life that left me feeling bereft and powerless. We had been participating in a home schooling program that operated on rigid chain-of-command principles. We believe in authority, but when our son had a serious run-in with said authority, we quickly joined him as victims of a harsh, unjust system. I began to question the right of any church or para-church organization to exercise such damaging control over people. My quest led me to Katharine Bushnell’s book, God’s Word to Women.

I was much bolstered in my courage. Scripture began to open for me and I could see that the teachings meant to put me “in my place” were wrong, even evil. The knowledge I’ve gained of who I am in Christ has been valuable. However, it’s the use of that knowledge which has been absolutely liberating.

I find myself wandering more and more into the once undisputed territory of male ecclesiastical dominance. I find myself challenging, not necessarily the men, but the products of their scholarship that don’t seem to square with what Scripture states.

Recently the subject of the Olivet discourse in Matthew 24 came up in our Sunday School class. Red lights flashed when the pastor prefaced his presentation by stating that this chapter was not for the church but only for the nation of Israel. I have studied this subject much and was convinced that the espoused view was wrong. To not speak up would have given the impression that I was in agreement, so I took a deep breath and challenged this view.

The people gasped as I stated, “I don’t believe that is the truth! What if it is not true? Just what if?” It was exciting to know that I challenged a cherished tradition by declaring, “We need to open ourselves to the possibility that this is not truth and to restudy this portion of Scripture.”

“But scholars — far better scholars than we could ever hope to be — have studied and debated these things for years,” my pastor refuted me. “We need to respect their findings.” I felt that what he really meant was: How can you, a woman, challenge these long-revered statements? I did get the attention of the Sunday School class and the pastor, although it wasn’t necessarily the kind of attention I relish. But for me, to champion Christ is always more important than tripping over my gender and hiding in silence.

This is the important point: Without the knowledge of who I am as a woman in Christ rooted deep within me, it can be well-nigh impossible to obey God rather than man. Man and tradition can be forces so powerful that if I am not absolutely convinced of my equality and freedom before God and man, I may be guilty of bowing to the creature. Without my having the “woman issue” settled first, it becomes easy to be automatically delegated to the back lines. But I know that the front line is where my Lord wants me to be!

The very process of studying (perhaps twice as hard as a man would study) “to show myself a workman … handling accurately the word of truth” (2 Timothy 2:15), has had the byproduct of launching me beyond my gender into the stratosphere of that place where “there is neither Jew nor Greek, neither slave nor free man, neither male nor female,” where all are one in Christ Jesus (Gal. 3:28).

I have no intention on going back to them who would muzzle me, for Christ has set me free! Like Tiger Woods I thought, “Let them come after me! I don’t plan on going to them.”

PrevPreviousMarching to the Beat of Different Drums
NextA Celebration of SinglenessNext