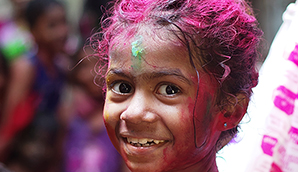 One of my daughters recently commented about her niece, “You can actually see on the baby’s face when she is learning something, processing something.” And, this is true! You can see, on her face, in her eyes, and in her body language, her anticipation of the visual and musical patterns and sequences. When we view these videos with her, she is wonderfully enthralled.

Now, my granddaughter is learning much from these genius baby enchantments, but she is also learning things that were probably not intended by the creators of this specific video. For example, she is learning about gender through the presentation of anthropomorphized elements of nature.

Let me explain. The bird, the seed, and the tree are not humanized. Conversely, the sky elements are all humanized. The sun, moon, raincloud, raindrops, stars, and even the umbrellas that float and sway past have eyes and smiling mouths. Interestingly, the sky elements are not only humanized, but they are clearly gendered. Males are depicted with normative human features: eyes and mouths. However, females are depicted with additional feminized features: their eyes have long dark lashes.

Those of us who grew up with classics like Bugs Bunny—which I love in spite of the following—are familiar with the presentation of male characters as the plentiful normative gender, while females are at best, a feminized minority, and at worst, sexualized robots. For those of you who grew up with more recent cartoons, I am positive you can provide your own examples of this phenomenon.

Now in the case of this specific baby sensory video, the ratio of male to female humanized elements is not as stark as a Bugs Bunny cartoon. Females are not completely absent or marginalized. Still, the male elements are the majority: the moon, sun, raindrops, and umbrellas all appear to be male, while the cloud and a handful of stars all appear female.

Before I lose anyone who thinks that I’m overreacting to baby videos and cartoons, and that they cannot possibly be as harmful as I have suggested, let me clarify. The video analyzed above is innocuous and will not harm or impair my granddaughter.

Yet, as she grows, she will be bombarded by all the faulty messages of our broader culture and our church cultures. And, unlike the video, the resulting cacophony is potentially debilitating to not only her, but all our youth, both females and males.

Some of the most insidious messages about gender in our churches are communicated through silence. Even Christian communities that adhere to an egalitarian theology may affirm the erroneous belief that females are worth less than males. As I’ve written elsewhere, “If not a deliberate focus, it can be easy for pastors to unintentionally avoid preaching on women; in the Old Testament, named men outnumber women by about 10 to 1, and women are also far outnumbered in the New Testament.”

Furthermore, when pastors do preach on female characters, the message is often directed exclusively at women, as if men cannot learn from female Bible figures. Think Proverbs 31 for Mother’s Day, or sermons on Ruth and Esther. However, when pastors preach on male biblical characters, the sermon is usually directed at both men and women, implying that males are human, and anything that is focused on them is of value to everyone. Meanwhile, anything that is focused on females is merely feminine, and therefore, not quite fully human or relevant to males.

Just for fun, when was the last time you heard or preached a sermon based on a biblical female character that was intended as a model of healthy engagement with God for both males and females? If it was recently, then excellent!

Such sermons communicate female value simply through the sanctioning of female subjects to take up sacred time and space.

Even so, we still have a long way to go.