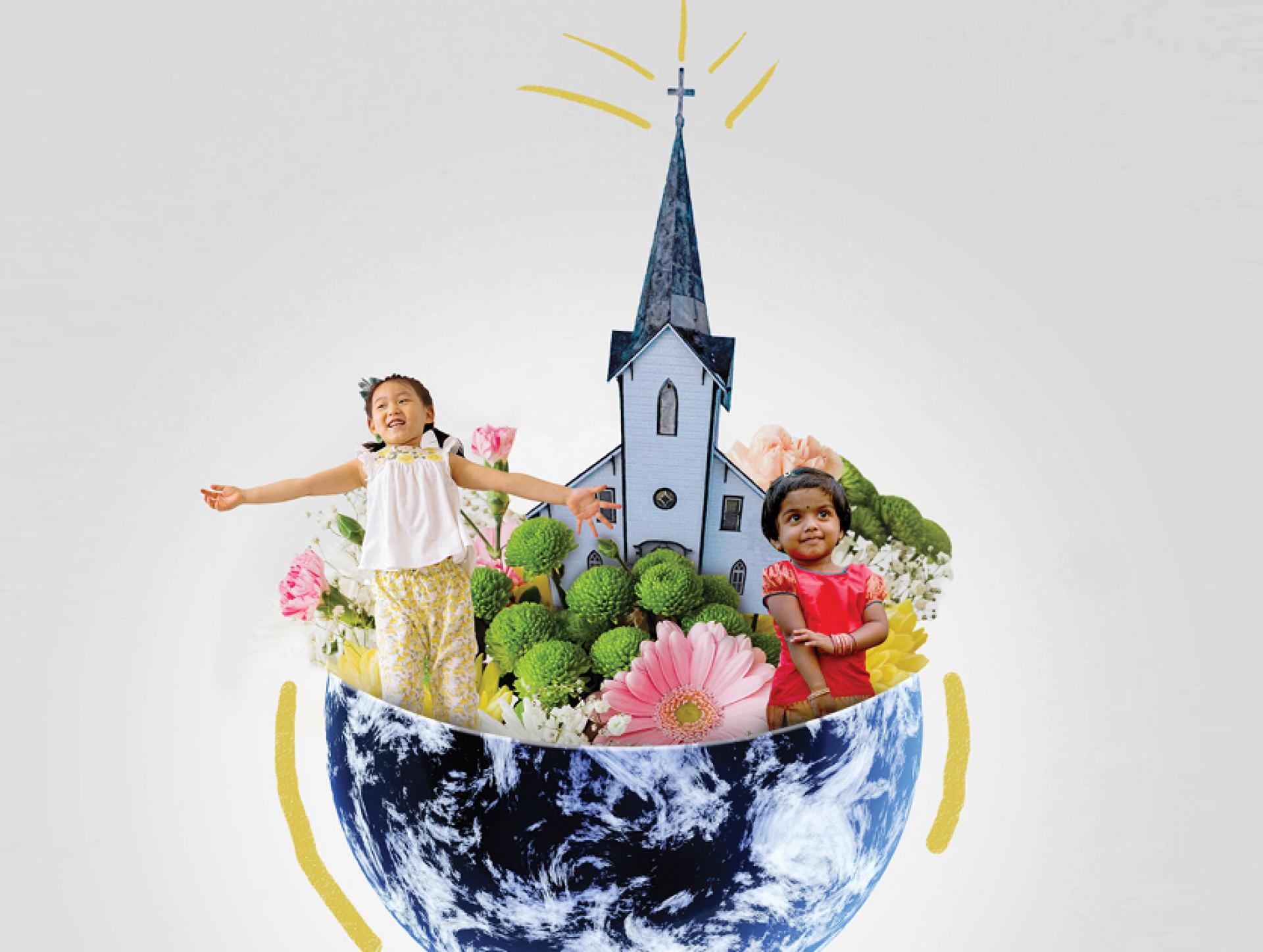 My family’s interracial, international adoption journey presents us with many lessons learned and the opportunity to move closer to the fullness of Galatians 3:28. I’m looking forward to sharing those lessons in Atlanta at CBE’s 2022 International Conference during my workshop, “Parenting Toward Galatians 3:28: Lessons Learned Through Interracial, International Adoption.” For now, I offer a preview that begins, expectedly, in Galatians.

At the end of Galatians 3, Paul presents a baptismal creed that mixes metaphors of family with Jewish election to create a new reality for believers in Christ. Jesus’s bodily representation of the religious elect—male, free, and Jewish—overturned exclusive election to now include the woman, the slave, and the Gentile.1 Beyond just becoming part of the religious elect, their unique identities were elevated as equal parts of the family, Abraham’s offspring (Gal. 3:29).

Paul spent a lot of time talking about the family of faith, specifically encouraging and praising its diversity and unique giftings. In another metaphor he teaches that our baptism into the Holy Spirit makes us one body, but it is our differences—and here he references nationality and class—that make us a functional body (1 Cor. 12:12–27). We, the family and body of God, flourish best when all our differences are honored.

Women and Girls Are Excluded Globally

As a woman, I intuitively understand that when women are excluded or limited, the church—the family of God—suffers. I understand why women from my generation are leaving the church in higher numbers than any other demographic: we have been hurt by the exclusion.2 Yet perhaps the experience that best helped me understand women’s global exclusion was my summer college internship in rural North India.

India has one of the lowest ratios of girls to boys in the world.3 Sex-based abortions, though illegal, are regularly performed to kill baby girls. Girls born alive are killed or neglected in the hopes they’ll die. I witnessed and heard doctors’ heartbroken testimonies of husbands who allowed their ill pregnant wives to die rather than allowing simple healthcare interventions. When I was interning in the hospital, I watched mothers sob at the birth of a baby girl, while others celebrated the birth of a boy.

Pandita Ramabai, a famous Hindu religious scholar in the late 1800s, attributed the severe discrimination against girls to the Hindu belief system that excludes females from moksha, or salvation.4 Ramabai converted to Christianity because she was convinced that Jesus was good news for women. As she said, “For some years after my baptism, I was comparatively happy to think that I had found a religion which gave its privileges equally to men and women; there was no distinction of caste, colour, or sex made in it.”5 Like Ramabai, the Indian context revealed to me just how radical Jesus’s good news is for women. Paul’s inclusion of women in Galatians 3:28 only confirms this good news.

When my husband and I married, rather than having children through the usual route, we decided to adopt. By then I had earned my master’s in public health and devoted three more years of my life to working in rural North India. Part of my responsibilities had included overseeing adolescent girls’ clubs and literacy classes. Time and time again I would meet a brilliant young girl who had been deprived of education and thought it radical to dream that she could learn to read. I mourned not only for her and her lost opportunities, but for me and our world. What had we missed in scientific breakthroughs, inventions, new ideas, and spiritual nurture when as a world we turned our back on these girls? It was in these rural Indian villages that I knew if a low-caste birth mother made the courageous decision to save her daughter’s life and get her to an orphanage, I wanted to join in that loving act and give her daughter a chance.

Meanwhile, the one-child policy was still in effect in China. The brutality of this law pushed parents to abort or kill additional children. Child abandonment was illegal. When forced to choose, families submitted to their underlying belief system which required a boy to carry on the family name and ancestral rights.6 But unlike in India, this resulted in a deluge of girls in their orphanages. This spoke to another truth—thousands and thousands of birth mothers had taken their lives in their hands, defying the law and strict penalties, to ensure their baby girls made it to orphanages. Though Moses’s mother is the first recorded woman to courageously defy government edicts to save her baby’s life, her story rings true to mothers today. Again, my husband and I wanted to be on the side of these courageous mothers risking their lives in love to give their baby girls a hope and a future.

Naturally, we decided to adopt girls from China and India.

Learning Inclusion and Diversity as an Adoptive Family of Faith

All that to say, I understood the power of Galatians 3:28’s inclusion of women. The deepest and most intimate parts of our faith compelled us to enter where we saw our faith most violated. And to the credit of our family of faith, we were just one part of a wave of Christian families around the world entering this broken situation, adopting these babies, and emptying the orphanages. Not only does this generation of adopted Asian daughters represent deadly sexism still alive and well in our world, but their adoptive families also indicate that, like the earliest Christians, they intuitively understand the counter-cultural value Jesus placed on females. Without complicated theological arguments, the worldwide church family replicated Jesus’s values through adoption.

Despite that intuitive understanding, my husband and I have come to recognize that we have much to learn. While I can intimately identify with the implications of Galatians 3:28 for women, it has taken raising my girls to help me better understand how it rings true through not just gender, but also race and class. What I had not initially appreciated was the intersectionality and inseparability of their sex and their race. Of course, I understood that they were girls and that they were Chinese and Indian, meaning that their eyes, noses, and skin colors did not match the current American majority population. But I did not know how these differences shaped their lived experiences.

My older daughter, at just five years old, could see what I could not. When asked to draw a picture of herself, she drew a blonde-haired girl who looked a lot like me, her teacher, and her classmates. She did not see herself represented in her small world. For the first time I began to notice what she saw, and my discomfort grew. My daughter’s artwork simply reflected our own at home and what she saw at church: white-washed Saint Nicholas (from Turkey), Jesus (from the Middle East), and Simon of Cyrene (from modern-day Libya in North Africa), to name just a few.

My daughters’ lived experiences as females of color create perspectives that could never be the same as mine and, quite honestly, never should be. Though my daughters needed family, we needed all their unique differences. Perhaps there is a divine reason that when Gentiles were added into the family of faith, they were not required to become cultural Jews. Instead, the faith stretched and grew to include and redeem the uniqueness of the Gentile populations, growing pains included.

Examples of Diversity and Inclusion from the Early Church

Our family of faith has a history, starting with the earliest Christians, of taking discrimination seriously. When we are part of the dominant culture, it is hard to see, understand, and include people who are different from ourselves, and the Bible reveals that the early church struggled in much the same way we do. In Acts 6:1–6, Luke describes discrimination endemic in the new church that carried over from the majority Jewish culture, as depicted in the neglect of the Hellenized widows in favor of the Hebrews. The Hebrews were “people from Palestine who spoke the local Aramaic,” while the Hellenists were “Jews who were more at home in Hellenistic [Greek] culture and language than in Aramaic, and who therefore were regarded askance by all ‘good Jews.’”7 When the discrimination against those not of the dominant Hebrew group was brought to the church leaders’ attention, they recognized the situation as serious, requiring practical changes in how things were done.

As part of an interracial family, I find this account compelling. It describes the unjust neglect of women of different cultural and ethnic backgrounds. But it also describes church leaders of the majority culture being blind to this discrimination and needing to have it pointed out to them. Their response of appointing Stephen and other Hellenized Jews who could understand the discrimination to oversee a ministry that reached both the dominant and marginalized cultures is helpful and instructive.8

I distinctly remember the day my youngest daughter and I looked at a new school, transitioning from a large public school with a majority-white staff to a small Christian school where the principal was Puerto Rican with an accent. Together they peeked into the third-grade classroom to see her future classmates. In a class of only ten or eleven students, she saw a dark Latina girl, a Japanese-American boy, and a girl of unclear mixed race. Her body physically relaxed. I self-consciously tried to explain the importance of diversity, and the principal stopped me, nodding knowingly. Though the school was tiny with a majority-white student body, the school maintained a remarkably diverse staff, who were attuned to my daughter’s specific needs, making her feel safe and seen.

The Bible is full of sensitivity to the differences of people. It always exhorts God’s people to take the next step in honoring those differences and working toward a more vibrant community that integrates them. My daughters are teenagers now, just beginning to confront what it is to be Asian women in America. We all felt last year’s Atlanta shooting reverberate through our Asian friends and into our own conversations. The fact that a white man could direct his religious frustrations against the lives of Korean women, and whose actions were rationalized by a police officer whose sister was adopted from Asia, invaded the reality of our safe world. We were reminded that I was more like the Hebrew widows—vulnerable, but less so than my girls, who like the Hellenized widows would be facing discrimination at the intersection of their sex and ethnicity. By seeing the world through my daughters’ eyes, including painful experiences, and through intentional learning and listening, I can more fully see why the Bible emphasizes unity in diversity.

This article is from “The Fullness of Galatians 3:28,” the Summer 2022 issue of Mutuality magazine. Read the full issue here.