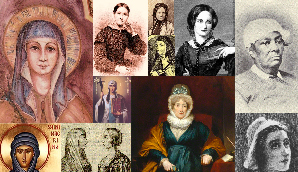 [Editor’s note: This post is one in a series on notable women from church history we’re doing to celebrate Women’s History Month. This week we’re highlighting two women from the high and late middle ages: Clare of Assisi and Isotta Nogarola.]

Saint Clare of Assisi, the eldest child in her family, was a devout woman. She devoted much of her childhood life to prayer and going on pilgrimages to Rome, Santiago de Compostela, and the Holy Land. When she was seventeen, she heard Saint Francis of Assisi speak and shortly after, ran away from home, determined to follow him into a life of poverty and prayer.

Francis took Clare under his wing and placed her in the covenant of Benedictine nuns. Her father made many attempts to take Clare back and order her to marry a man of his choosing. Her father was unsuccessful in getting Clare to return, and during that time Clare’s sister, Agnes, joined her. Clare and the women she led became a new religious order, the Order of Poor Ladies of San Damiano (later called the Order of Saint Clare), and Clare became the first woman to write a monastic rule. In 1216, Clare took over the role of abbess (a covenant superior to nuns) in San Damiano, giving her more authority, which she used to successfully defend her order against outside attempts to impose new, less radical rules. To this day, Clare is remembered alongside Francis as a founder of the Franciscan tradition of radical poverty.

Isotta Nogarola was born into an upper class family during the time of Italy’s Renaissance. Isotta proved herself to be an intelligent student, at a time when men held all political power there was little appetite or room for women in public society.

Rejected and ridiculed in her hometown, she moved to Venice where she gained some notoriety, but ultimately returned home and lived a life of relative isolation. Scorned by leaders of the popular humanist movement, she turned her focus toward God and the Bible, which was thought to be more appropriate for a woman.

She embraced a life of celibacy and continued to study and write on philosophy and religion. She famously dialogued and debated with Venetian politician Ludovico Foscarini over whose sin was greater—Adam’s or Eve’s. Despite rejection at every turn, Nogarola could not be silenced—her writings sparked European debate on the nature of women for years to come.