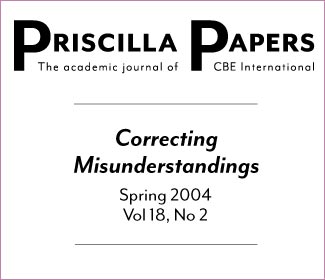 Boundary markers are important to fundamentalists because they need enemies to energize their cause.

In the so-called “conservative resurgence” currently seeking to divide Baptist loyalties, the initial “line in the sand” was the inerrancy slogan, which was dropped when it proved too ambiguous to define and enforce. In its place as a litmus test of loyalty was put the subordination of women, first in the home and then in the church, in the form of a 1998 family amendment and 2000 revision of the Baptist Faith & Message.

Is there scriptural support for such “doctrines,” which have never before been a part of Baptist confessions of faith? Supporters are quick to cite the passages on male headship (1 Cor. 11:3-16) and on the duty of women to be submissively silent in church (1 Cor. 14:34-36; 1 Tim. 2:8-15). But why stop there? In the Old Testament, a woman was ruled over by her husband (Gen 3:16), who could nullify even her religious vows if he disapproved (Num. 30:3-15).

Clearly one finds plenty of biblical passages in support of femail subjection. But the key issue is whether these verses proclaim the deepest insights of scripture on gender relations or merely reflect the cultural practices of the ancient world—such as polygamy as practiced by the patriarchs, which even the inerrantists would not view as authoritative for today.

Before answering that crucial question, it is helpful to look at what the Bible says about slavery, since the same kind of hierarchical thinking applies. Here, as with women, the testimony of scripture seems clear. The godly Abraham held slaves (Gen. 12:5; 14:14; 24:35-36; 26:13-14), a practice later incorporated into Israelite law (Lev. 25:44-46). The apostle Paul counseled the obedience of slaves to their earthly masters (Eph. 6:5-9; Col. 3:22-25), a position he believed consistent with sharing Jesus (1 Tim. 6:1-3). Instructing slaves to remain in their present state unless granted their freedom (1 Cor. 7:20-24), he sent the fugitive slave Onesimus back to his owner Philemon (Philem. 10-20). If anything, the Bible supports slavery more strongly than it does female subordination.

Southern Baptist ancestors 150 years ago used exactly the same literalistic approach to the Bible regarding slavery that today’s fundamentalists use regarding women. In response to northern abolitionists, they insisted to their dying breath that slavery was instituted by God and backed by scripture, and thus anyone who opposed it was an infidel! While they fought and won the biblical battle on their Pauline own terms, they lost the war, which judged them on the wrong side of the greatest moral issue in U.S. history.

The verdict on slavery was finally settled by Sherman and Grant, but the issue regarding women is not yet decided in Baptist life—although the battle for gender equality has been well night won in the United States. Some treat this politial victory in the same way their ancestors treated the abolition ist movement—labeling “women’s lib” a “secular” or liberal” threat to be deplored with disdain. But we don’t have to choose between the hierarchalism of the Bible and the egalitarianism of American democracy. Here are four features of a sound method of biblical interpretation that supports freedom of equality for women as well as for slaves.

First, realize that God always begins with people where they are rather than waiting until conditions improve. In the ancient world of the Bible, this often involved widespread brutality, especially in the treatment of slaves and women. The biblical writers were both honest in describing this situation and courageous in seeking to improve it.

Second, scripture was realistic in recognizing that social change does not occur overnight but may take years or even centuries to accomplish. That is why the Old Testament is full of promises and prophecies that would come to pass only in a new age sometimes viewed as the Messianic era. Only in God’s great plan of redemption would liberty be proclaimed to the marginalized and downtrodden (Isa. 61:1; Luke 4:18).

Third, this long-awaited fulfillment came to a climax in Christ, who thereby became the decisive criterion by which the whole Bible is to be understood. This is why Paul could say that “in Christ” the distinctions between “slave and free” and between “male and female” are now abolished (Gal. 3:28). A new social order of voluntary equality has invaded the old order of enforced hierarchy and coexists within it to express, in advance as it were, the life of the new age already inaugurated but not consummated until we live in the eternal age to come.

Fourth, a Christ-centered method of interpretation always sets the sweep of saving history in the context of creation and consummation. Regarding the former, Genesis teaches that we were all made in the image of God, whether male or female, and thus are destined for dominion rather than for servitude (Gen. 1:26-27). Regarding the latter, the day will come when the whole creation will be set free from every form of bondage and subjection to “obtain the glorious liberty of the children of God” (Rom. 8:20-21).

In the theological jousting that continues to trouble the Baptist family, it is common for those who champion gender equality to be accused of not taking the Bible at face value. The next time somebody tries to test your fidelity to scripture on this issue, turn the tables on them with this simple request: “You tell me why you no longer believe what Baptists previously thought the Bible taught about slavery, and I will tell you why I no longer believe what you think the Bible teaches about women.”

PrevPreviousNo One Ever Told me in Seminary
NextRemembrance: Part 1Next