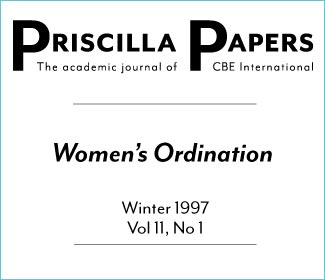 The newly formed Advisory Council on Violence Against Women, co-chaired by Attorney General Janet Reno and Secretary of Health and Human Services, Donna Shalala, is seeking to maximize the impact of the Violence Against Women Act by recruiting the collaboration of national leaders from law enforcement, the media, colleges and universities, sports, health care, primary and secondary education, the corporate workplace and also from religion. On October 11, 1996, leaders from many faiths and religious groups gathered in Washington DC at an interfaith breakfast, with President Clinton as honorary chairperson of the event. The Attorney General gave the key-note address, and leaders of various faith communities were asked to respond briefly. Speaking for evangelicals, Catherine Kroeger made the following remarks:

God said to Cain, “The blood of your brother Abel cries to me from the ground.” What of the blood of thousands of our sisters? Does not that blood too cry out to God and to our consciences?

Although we evangelicals are a diverse group, one of our common distinctives is a commitment to the authority and inspiration of Scripture. We believe that the Hebrew Bible and the New Testament are the inspired Word of God, our only infallible guide in matters of faith and practice. The Bible condemns violence scores of times, as well as stalking, lying in wait, word-twisting, threatening, and other forms of abuse. The Scriptures are quite explicit that the duty of the righteous is to deliver the oppressed from the hand of the violent.

Yet how often we hear of desperate women who go to the church for help, and then are sent home to highly dangerous situations along with the instruction to “Be more submissive and the problem will take care of itself.” This is not the calling of a church or of an individual believer. The Bible says: “Do justice and righteousness, and deliver from the hand of the oppressor the one who has been violated . . . . Is not this to know me?” says the Lord (Jer 22:3, 16).

Sometimes we have endorsed a theology that made our ultimate priority the preservation of a certain power structure within the family—even at the price of human life. Jesus indicated that other priorities were higher (Matt 10:35-37; Luke 12:53) and Jesus once asked: “Is it lawful to do good or to do harm, so save life or to kill?” (Mark 3:4).

Our first obligation to a battered woman is not to offer bad advice but to offer assistance in finding safety for her and her children. This may well include transportation, lodging, and allocation of appropriate resources. Certainly it will include prayer, counseling, and a network of emotional support. She should be allowed, under the guidance of the Holy Spirit, to come to her own decision about how to proceed without being subject to pressure or opprobrium.

The Apostle Paul wrote that the Christian community should take decisive action when a domestic offense becomes known in its midst, and that there is to be zero tolerance for abuse.

And what of the offender, often more persuasive than his victim and all too often a person of influence in the congregation? Such people may be mentored, monitored and ministered to, but must not gain our sympathy or support. They must be made to face the consequences of their own behavior. Twice in the New Testament, batterers are specifically disqualified from church leadership. And the prophet Isaiah declared: “You cannot strike one another with wicked fists and expect your prayers to be heard on high” (Is 58:4).

Some folk have received the mistaken impression that a man has a God-given right to handle in his own way whatever goes on in his own household. Notably, however, our pilgrim forefathers were very stern in their handling of domestic abuse. They viewed abuse as a community concern that must be addressed and firmly corrected. The pilgrims were indeed committed to the precepts of the Scriptures, but they insisted that the Bible must be read in the light of human reason and serious scholarship. We can do no less today.

These Scriptures were written long ago, and they must be studied diligently. We must ask: What does the text say in the original language? What did the text mean to the people to whom it was first directed? And finally, how should it be applied to us in today’s world?

One concept that needs to be addressed is the metaphor of the “head” as it is used in the New Testament, where the wife is bidden to submit to the husband, who is called her “head.” A misconception at this point can readily become a breeding ground for abuse. The ancients made many interesting observations about the significance and function of the head within the body, but the notion of dominance was not among them. More frequently the understanding is one of communication, interconnection and involvement with other parts of the body.

We should next consider the meaning of the Greek word translated as “submit” in passages about women. It most definitely does not indicate that women should become door mats. It can indeed mean to obey or yield to the wishes of another, but it can also mean to adhere to, associate with, identify with, be loyal to, behave responsibly toward someone, or relate in such a way as to make meaning. Such concepts are needed in building healthy, non-violent marriages embodying love, respect and honor.

The Bible reveals women as created in God’s image equally with man, equally gifted and endowed, of equal worth. We must meet the needs of both men and women firmly, creatively and constructively. The Bible was never intended as a weapon of oppression. It is instead an instrument of liberation, reconciliation and healing.