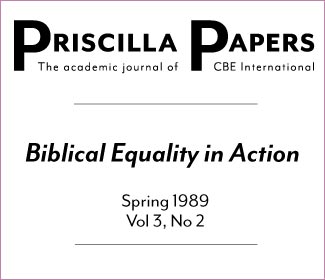 Why We Need Women Evangelists around the World

The call for women missionaries is not often heard today. Often women are left with the feeling “we are only needed because the men fail to go.” Our American culture looks on pioneer missionary work as man’s work because the Church is infiltrated with a worldly and pagan view of women as inferior to men. This view runs contrary to the Gospel of Kingdom of God, and leads women only to go along to support the men. Like pagan cultures, many of our conservative evangelical churches still believe that the public sphere belongs to men, while women’s place is in the home.

What most missionary calls fail to take into account is that in many urban centers of the world, as well as most Muslim and other patriarchal cultures, women and men live in separate worlds. For instance, when my missionary father arrived as a single man in Hequ, China, (where I grew up), he could only invite men to come to the meetings in the Gospel Hall. It was immoral in Old China for him to invite the women! Only when he married my mother two years later and brought her to Hequ, were women invited to the public meetings. They were my mother’s personal guests. Then the green curtain I so well remember was placed down the middle of the aisle, separating the men from the women. Only in this way could both sexes be in one room. However, when it came to smaller informal Bible study groups, the men and women had to have separate studies – with a man leading the men, and a woman leading the women.

While in the West today my husband can be a pastor to both men and women, still in many parts of the world he could only be a pastor to men. This is why single women – or married women with a vision to evangelize women, and not just to support their husbands’ ministry – are so desperately needed in other cultures.

But there is another reason why God has a unique place for women, spelled out in I Cor. 1:26-29; “God chose the weak things of the world to shame the strong.” Socially and economically, women are still the “weaker sex” around the world. They are paid less and have less vocational choices and civil rights than men. But this is precisely why God can use them in world evangelism.

So a strange thing happened both in old China and in patriarchal North Africa. Single women arrived and started working with women. But the women’s husbands who had total responsibility for what their wives were hearing, had the right to come and censor the little women’s Bible study going on in their homes. And so indirectly those husbands heard the Gospel and became Christians. Hudson Taylor recognized this principle when he sent a staff of two-thirds women to evangelize China. In a report in 1888 he reported that many inland stations were “manned” only by women, with the assistance of native workers. I Cor. 1:26-29 was happening, and China was prepared for the persecution of the Mao era by many missions where two-thirds of the force were women.

But there is a third reason why we need women in the world evangelism. As a result of the missionary movement, we have churches planted all over the world. The call for women today is to work with these churches – many of which were started by their sisters in the 100 years before World War II, and now need the help of women to complete the work of world evangelization. In this time of cooperation with emerging churches, women have proved themselves to be less threatening to the national leadership than the “white male.” Women find it easier to adjust to the role of being a helper to the national church, rather than “calling the shots.”

As God continues to turn the tables on our cultural values, what we need in the future is what made the China Inland Mission great. Many, many missionaries must be women!