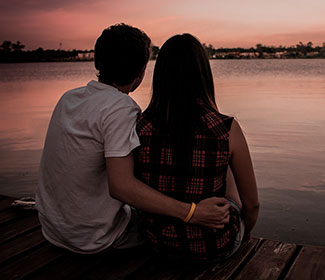 Why Marriage Must Be Egalitarian to Be Truly Christ-like

Earlier this year, Australian ABC News journalist Julia Baird made waves when she published a story on domestic violence in Australian Christianity. Her story, “‘Submit to Your Husbands’: Women Told to Endure Domestic Violence in the Name of God,” cites research showing that Christian Protestant men who sporadically attend church are more likely than men of any other religious group (and more likely than secular men) to assault their wives.

The flipside of this research is that Christian Protestant men who do attend church regularly are the least likely to commit domestic violence. What explains this phenomenon?

Here’s what I believe is happening. There is a view of  “Christian marriage” shared by nominal and committed, church-going Christians alike. Call it what you will— “headship,” “complementarianism,” “patriarchy”—the idea is that God made men to have authority over their wives, and this is the basis of godly marriage.

This view is often used by nominally Christian men to justify abusing their wives. For those men who attend church regularly, patriarchal marriage is moderated by love that springs from knowledge of the gospel and commitment to Jesus. They retain the language of male headship, but because they try to imitate Christ, they don’t really look or act like patriarchs. That’s a step in the right direction, but we can do better.

Many will say the patriarchal structure isn’t the problem, it’s the corruption of those who abuse it. To be sure, there are many who hold a complementarian view and have happy, strong marriages. But is this what the Bible teaches? Is this how God intends marriage to work?

I don’t think so. We are not to apply patriarchy politely. We are to live under a different system, where neither husband nor wife exerts power over the other. Our God was not a “servant leader” but an actual servant. The difference is huge.

Imagine a king who chooses to live among his subjects. He works with them, eats with them, and shares conversation with them. But he can’t be one of them, because he has power they don’t. He can change his life—or theirs—on a whim, and they can’t. He and his subjects can appear the same, but they can’t be the same as long as this power differential exists. The only way he can change this is to give up the crown. That’s what Jesus did. And that is what Paul calls husbands to do in Ephesians 5.

What happens when we make that central to our marriages? We stop making the patriarchy of the ancient world—which the gospel opposes and undermines—essential to Christian living. Marriage becomes not about fitting into impossible-to-define “gender roles” but about unlocking the full human potential of husband and wife according to God’s gifting. We discover relationships built not on power, but on empowering. We get marriages characterized by co-leadership, mutual submission to one another, and joint submission to Christ.

In short, when a marriage relationship looks like the relationship between Christ and the church, the transformative power of the gospel comes to life. Funny, that sounds a lot like what Paul says in Eph 5.

A version of this article appeared as the editorial of the print version of Mutuality as “Trading Power for Oneness.”