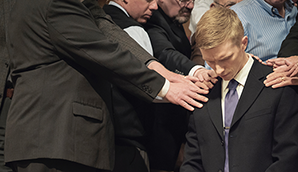 Why John Piper’s Words Should Grieve Men, Too

Last week, theologian John Piper made headlines for saying that women shouldn’t be seminary professors, because seminaries train men to become pastors, and since women shouldn’t preach, they have no place training men for those positions.

I’m not a seminary professor, so I’m not writing this because I’m vying for a job.

I’m not a theologian, so I’m not going to break down the Greek words and the context to show you why he’s wrong (though plenty of other theologians have done so.)

I’m just a small woman with a big voice in my soul that doesn’t come from me.

When I read Piper’s comments, I was a little angry and a lot sad.

I was sad for sisters like me with big voices in their soul they know they’re meant to share, who get shut up and shut out on the regular. Women who have to write and travel and speak and try twice as hard as men to live out their calling to share their voice with the world.

But I wasn’t only sad for women.

I was really, really grieved for men. Because while I only have three biological brothers, I have millions of spiritual brothers around the world who I love and care for and—this week—ache for.

Because here’s the thing.

The creation story in Genesis says that in order to reflect God’s image in the world, God created men and women. So, just like Mao Zedong’s insistence that “Women hold up half the sky,” there should be a similar statement in the Christian tradition that says, “Women hold half the voice of God.” There should be a similar insistence that we not only hear about God from women, but that we in fact hear God’s voice through women.

Because breath is breath, air is air, but it sounds different flowing through a flute than it does a bassoon.

Insisting, in spite of more accurate (and generous) interpretations of Scripture that men be the only voices heard from the pulpits of our churches, is like an orchestra that only has cellos and bassoons. It’s heavy. It’s masculine. It’s only half the story. It’s only half the notes.

There’s a common misconception that anyone who advocates for the equal rights of women is somehow disparaging or displacing men.

That anger is the motivating force.

That selfishness is at the heart of it.

But that’s an easy, fragile, straw man argument that God—who is equally male and female—disassembles with a breath. A soft, gentle, let’s-be-honest-now breath.

It’s not to say we need to unseat the already-seated orchestra.

It’s just that the orchestra we have is incomplete. There are notes missing that we don’t even know are missing because we haven’t ever heard them.

In the church, this is not only unfortunate, it’s absolutely tragic. Not only for the women whose voices are silenced, but for all of us—men and women alike—who are deprived of hearing the equally masculine/feminine voice of the God who loves us all.

So let’s seat the rest of the orchestra. Let’s let the breath of Love flow through flutes and bassoons. Through violins and cellos.

Until we do, half the notes are missing.

Half the seats are empty.

Half the sky is falling.