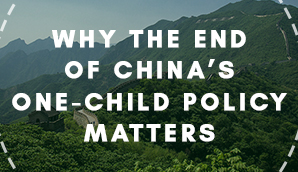 My husband and I were sitting in a restaurant waiting for our food. A young couple sat down at the table just in front of us.

“So,” my husband began, “I know you told me not to tell you about all the news stories I’ve read today, but I read something interesting you need to know about.”

The waiter arrived and placed our food on the table, but I could barely see my meal. I was dumbstruck by the news my husband had shared. I thought back to the years of prayers on the issue of gendercide in China. I recalled the group of women who gathered on International Women’s Day last year to discuss the plight of Chinese women and girls.

Thirty-seven million girls have been lost, routinely aborted or given up, only because they were girls. Gendercide—the very evil God commanded me to pray to end and now, my prayer might be realized with the end of the one-child policy.

Between bites of my food, I cried, right there in the restaurant.

God has done amazing things in my life, big things, but this answered prayer was bigger than I could ever have imagined.

The couple seated in front of us were joined by another couple carrying a little boy in a blue onesie.

A few minutes after their arrival, the couple with the baby jumped up and shouted “congratulations!” Hugs went around the table. The first couple had just shared the news that they were pregnant and expecting their first child.

I grabbed my cell phone and started reading the news. I quickly discovered that the change to the one-child policy would not be implemented until March, 2016.

The one-child policy was instituted in China in the late 70’s to curb a rapidly expanding population, designed to function as a temporary form of birth control. However, it soon became apparent that the government had no intention of ending it. Instead, the one-child policy would last for thirty-five years.

The patriarchal idea that women have less value than men is deeply-rooted in China, as in much of the world. Chinese culture emphasizes the importance of bearing sons. The one-child policy exasperated this cultural ideal, and countless girls were aborted to allow parents to try again for a boy.

During a forum on the one-child policy, a Chinese man remarked that it was not only the policy that caused the death of millions, it was the parents as well.

Thanks to the one child policy, it is estimated that close to thirty million Chinese men will be without female companions by the year 2020. As a result, China is struggling to address human trafficking, prostitution, kidnapping and forced marriage, and other forms of female exploitation.

Five hundred women commit suicide every day in China, the only nation in the world where more women kill themselves than men. Seventy thousand Chinese children are trafficked each year.[1]

Though the one-child policy will soon be officially over, China faces a new challenge. It will be a daunting task to undo the cultural mores that place men above women and deprioritize women’s lives, health, and education. China must undo thirty years of cultural gender discrimination under the one-child policy and deal with the patriarchal beliefs that led to gendercide.

As I contemplated this new global challenge, I heard the other man at the table in front of us ask the couple:

“So, you don’t know what you are having yet? What are you hoping for? No wait, don’t tell me. You want a boy, of course you do. Boys are the best!”

My mouth hung open. Just as we celebrated a global victory against patriarchy, I was met with a new battle in my own backyard. From China to South Africa, to the US, and everywhere in between, patriarchy has roots. We are called to fight it on every front.

The idea that men matter more than women is a gross denial of the truth of Christ. Jesus valued women enough to lay down his perfect life for them. I believe that our world should more closely reflect a God who so clearly loves and values women.

China’s one child policy is ready to be buried, and with its death, our mission has new life. I am encouraged to keep praying and speaking the truth of God to power beside my brothers and sisters around the world.

May we shout for joy when we hear of your victory and raise a victory banner in the name of our God. May the LORD answer all your prayers!

PrevPreviousEgalitarianism Is For Men, Too
NextOur Bodies Were Not Made for SexNext