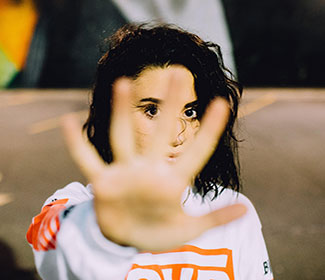 When Women Say “No” But Men Don’t Like It

You’ve probably heard about the tragic murder of Iowan Mollie Tibbetts by now. Tibbetts was reportedly killed by a man because she rejected his advances and he was angered by her refusal.

Being a woman in public is an uncomfortable and often dangerous assignment. I’d wager that most women know the perils of rejecting a man’s advances by the time they’re sixteen. We learn that it can be risky to say “no” to men. Not because all men respond badly, but because some men do.

Recently, I took a walk on my lunchbreak. I didn’t make it two blocks before a man physically blocked my path, told me I was pretty, and asked if I had a boyfriend. I continued on, and another group of men cat-called me, shouting lewd commentary on my body. A few stood up, pretended to follow me, and laughed as I sped away.

On another lunchtime walk a couple months later, a man exited a home as I walked. He trailed me—no more than five feet behind—back to the door of the office building where I work. I rushed to and from my car the rest of the week, and I also changed my walking route to avoid his neighborhood.

Last summer, I went tubing with friends on the lazy Apple River. As we exited the water, a young man ran up, kissed me, and shouted: “I’ll never see you again!” Hands full with an inflatable tube, I couldn’t stop him. In half a second, he was gone—off to float down the river, off to float through his life.

These are just a recent few of many uncomfortable interactions with men in my lifetime. I don’t share these because I think all men are capable of such disrespect. I’ve known thousands of men who live with integrity, who respect women’s agency, and who always receive women’s “no” as firm and final. But I also have many more stories like the three I shared. Most of the women I know have similar uncomfortable accounts.

Because Mollie Tibbetts said “no” and now she’s dead. Because Parisian Marie Laguerre said “no” to a cat-caller and was slapped in the face. Because Ariana Grande sang a beautiful tribute to Aretha Franklin and was groped on live television by a pastor.

Some men feel they are owed something by this world. A “yes.” A hug. Our time. Our phone numbers. A night of pleasure. Some men feel they have the right to punish women when they don’t get what they want. And yes, some of those men sit in pews on Sundays.

I was a first-timer at Bible camp when a man first crossed a line with me. I was kissed on a Christian college campus without my consent. As a young girl in a Christian elementary school, I was taught that I needed to cover up, that it was my fault if boys—or grown men—liked my body. As a college student at a Christian university, my teacher asked male (and presumably Christian) students to list all the derogatory names for women they could think of. The list stretched long and “whore” was perhaps the least offensive term on it.

My stories are but pinpricks, minor blips on my life’s radar. I don’t say that to minimize what I’ve faced, or the trauma of anyone who has similar stories. Your pain is your pain and only you can measure it. But I have never been violently assaulted. I have never been sexually abused.

But I have been disrespected by men. I have experienced unwanted touch and attention. I have heard messages and theology that encouraged me to overlook these experiences or blame myself.

No, it’s not okay. But thankfully, I’m okay.

There are many women who are not okay right now—women who are hunched by the weight of pain, fear, and trauma. God help us all if they reach out a trembling hand and there’s nothing for them to grip in the church.

If but one woman is harassed or mistreated in the entire body of Christ—either inside or outside our sanctuaries—it’s the concern of the church. Leather Bibles won’t protect our daughters from abuse. Cross necklaces won’t guard them against cat-callers. And if abusive, control-hungry men don’t like women’s “no” in the world, then why would they like it any better in the church?

We’ve seen shocking sexual abuse uncovered in the Catholic Church. We’ve also heard thousands of stories of abuse in Protestant churches since the birth of the #MeToo movement. Just last weekend, the world watched as a pastor repeatedly touched Ariana Grande’s breasts on live television, during a funeral. And still, some Christians were more concerned with the length of her dress than the violation of her body by a man who claims to represent God.

Some of the abuse has been blatant and some has been more subtle. Sometimes, a man simply refuses to hear and accept a woman’s clear “no” and sometimes, it’s more subtle line-crossing. We sometimes have an unhelpful tendency to cry “not us!” when women say “yes, you.” No, we’re not the only community dealing with these issues. They’re pervasive across the globe.

But yes, us. Yes, our churches. Yes, our pastors. Yes, our theology. Every second wasted with apathy and excuse is an offense to the sacred dignity of women, a crime against we who hold up half the sky.

Still, my message to the church isn’t one of hopelessness. We should only feel hopeless if we decide to ignore the problem instead of dealing with it head on by talking about “no” in the church.

There are brighter roads ahead if we are brave enough to take them together. And if the church leads the way on these tough topics, I believe the world will follow.