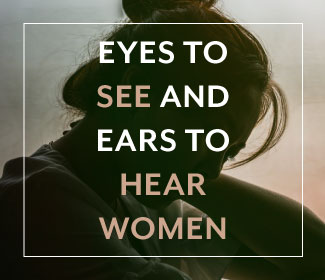 This article originally appeared on EthicsDaily.com and was reprinted in Eyes to See and Ears to Hear Women (Minneapolis: CBE International, 2018). Used by permission.

I was one of the many Christians believing God created women for a subservient role to men.

Growing up in fundamentalist Baptist churches, it was instilled in me for more than two decades that God created women to “help” men; women were to serve their husbands and children.

This was the divine construct of God’s orderly creation, supposedly a successful formula for a righteous life and happy home.

Little did I know how wrong the church was on this point, leading to what we now know as a theological culpability for sexual abuse.

Men that believe they possess a divine right to “rule” over their wives are susceptible to the “David Complex,” which stems from the Old Testament narrative when King David was so overcome by his sexual desire that he forced Bathsheba to bed (2 Samuel 11).

Let’s be clear: This was an abuse of power.

Bathsheba could not resist the king. If she did, Bathsheba might have faced a possible execution for treason.

In addition, David attempted to cover up his sin by having Bathsheba’s husband killed in battle. The king would have gotten away with this treachery if it were not for the boldness of a prophet condemning his actions (2 Samuel 12).

The “David Complex” is not exclusive to the Old Testament. In the New Testament story of John 8, readers find Jesus condemning a male-dominionist system that believed and treated women as objects to be used and discarded.

A woman was set up to be abused by the religious male leaders of the day, just for the sake of disqualifying Jesus as a prophet.

The religious leaders only brought the woman—not the man—“caught” in adultery to him. After analyzing the situation, Jesus uttered these haunting words, “Let anyone among you who is without sin be the first to throw a stone at her.”

The precision of Jesus’ words is crystal-clear in the context of the story. Jesus is condemning a theology that perpetuates a patriarchal rule that leads to sexual abuse.

In other words, the sin of the religious leaders was as great as—if not worse than—the one they were condemning.

These biblical stories bring us to this extraordinary moment in time.

Over the last few months, we have witnessed one story after another where powerful men exert their authority and influence to engage in sexually abusive behaviors toward women.

While these situations are not exclusive to Christians, an argument can be made that the church has a theological culpability in these matters.

When the church teaches young girls to be subservient, the church fosters the idea that women are less important than men.

When the church argues for complementarianism (men and women have specific roles that “complement” each other), this empowers men to believe they have a distorted right to treat women in a lesser role.

When the church denies women the same rights as men when it comes to marriage, parenting, home and the church, then the church is giving society permission to treat women as a sub-class of humanity.

These church teachings are wrong and must be called out. They have contributed in creating the environment in which sexual abuse prevails under the cover of a culturally perverse mindset empowered by theological malpractice.

However, calling these ideas and behaviors immoral and wrong is not enough. As followers of Jesus, we must follow his lead in attempting a course correction when we are theologically adrift.

The church must speak out as the Old Testament prophet did when he boldly condemned King David. The church must take seriously the teachings of Jesus by pointing out systems, both secular and religious, that propagate attitudes and perspectives in which women are viewed and treated as servile objects.

The church needs to fervently promote an egalitarian theology that empowers women to fulfill their divine callings.

Equality will never be achieved as long as the church continues to turn the other way.

We must strive to do better for the young women growing up in our churches, for God’s mercy may be withheld if they grow up in a church that remains silent while predators are lurking in the shadows—or in plain sight.

PrevPreviousComplementarianism: A Separate-But-Equal Knockoff
NextWomen Builders of the Church: How Women Served Christ from the Early Church to the Modern Era (Finnish, English)Next