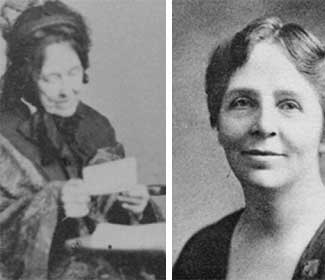 A Tale of Two Translators: The Lives and Legacies of Julia E. Smith and Helen Barrett Montgomery

Who translated the version of the English Bible that you use? Google the answer, and there’s a strong likelihood you’ll find that all or most of the translators were men, even of very recent translations. Remarkably, two translations from the mid-nineteenth and early twentieth centuries were the solo efforts of women scholars.

Let me introduce you to Julia Evelina Smith (1792–1886) and Helen Barrett Montgomery (1861–1934). Smith was the first woman to translate the entire Bible into English unaided—in fact, she is still the only woman to have ever done so. While Smith’s translation was self-published, Helen Barrett Montgomery would be the first woman to have her translation of the Greek New Testament professionally published.

Smith and Montgomery had the advantage of being born to families in comfortable financial circumstances, and they had parents who valued education for their daughters. Both women benefitted from the burgeoning educational opportunities for women.

In Smith’s time, it was highly unusual for women to study Latin and Greek, but she obtained permission to study Latin (and probably also Greek) with a tutor during her secondary school years. The derision of her male fellow language students about a mere girl studying Latin only spurred her on to work all the harder. Later in life, she would teach herself Hebrew. However, despite Smith’s undoubted academic skills, girls did not have access to a university education in her youth—and it would be 1876 before an American woman would attain a bachelor of divinity.

Together with her family, Smith was involved in activism for worthy social causes, such as abolition and women’s suffrage. However, despite a brief stint teaching in a girls’ school, most of her life centered on the domestic sphere—her parents, sisters, and the family farm. Smith was the only one of her sisters to marry, tying the knot with Amos Parker when she was eighty-seven!

Born in a later generation, Montgomery was able to access new educational opportunities for women. She was one of the first students to complete a teaching degree at the all-female Wellesley College, where she was at the top of her class in Greek studies. She would later be awarded an honorary master of arts and three honorary doctorates.

Montgomery was not content to enjoy the social life of the wife of a wealthy businessman, but employed her considerable gifts in activities ranging from establishing a union to protect the rights of women workers, to writing several books on missions and advancing the cause of mission boards, to sitting on the Rochester (New York) School Board—being elected to that position long before women themselves could vote. Despite her heavy schedule of public duties and book writing, Montgomery remained active in Bible teaching at her local church. For forty-four years, she organized and taught a Bible class for women at Lake Avenue Baptist Church in New York, which also licensed her to preach in 1892.

Recognition of her spirituality and leadership came with her 1921 election as the first ever woman president of the Northern Baptist Convention (now American Baptist Churches USA), or of any American denomination. This was a precarious time in which strong and wise governance was needed to navigate the church through the conflict caused by the rise of fundamentalism. Montgomery steered the denomination through this challenging period with a balance of her own firm convictions and skillful negotiation between strongly opposed parties.

Baptist preacher William Miller had concluded, without a shadow of a doubt (in his mind and those of his followers), that the Bible indicated the world would end on October 22, 1844. When October 23 dawned, Smith was among those whose faith was shaken by the failure of Miller’s interpretation. How could Miller and all who believed him have been so very wrong about Scripture?

The solution, Smith concluded, was to return to the original languages and to more accurately “see the connection from Genesis to Revelation.” 1 Her four sisters and another friend were “anxious to know the literal meaning of every word God had spoken,” 2 so in 1847, Smith began translating the Bible for them, meeting weekly to discuss the progress. By 1855, she had translated the Bible twice each from Greek and Hebrew and once from Latin.

The aim of Smith’s translation was to develop the most literal version possible, in order to arrive at the correct meaning of those texts. Although she was in many respects a gifted linguist, she did not have a concept of translation theory or of interpretation (hermeneutics) to enable her to see the flaws in her woodenly literalist approach. As she had not studied at university, she did not perceive some of the errors in her understanding of Greek and Hebrew.

Smith did not believe that commentaries, or other specialist knowledge beyond the understanding of the words on the page, were needed for translation, nor did she feel the need to consult with biblical scholars for review. In the introduction to her Bible, she wrote, “It may be thought by the public in general, that I have great confidence in myself, in not conferring with the learned in so great a work, but as there is but one book in the Hebrew tongue, and I have defined it word for word, I do not see how anybody can know more about it than I do.” 3 This towering belief in her own abilities enabled her to achieve much in some areas, but it unfortunately made her a poorer scholar than her natural ability suggested. Nevertheless, it was a remarkable achievement.

Her translation might have been lost to history if it had not been for a ruthless tax collector who raised the tax rates for properties owned by women in Smith’s home town of Glastonbury, Connecticut, but left tax rates the same for male-owned properties. Thus began a battle of wills in which Smith and her sole surviving sister, Abby, fought in the law courts and the court of public opinion for “no taxation [of women]without representation” a century after revolutionaries hurled tea chests into Boston Harbor.4 The sisters’ fight drew nation-wide attention to the issue of women’s suffrage.

Hoping to demonstrate that women should have the vote because they were not intellectually inferior to men, Smith decided to publish her Bible translation more than two decades after she completed it. She selected a publishing house where the typesetting, operation of the printing press and editing were done by women. This Bible publication was an undeniably feminist act.

While Smith’s translation had arisen from her desire to understand the Bible better for herself and her inner circle, Montgomery’s was instigated by evangelistic concerns. As a young woman, prior to attending college, she had taught a Sunday School class for “a few rough street boys, [helping] them to know of the love which enfolds all loves in its bosom.” 5 She loved her pupils and inspired them to deeper faith, but struggled with the problem of how to help them to read the Bible in the language of the King James Version—a barrier for the young and less educated.

The passage of time did not dull her concern for this obstacle to evangelism. After returning in mid-1914 from an extensive world tour of the foreign mission field, she began translating the Greek New Testament into English, a task begun over three decades after she had taught the boys’ Sunday School class, and which would take nine years to complete. Her goal was to make Scripture more accessible for the young, foreigners, and busy Sunday School teachers.

Ironically, her first foray into Greek studies at Wellesley was an unhappy one. She hated the subject and wanted to drop it, but then decided to persevere. As her competence in Greek grew, she found that it helped her to find “a more intimate approach to the Savior of mankind.” 6 Her New Testament translation many years later demonstrated such excellence and accuracy that noted Koine Greek scholar A.T. Robertson remarked, “It remained for a woman to translate the Greek tenses correctly.”7

In translating the New Testament passages about women, Montgomery had access to resources which were not available in Smith’s time. In particular, it seems certain she was influenced by Katharine Bushnell’s ground-breaking work, God’s Word to Women. Her translation choices regarding women were bolder than many recent Bibles, and reflected her conviction that Christianity was truly a faith of freedom and equality for women. She declared to the Baptist World Congress in 1923 that,

Jesus Christ is the great Emancipator of woman. He alone among the founders of the great religions of the world looked upon men and women with level eyes, seeing not their differences, but their oneness, their humanity. 8

Montgomery combined scholarship with a concern for readability that extended beyond just her choice of wording. She pioneered the use of subject headings, moved verse numbers to the margins, and separated the text into paragraphs (traditionally, each new verse started at the left margin). Two of these three innovations are now standard in English Bibles. She used footnotes to give details on historical background, Old Testament quotations, vocabulary studies, and other helpful information, making her version an early example of a study Bible.

The new translation rolled off the presses of the American Baptist Publication Society in 1924, the publisher’s 100th year. It was therefore called the Centenary Translation, but is also known as the Montgomery New Testament and the New Testament in Modern English. Montgomery and her husband lived below their means so they could devote much of their income to the Lord’s work, so it was typical of their philanthropic commitment that Montgomery chose not to profit from the sales herself, but directed the funds back into North American Baptist missions.

A Place in Translation History

As the first Bible translation by a woman and due to its connection to the history of women’s suffrage in the US, Smith’s translation has attracted some recent interest from scholars. But as a Bible choice for the everyday reader, the peculiarities of its translation style and various inaccuracies render it a mere historical curiosity.

In contrast to the personal interests which inspired Smith’s translation, Montgomery’s was a New Testament translation made with the reader in view. Unlike Smith’s, it used the latest scholarship of the time and a deeper understanding of Greek, combined with a desire to accurately communicate meaning (rather than just transposing words). It remains a readable translation for today. Innovations in the formatting which Montgomery pioneered have had a lasting impact on how our Bibles look. Although her New Testament has been much neglected by scholars, Montgomery’s interpretation of the biblical passages about women, which were on the cutting edge for their time, should earn it a place in the history of egalitarian theology.