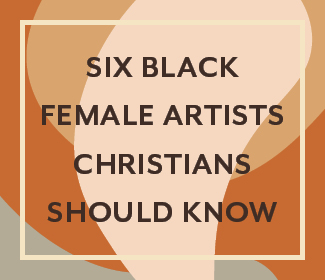 For too long, Black women’s contributions in art have been overlooked and unacknowledged. Art has always functioned as an important avenue for those who wish to express their inspired ideas with visual impact. For Black Christian female artists, their talents and voices have historically been suppressed as dominant cultural voices gained more recognition. Fortunately, it doesn’t take much digging to uncover a variety of visual artistic contributions by Black Christian women in the United States.

The six women featured below have used art as a medium to express their faith, to call attention to injustice, and to recognize and preserve their heritage. Their work is a treasured piece of American history, evoking important voices rooted in Black women’s experiences. Although many Black female artists remain unknown, we have the opportunity to celebrate the stories and talents of those we do know. These women’s contributions to the field of art and their impact on US history deserve our attention and recognition today. 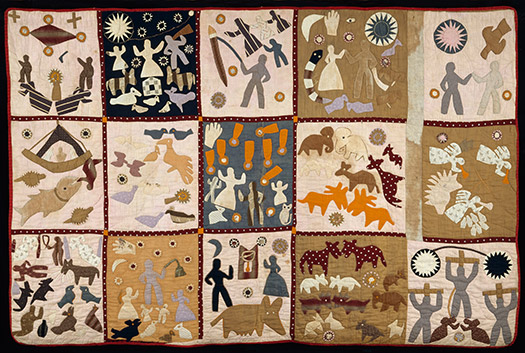 Powers was born a slave in Georgia and later gaining her freedom, she created a series of quilts in the late 1800s which reflected her particular interest in biblical heroes who overcame great obstacles, such as Noah, Moses, Jonah, and Job. This appliqué textile design technique was imported from West Africa as a storytelling device and was an important medium for narrative storytelling among African Americans. In Pictorial Quilt (Fig. 1, above), Powers used cut and sewn-on fabric shapes created from dyed fabric to illustrate biblical scenes intermixed with traditional folklore legends. Powers was rediscovered in the 1970s, and her work can now be found hanging in the Smithsonian and in the Museum of Fine Arts in Boston.

By the late nineteenth century, religious art was in great demand, and patrons of the arts regularly commissioned pieces that captured beloved Bible stories and heroes. Art historians have concluded that over 40 percent of art created in America in the nineteenth century was thematically religious. It was around this same time that Black artists began to gain professional recognition. To escape the racism that prevented acceptance by the American art community, Black artists had to move abroad to Europe, which was the epicenter of professional artists at the time, to study and gain the skills needed to make a living.

Edmonia Lewis was one of these artists. Lewis is the only Black woman to be widely accepted as a professional American artist in the nineteenth century, and she spent most of her career living in Rome, Italy. Lewis’s story is remarkable for the unmatched obstacles she faced due to prejudice against her gender, race, and poverty. Lewis overcame all odds, studying and creating many marble sculptures in the neoclassical style. While living in Rome, she felt drawn to the story of Mary, the mother of Christ, and converted to Roman Catholicism. After her conversion, Lewis was quoted as saying, “I have a strong sympathy for all women who have struggled and suffered. For this reason, the Virgin Mary is very dear to me.”

Lewis is also well known for her fascination with the biblical heroine Hagar, and she worked for years to create a sculpture of Hagar that pleased her. Lewis identified with Hagar as a woman who had been used, abused, and cast out from all society, and like many African American women, she saw Hagar’s Egyptian heritage as representative of Black people. Although Lewis created many sculptures, her Hagar statue is the only religiously themed piece of her art that remains. This life-sized Hagar statue, exhibiting elaborate drapery and a poised posture representative of the neoclassical style (Fig. 2, above), represents the moment when God asked Hagar, “What aileth thee, Hagar?” (Gen. 21:17, KJV). Although not given the recognition she deserved at the time, Lewis was rediscovered as a professional artist in the 1960s, one hundred years after her career ended. 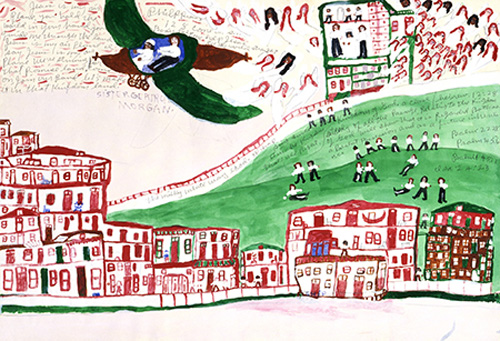 Many Black folk artists emerged in the 1900s, including Minnie Evans and Gertrude Morgan. These artists, although formally untrained, created art to communicate their faith and emphasize their personal encounters with the divine. Many of these artists’ works are now displayed in prominent museums throughout the US.

Sister Gertrude Morgan answered her spiritual calling as a street preacher and gospel singer. Later she started painting because she believed God called her to spread the gospel message through her artwork. The majority of her paintings revolve around Revelation 21, and her work was regularly inspired by her personal visions and conversations with God. In her painting, Jesus is my air Plane (Fig. 3, above), Morgan illustrates a vision of her and God flying together over the New Jerusalem in a sky full of angels. 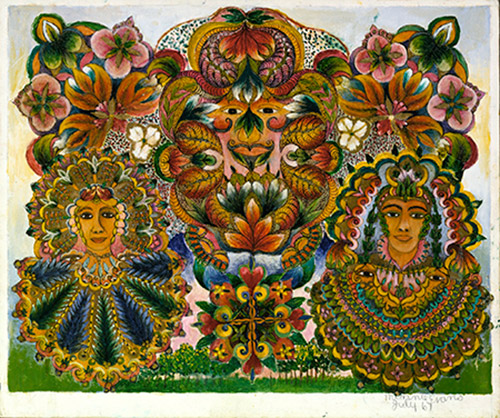 Minnie Evans grew up in North Carolina and worked as a gatekeeper of the public Airlie-on-the-Sound gardens. Evans was fascinated by the book of Revelation and created many paintings in the 1960s and 1970s that combined her interest in the garden’s beauty with her visions of the Garden of Eden restored in the New Jerusalem. In particular, she was inspired by the feminine divine and felt compelled to paint visions she received directly from God. She is known for combining goddess-like faces and figures with floral motifs and patterns in her brightly colored art. She has been quoted as saying, “Something has my hand,” about the process of creating her art, attributing her talent, ideas, and inspiration to the Holy Spirit’s guidance.

By the beginning of the twenty-first century, popular African American religious art experienced a shift in focus and began emphasizing political activism over direct communication about religion. Although the themes of oppression and redemption have always been present, overtly religious themes became significantly less common. Art that highlighted the evils of oppression and wrestled with issues of continued injustice experienced by Black Americans gained greater importance.

Kara Walker’s artwork deals with issues of oppression, racism, gender, sexuality, and the impact slavery has had on the Black American experience of faith in her work. In her ink piece entitled Christ’s Entry into Journalism (click to see this piece), Walker employs a play on words and merges together images of Jesus’s entry into Jerusalem with American historical figures such as Frederick Douglass, Martin Luther King Jr, riot police, Ku Klux Klan members, a lynching flanked by trapeze artists, and several other seemingly irreverent characters. Walker’s complex, nonlinear image merges together various influences and moments in history that have played a part in the Black Christian American experience and calls attention to the continuous struggle of racism in America. 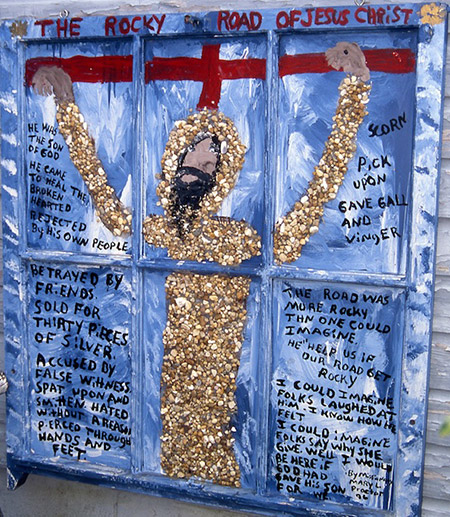 In a vibrant and unique style, Mary Proctor picks up on the long tradition of folk art to tell stories from her own experience as a Black woman in America. She often employs Christian themes in her art, refers to herself as “Missionary Mary,” and is a self-taught visionary who is inspired by God to create and promote the truth. She reports hearing directly from God to begin painting when God told her “the door is the way,” and she started by painting an old door she found in her yard.

Proctor’s work can be found all around the country in many galleries and several museums. Proctor’s conviction that God inspired and asked her to continue to paint the truth of her experience has led her to continuously seek him, and she feels her mission is to get into the hearts and the minds of the American people.

By taking a quick look back at the contributions of these artists, we are able to gain a greater appreciation of the unique voices being expressed, how they call our attention to injustice, current and historical, and their invitation for us to engage in the tension of their realities, embracing faith while living through oppression. These female artists invite us to see the truth of their experiences through their artistic talents inspired by God. By recognizing and appreciating these women’s contributions to the field of art and to US history, we can further understand how to become informed allies that can promote more voices and stories of Black women through the unique lens and power of art.
“Jesus is my air Plane,” by Sister Gertrude Morgan and “Design Made at Airlie Gardens,” by Minnie Evans, courtesy of the Smithsonian American Art Museum, accessed at americanart.si.edu.

This article appears in “Womanist Theology: Unraveling the Double Bind of Racism and Sexism,” the Fall 2020 issue of Mutuality magazine. Read the full issue here.

PrevPreviousAlways Say Her Name
NextComplicity and Silence: How Lament Could Lead Us Toward a Better PlaceNext