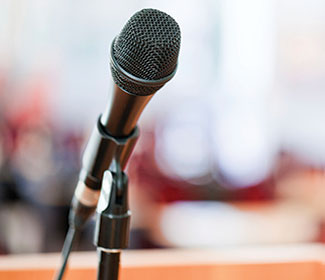 When two of Jesus’ disciples suggested they should be given places of honor with him,  Jesus presented a different model for living. It is one of servanthood and submission to God. Not of seeking after positions of power, not exercising authority, but of becoming a slave for the gospel.

Such teaching should lead to a church that operates differently than the world—a church that doesn’t elevate leaders above others or fawn over celebrities. However, that is not the reality. Preachers, CEOs of Christian organizations, Christian celebrities, and musicians receive excessive adoration, large financial rewards, and even larger Twitter followings. Rather than a counter-culture of servanthood, what we see in the church mirrors secular society’s worship of power and fame.

Instead, the church needs to dismantle these power structures. We need to create spaces where the last really do come first, where humility is valued more than the charismatic gifting of a speaker, and where every member of the body is valued and compensated fairly for their contributions. Such work is for this generation and many to come. It will be accomplished this side of eternity or the next; for surely when the kingdom comes in all fullness, power will be distributed as Jesus taught it should be.

If we are to realize Jesus’ prophetic vision of leadership, a root issue must be resolved: the unjust valuing of some humans above others. Across every society in the world, one group holds the vast majority of power. Ninety-one percent of Forbes’s 2014 list of the world’s most powerful people are from this group. The majority of CEOs, presidents, monarchs, billionaires, entrepreneurs, philosophers, scientists, media moguls, journalists, culture makers, and sports personalities are people from within this group. Within the church, this group dominates platforms, pastoral teams, and mission boards. This group dominates decision-making in the majority of Christian homes, as well. This group is men.

Men make up just less than half of the world’s population, but they hold the majority of power in almost every community. This is not an accident. Genesis 3:16 makes clear that male domination was a primary consequence of the fall. Patriarchy is almost as old as sin itself.

Yet Jesus overturned the curse of sin and death and, along with it, our bondage to patriarchy.

Still, across our community of faith, women and girls are disadvantaged because they are born female. Implicit modeling and explicit teachings on headship, submission, sex, gender roles, forgiveness, and leadership leave girls and women convinced of their inadequacy. In wider society, girls are sexualized and objectified, often in the name of “sexual liberation.” Meanwhile, within the church, they are objectified and sexualized in the name of modesty and purity. Women’s voices are too often absent from boardrooms, pulpits, and conference stages, even egalitarian ones.

Late in 2013, I worked with a small group of women to gather and analyze statistics regarding the number of men and women on the national Christian platform in the UK, where I live. We found that twenty-eight percent of speakers at national Christian events were women, even though up to sixty-five percent of the UK church is women. This study led us to found Project 3:28, devoted to creating gender balance at Christian events.

When we surveyed leaders about these statistics, responses ranged from “we just want the best speakers, gender has nothing to do with it” to “this is not a surprise to me at all.” For some conferences, the absence of women was a matter of theological conviction, but the majority of events held to an egalitarian view of Scripture and wouldn’t be against female speakers, at least in theory.

Our study was imperfect, but it provides a valuable snapshot into what is happening in the UK, and it created a conversation across the country about the distribution of power in the church and about why such inequality exists. If only it were true that lack of women on the platform was solely about competence! The reality is much more complex and multifaceted than men being better at public speaking or of a deeply held theology of gender essentialism.

There is an almost endless list of obstacles that prevents women from contributing on the national Christian platform. Just a few are a lack of childcare support, financial issues, societal beauty standards that undermine women’s confidence, not being able to get off the snack rotation, unofficial meetings that happen in male-only spaces (beside the urinal, for instance), and an inability to network due to the fact that many male leaders are discouraged from spending time alone with women, for fear of sexual indiscretion.

But why this is important? Why does it matter who delivers the message, so long as it is the right message? Questions may be raised about whether women should be seeking after a public platform. If our understanding of Christian faith is of servanthood, surely public speaking should not be the main goal?

Making room for women on stage at Christian events, behind the pulpit, and in the Christian media is not about being politically correct, but about ensuring that the fullness of God’s creation is given the opportunity to live out God’s call and purpose. God made humanity male and female, and it was “very good.” Together we represent the best of God’s creation. Scripture is littered with feminine imagery of the divine, of mother bears and hens gathering chicks, of women with lost coins, and of breastfeeding, weaning, and birth. The church cannot afford to exclude the voices and experience of women. Until those whom God chose and uniquely purposed to birth the nations have full access to their calling and full use of their gifts, we will not see the kingdom realized.

We have a long way to go until the body of Christ is represented by the fullness of humanity, both publically and privately. We need to create a culture where power is used wisely and well, and where women and men work together to overcome the stronghold that is patriarchy. Each of us has a part to play in ensuring that women’s voices are heard. Here are some actions we can take:

1.  Pray. As Paul explains in Ephesians, there is a spiritual battle, and we are called to put on the full armor of God and fight with God’s Word. We must pray without ceasing for an end to patriarchal strongholds.

2.  Study. Christians for Biblical Equality and others are regularly producing great resources which empower us to know the biblical truth of gender justice. The more we learn, the more able we are to challenge people who argue that patriarchy is of God.

3.  Champion. We must champion gifted women within our communities. There are countless barriers to women fulfilling their calling. Championing women is about ensuring that women are emotionally and practically enabled to fulfill their calling.

1.  Own your privilege. Men will find it easier to gain positions of power and are less likely to suffer abuse or violence against them. It is important that men take time to own and deal with the privilege and the benefits afforded to them by virtue of being born male.

2.  Make space. Women can only be given opportunities if there is space for them. If you are asked to speak at event, check whether they have women on the program, and if not, suggest a female colleague who could take your place. You could even publically pledge to not speak on male-only panels or programs.

1.  Celebrate. Women often have access to a limited amount of power. This can lead to a competitive rather than collaborative environment for women who are called to lead. We can reject that and instead celebrate and empower other women and girls, ensuring that we lift others up as we climb through the power structures.

2.  Say yes. Women often suffer from low confidence as well as or in addition to Imposter Syndrome (unwarranted feelings of inadequacy or incompetence. This often takes the form of feeling like a fake, attributing success to luck, or downplaying success). We often find ourselves saying no to opportunities or not applying for jobs or opportunities that we feel out of our depth in. Men rarely have the same issues with this. Why not take a pledge to say yes to whatever opportunities come your way, and then work out the practicalities as you go along. If God opens a door, then provision will
appear also!

Together, we can overcome patriarchy. When we make space for women’s voices alongside men, we take a crucial step toward Jesus’ model for living.