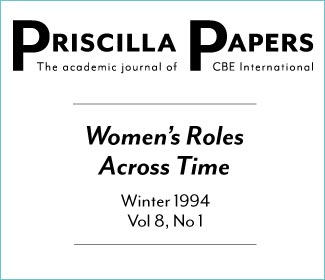 The Role of Women in Proverbs

Most of us recoil at some Jewish sages’ estimation of women, as reported in works such as Sirach (25:19, 24; 42:12-14) and perhaps even Ecclesiastes (7:27-28).1 As the son of Sirach puts it, “Like the moth emerges from clothes, so wickedness emerges from women; a man’s evil is better than a woman’s goodness…” (Sir. 42:13-14). But does the negative view of women found in later Jewish sages also reflect the perspective on women found in the Book of Proverbs, as some have argued?2 Does the Jewish and Christian canon actually confer inspired status on chauvinistic claims? While some proverbs might sound like this is the case, an examination of their context among other proverbs indicates that the statements are not against women in general.

A Woman As A Sexual Threat

Many proverbs are warnings against the seductive adulteress (5:20; 6:24-35;3 chap. 7; 20:16; 22:14; 27:13; 30:20; cf. 23:27), yet no proverbs warn a young woman to beware of a promiscuous man. This apparent double standard sounds quite different from the double standard by which some modern parents impose strict rules on their daughters while reasoning that “boys will be boys”—but it can be interpreted as no less chauvinistic. Does the writer of Proverbs regard women as more naturally promiscuous and threatening to the opposite gender than men are?

An examination of Proverbs, however, reveals that this is not at all the case. The framework of the introductory section of the book indicates that it is wisdom addressed by the king to his son (1:8; 2:1; 3:1, 22; 4:1, 10; 5:1, 7; 6:1, 20; 7:1,24; cf. 8:32 [Wisdom speaking]). Ancient Near Eastern writers used a father’s impartation of wisdom to a son as a literary device to propagate their wisdom.4 The literary device required that the maxims directly address men. Of what kind of sexual dangers would the author need to warn men? In contrast to some ancient societies (e.g., classical Greece), Israel’s records are virtually devoid of accounts of homosexual interest (except Judg. 19:22);5 the moral danger posed by other men’s wives was far more serious. Had ancient wisdom texts publicly addressed women as well as men, we may guess that such texts would have warned women against seductive men; that Proverbs does not do so reflects not its own chauvinism but the use of an ancient Near Eastern genre which in turn reflects the chauvinism of ancient Near Eastern society.

That Proverbs often reflects and comments on social realities without always, prescribing them as universal ideals may be demonstrated easily enough by its common references to foolish and sinful behavior. Social differences clearly existed between women and men (e.g., 11:16), and whatever these differences tell us about ancient society, they do not make the author who reports them chauvinistic. Yet Solomon and the other inspired Israelite sages never implied that society’s flaws indicated God’s perspective. A “manless” woman was humanly defenseless in that society, but God would defend her (15:25, in contrast to the proud man). Further, warnings against adultery not only respected another man’s marriage (5:20; 6:29) but faithfulness to one’s wife (5:18-19; cf. 31:3). Finally, while ancient male society made women’s “beauty” an issue. Proverbs regards her wisdom and fear of God —her intellectual and spiritual prowess —as more important (11:22; 31:30).

Proverbs is replete with warnings about a quarrelsome wife (19:13; 21:9,19; 25:24; 27:15-16). Again, however, we must point out that the wisdom genre characteristically addressed men (sometimes particularly through the device of a royal son); this does not preclude women from applying the principles to their spouses as well (cf. 26:21). If we replace “wife” with “spouse,” most of us can grant a hearty “Amen” to the principle: It is easier to be alone somewhere than in the presence of a spouse who just wants to fight! (Of course, the principle is more helpful before one enters an unhealthy marriage; Christians cannot use it as an excuse to divorce—1 Cor. 7:10-16.) And Proverbs hardly stops with warnings against contentious spouses; the general principle is that finding a spouse is finding something good (18:22).

In that society even more than today, the wife’s behavior reflected on her husband, providing either fodder for gossip or grounds for praise (12:4; 31:12, 23; and on the whole household, 14:1). But this hardly implies that the author assumed that wives existed only for their husbands’ reputation; any member of the family could honor or disgrace the entire household, although the writer (again following cultural conventions) addresses especially men.

The principle is not limited to wives, but is a general one: one must honor one’s family by right behavior (11:29).

In Praise Of Virtuous Women

Although Proverbs directly addresses the male perspective of its primary audience in ancient Israelite society (thus, for example, reflecting women’s roles especially in the home and men’s especially in the workplace), Proverbs more than balances its warnings against promiscuity with praise of virtue. That the adulteress is female should not cause us to forget that Wisdom is also presented as a woman, sometimes in direct contrast to the adulteress (chap. 9; cf. chap, 8 with chap. 7). The life-giving divine Wisdom Proverbs’ hearers are exhorted to seek is portrayed as feminine.

It is very easy for modern readers to be so put off by ancient culture that we miss the message of the text itself. Proverbs was not prescribing ancient Israelite culture’s gender roles as normative for all cultures, but did comment significantly on the function of those roles within the culture. Proverbs does not emphasize as a model the docile, submissive wife, but portrays the virtuous woman as one who was industrious, wise, and above all else, godly. This is the same picture the rest of the book provides us for the virtuous man.

Proverbs reflects contemporary social realities not only in terms of gender but also of class (e.g., 10:15; 13:8; 14:20; 18:23; 22:7; though cf. 18:10-12; 22:2). Folly or laziness could impoverish a person and so reduce that person to debt slavery (11:29; 12:24). A servant becoming a king or a servant supplanting her mistress are unusual but not impossible circumstances (30:22-23), In ancient Israelite society, household servants apparently were virtually part of the household (31:15), but the same text also indicates another feature of Israelite society: addressing the most literate class who would make primary use of the proverbs, the ideal matron in this passage is part of a household that owns servants (31:15).

In the society in which Proverbs was written, having a servant sometimes depicts having sufficient provision; thus it is better to be unknown with a servant than to lack food while pretending to be known (12:9). At times servants are portrayed almost as children: like children, servants could choose to ignore words not backed up with discipline (29:19), and pampering a servant would lead to trouble (29:21).

Yet Proverbs not only depicts social reality; it also advises its wise hearers how to live in that real society. Although by nature succinct, these pithy proverbs do not suggest revolutionary alternatives to reigning customs; rather, they provide insights into how to function in an imperfect social order and also supply insights into God’s moral ideals. Wisdom is more important than status in the end; a wise servant would supplant a disgraceful son, by being adopted into the household and the inheritance (17:2). Similarly, if one slanders a slave to the slave’s master, presumably leading to the slave’s punishment, the slave max curse the slanderer, bringing trouble on the latter (30:10). Since an undeserved curse would not take effect (26:2), and since the law already declared that God would avenge the poor when they cried out to Him (Exod. 22:22-23; Deut. 15:9; 24:14-15), this passage clearly indicates God’s concern for justice for the slave (cf. Prov, 22:22-23).

Proverbs’ primary concern is moral instruction within the framework of society as it exists, and the collection thus shows that persona] integrity matters more than status: a lowly person is a better person than the one who is rich and proud (cf. 16:8, 19) and better off than an unhappy but wealthy person (15:16).

Proverbs depicts the reality of its day, but provides moral principles in the context of that reality that actually challenge many of its society’s ideals. Yet both the society and moral principles depicted in Proverbs provide an interesting contrast to many cultures before and after them. Although ungodly women appear as a threat to men’s sexual virtue, the emphasis on male virtue challenges any cultural double standard, and virtuous women are praised. Both the genre and internal clues in the text indicate that the principle could be reversed to apply to either ungodly or virtuous men as well.

Although the writer regards a wife’s (spouse’s) contention as difficult. Proverbs nowhere emphasizes a wife’s submission or subordination. A virtuous wife brings honor on her household by her industry, wisdom, and relationship with God. Our culture is very different from that of Solomon, Agur, and the other composers of Israelite proverbs, but the moral principles Proverbs articulates remain helpful today.

PrevPreviousWho is Sophia?
Next1 Timothy 2:9-10 RevistedNext