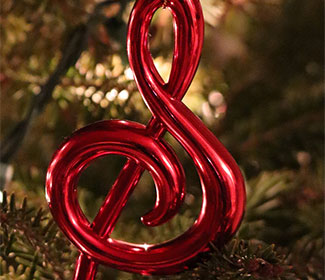 Preaching in the Treble Clef

In a preaching class a male fellow student said, “You sound just like my mother.” His body language and vocal intonation said it all: Bad Thing. The professor marked my sermon manuscript, “A,” with the addition of: “Superb.”

Twenty-five years later, those competing voices represent the tension in which female preaching voices struggle to develop. This was not just a defining moment for me, but also an initiation into the on-going struggle into which I live out my calling and preaching life. It is a challenge male voices do not have.

Seminary Preaching Class: “You have the gift of preaching!

I was that student and knew full well that I would have no use for the spiritual gift of preaching. I was on a path to ministry that I considered acceptable by the church in which I had grown up and, I assumed, by God. Preaching was definitely not on that path—not even in the neighborhood!

Suddenly my experience had taken me into a place beyond my theological understanding. I needed to find out—really search out—what the Scriptures said about women who ministered and what Jesus really wanted with me. What was my call? (Call from God, not from socially accepted versions of that possibility.) What were my gifts? (Really my gifts, not whatever gift mix that might make others comfortable.) How might God use my voice? (If I was really free to use it.)

Now when I teach seminary students, I smile with delight in our first class and I invite them to believe that God’s promises are more amazing than they can possibly dream. But I know, for the women students in particular, this will be a struggle. Treble clef voices are still outside the norm and not necessarily welcome. We will work to help them uncover the voice God has given them; the voice God is blessing them to use.

I don’t think my story or experience is much different from many, many other women who love Jesus and are called and gifted to preach. As I listen to women talk about their journeys to use their gifts most talk about the struggle to find their voices, to be heard, and to have their uniqueness accepted in the church. We are the lucky ones.

Only God knows how many women are called and gifted but find their voices silenced by family, congregations, or leadership. A woman recently told me how, at age seventeen, she had been called to ministry. Her parents were excited and took her to their church board to get a blessing. They received a flat out no. She gave up her call and moved vocationally in a far different direction. Delightfully, I met her in a seminary setting where she is now a middle-aged student and an advocate for other voices in the upper registers.

That kind of “Yes” is what God longs to have each of us experience, yet affirmation remains absent at many levels of church life. One denominational preaching forum I attended was exciting and stimulating. The room was full: there were about 50 men, plus one female Administrative Assistant (alto) and me, an Associate Pastor (soprano). As we sang the closing hymn, our two female voices were completely lost in the chorus of enthusiastic male voices. I remember thinking how much God wants to hear all the voices God has created, the full chorus—not just the bass clef.

For many evangelicals, Treble Clef pastors are still a surprise or at best unsettling. That wears on the woman preacher. As I went to pursue a Doctor of Ministry in Preaching at a consortium of seminaries in Chicago, I realized that I had a bad case of the “You’re Onlys.”

During a trip home in my first summer of class, a friend in the congregation that ordained me asked what I was learning. I said I was learning that preaching was my natural gift—that I loved preaching and was really good at it. She laughed and asked: “Did you think we were just being nice when we told you those things?” How hard it is to hear the affirmation and encouragement in the midst of the “You’re Onlys.”

As I continued to develop my voice, I was blessed to study with a group of people who expected women to be full participants. The first time our group sang together, the sound of the singing echoed off the chapel walls. The men offered to hold their voices back in order for the women’s voices to be heard. I was deeply touched. What a contrast: people purposely creating space for voices other than their own to join this chorus.

Differences between men and women preachers

When I was candidating to be a Senior Pastor, one of the most troublesome issues for the congregation was: “How will we be able to hear you?”

My voice is softer than many men’s voices; I followed a pastor who has the most amazing, resounding bass voice. Does that make my preaching any less powerful? My preaching is also based more upon story, relationship, invitation, and possibility. Are these tendencies inherent in treble clef preaching? Or are they simply personal inclinations that happen to be expressed in my female voice?

As I melded family and ministry, I came to seminary at a later age and did my pastoral work part-time for many years. In my experience, women often have more fragmented ministry lives than men. In the overall scheme of things, this adds up to a significant difference in experience, training, and opportunity for developing one’s preaching voice. The path into my calling has been rich and convoluted. These factors add to the character of my voice.

What are the differences between the genders in regard to preaching? I’d love to provide that answer; we live in a world wildly eager to define gender. But as Christians we want to be biblically thoughtful about gender definitions, careful to avoid cultural stereotypes. Preaching in the treble clef is more about individual style, preference, background, and culture than biology.

Supporting women who answer the call to preach

God is moving in this area of the church. Things are changing, and each of us who uphold egalitarian values can make a difference. We need to recognize that we are still on the cutting edge of gender equality—especially in the preaching life of the church.

Support and encouragement are crucial for freeing and developing treble clef voices. I risk being simplistic, but I am convinced that making a concerted effort to support women in ministry will bring stunning results. For which woman leader are you praying? What female pastor do you encourage? Whose treble clef voice do you thank? We often think we are further down the road to full acceptance than we actually are.

Another simple option might be to support a seminary student. Pray, cheer, do something tangible to encourage her voice. Let her know that when the going gets tough there are others in the body of Christ who will come alongside and pay for coffee. We who are called to care about inclusivity are called to pay attention to what’s really happening and to get into the action. Adopt a female!

Putting female voices in front of the worshiping congregation is crucial in order to change perceptions. Many places say “Yes” to being egalitarian, at least in theory. I think the true test of their belief is whether or not women are actually participating in the ministry of preaching, the pastoral prayer, reading the gospel text, and officiating in the priestly privileges. Ask in your church—could a woman do that? Advocate with the church leadership to have more women visible and audible on Sunday mornings.

When the preaching is only done in male voices, the music is out of balance. It doesn’t have the fullness of God’s original manuscript. The complete range of God’s love song is still waiting to be sung.

Tweet
PrevPreviousTo the Church Leaders About Women
NextLove beyond RomanceNext