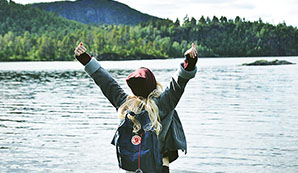 Some people think that the moral qualifications for church leaders recorded in 1 Timothy 3:1-7 and Titus 1:6-9 were written only about men and apply only to men. They believe the implication in these passages is that only men can be church leaders. Yet, despite the use of masculine pronouns in many English translations, there is almost no masculine language in the Greek. In the Greek texts based on better, older manuscripts, these passages in 1 Timothy and Titus are completely free from masculine personal pronouns.

All of the qualifications listed in 1 Timothy 3:1-7 and Titus 1:6-9 can be readily applied to both men and women equally. The one seeming exception is where it says that a church leader should be, literally, a one woman man. This is usually translated into English as “the husband of one wife.”

The phrase, a one woman man, is however an idiom, and there are dangers in applying it too literally. Because it is an idiomatic expression, many people have had difficulty explaining and applying its meaning in the context of contemporary Western church culture; a culture that is vastly different from first century church culture.

If taken literally, the one woman man requirement would rule out unmarried, widowed and divorced men and women from being church leaders; yet Paul says that being single and celibate enables people to serve God better (1 Cor. 7:32-35). The real intent of this expression is marital faithfulness in the church leader who is already married.

All of the qualities listed in 1 Timothy 3:1-7 and Titus 1:6-9, including the ability to lead one’s household, are in fact equally applicable to both genders. According to Paul, it is not only men who can lead their households. Paul advised the younger widows in the Ephesian church to remarry, have children and “keep house” (1 Tim. 5:14). Interestingly, the word Paul uses for “keeping house” here is oikodespotein. The etymology of the word gives the sense “to be the master of a household.” The King James translates 1 Timothy 5:14 as: “I [Paul] desire therefore that the younger widows marry, bear children, rule the household, and give no occasion to the adversary for insulting.”

Undoubtedly most church leaders in early church times were male, and yet it is never stated in the New Testament that a church leader must be a man. The New Living Translation (NLT), (which gives the impression of being gender inclusive because it frequently translates adelphoi into “brothers and sisters”) has taken the bold step of inserting the statement, “so an elder must be a man” into 1 Timothy 3:2. This statement simply does not appear anywhere in any Greek manuscript of the New Testament. The translators of the NLT have inserted this statement to put across their biased opinion that a church leader must be a man. They have tried to pass off their opinion as being “the Word of God.” Had Paul wanted to say “an elder must be a man” he would have done so.

The opening sentence of 1 Timothy chapter 3 literally says, “If someone aspires to overseeship, he/she desires a noble task.” There is absolutely no gender preference suggested here whatsoever.

[Note: This article has been edited from its original version for accuracy and clarity.]

PrevPreviousLiving out the gospel of equality
NextOne Flock and One ShepherdNext