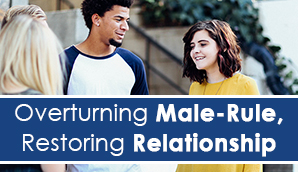 “Your desire will be for your husband, and he will rule over you.” Genesis 3:16b

The oppression of women spans centuries and borders. In virtually every country and culture in the world, women have less-than-equal status to men and they are often relegated to subservient and submissive roles. Women suffer from domestic violence, job barriers, lack of control over their bodies, and fewer options for healthcare. They often do not have a voice in matters as broad as politics or as narrow as what happens within their own families.

If these realities aren’t horrific enough, women experience more than inequity. They are often in physical danger of assault and gendercide as well. In their book, Half the Sky, Nicholas Kristof and Sheryl WuDunn tell us, “Women aged fifteen through forty-four are more likely to be maimed or die from male violence than from cancer, malaria, traffic accidents, and war combined.”[1] A recent documentary film states that the three most deadly words uttered in our world today are, “It’s a girl.”[2]

Two million girls are missing around the world because of their gender. This is due to tragic injustices such as bride-burning (which happens once every two hours in India), gender-selective abortions in China, or health discrimination throughout the world.[3] It is estimated that more girls have been killed because of their gender in any one decade in the last fifty years than the number of people murdered in all the genocides of the 20th century.[4]

For those who survive simply being female, human trafficking flourishes in every country. This depletes the souls of and endangers hundreds of thousands of women and girls.

We can read these numbers and feel horrified and paralyzed. Or, we can refuse to let them be just numbers. We can choose to enter into relationship with the people these numbers represent.

I have met courageous women throughout the world who refuse to live within the post-Fall oppression of others “ruling over” them. They have declared their worth. They live in a Christ-centered, kingdom reality. But, how it costs them to do so!

Many of my heroes live in a poverty-stricken nation in Southeast Asia. A picture of these women sits on my desk in full view, every day. That is exactly where I want them. I want them there to call me to greatness, to remind me of all the opportunities that I must not waste, to push me forward in both sharing their stories and in standing with them.

They are my Huldah’s, prophesying the way forward for me, day in and day out.

The women I am speaking of live in a safe house for victims of trafficking. They range in ages from fifteen to thirty. Their stories testify to the dangers of being born female. Each young woman has her own story of coming out of poverty, trafficking, and/or exploitation—some rescued before being taken into brothels and some rescued after.

One of the women was taken to the local karaoke brothel at the age of thirteen, but she refused to go with customers to be raped. Another ran away before being forced into sexual slavery. It took immense courage to stand against what was required of them in the brothels. Their actions were courageous, not only because of the possible repercussions, but also because of the cultural pressure on them as women to provide for their families in whatever way possible.

These women have said, “No” to degradation because they know their worth. They understand their value in a kingdom reality and live in constant peril because of it.

I have seen God turn Genesis 3:16 around. Wonderful men have joined me on the mission to liberate girls and women. These men are helping to restore a positive image of manhood. These godly men treat girls and women with respect. They listen to them, cry with them, sing with them, and work alongside them.

One of my favorite memories on a trip was observing a man from my church rolling cookie dough beside a young woman who escaped prostitution. Both of them were wearing aprons; both of them were covered in flour. They worked alongside one another in mutual respect and service, neither ruling the other. This is a beautiful example of redeemed relationship between men and women.

“He will rule over you” gets overturned in the New Testament and in our actual lives through the resurrection reality of the kingdom of God! Now, “submit to one another” is our new call.

Walking with one another in humble friendship is our great joy. We see this as we interact with women from Southeast Asia who are more than statistics to us. They are our friends, our sisters, our teachers, and our pastors.

We must know the realities of our sisters around the world in more than just theory. But, we cannot only know. We must do. I encourage you to think about how you might invest in relationship with women who live under great oppression and who are seeking to live in freedom. You don’t have to look far. They are all around us. In leaning into those relationships, you will be living out practical redemption.

This is a forum for conversation and learning. Please keep dialogue constructive and engage respectfully with those who have different perspectives. We reserve the right to edit or delete comments that are offensive, off-topic, or attacking. We also encourage you to share our articles on Facebook and Twitter. We need your help to spread the message of gender equality.

PrevPreviousParenting: Learned Behavior Or Instinct?
Next5 More Ways to Promote the Inclusion of Women in Church LeadershipNext