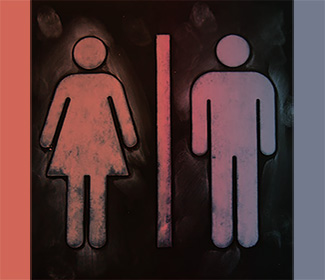 If you want something ironed really well in our house, don’t ask me, ask my husband Malcolm. Trousers are perfectly pressed, shirts and blouses beautifully crease-free — even towels are ironed so they’re extra fluffy. Why do I mention this? Ironing is one of those things that men are not supposed to be able to do. So I’m amused by the proliferation of popular books like Why Men Don’t Iron and Why Men Don’t Listen and Women Can’t Read Maps, which argue that differences between men and women are due most often to biology and are thus fixed and unalterable. Malcolm is far more proficient than I am at ironing, but I’m better than he is at reading maps, and, as he often has to remind me, he is much better at listening.

There are some very simple explanations for this, which have nothing to do with biology. Malcolm spent thirty-eight years in the Royal Air Force. As an apprentice, learning to iron one’s uniform was an essential skill. Malcolm probably had more training in how to iron than I ever had, despite the fact that women are expected to do it. In addition, he trained as a counselor and has spent some of the last twenty years consciously listening to people. I’m sometimes too busy thinking of what I want to say next and finishing his sentences for him. On the other hand, I have always been fascinated by maps; as a child, I became the family navigator when my dad was driving and learned about using maps in my Girl Guides scouting troop. Why should these interests and experiences have anything to do with gender or biology?

When it comes to ironing and reading maps, who performs these tasks better is probably not worth arguing about. But when it comes to leadership, the assumptions we make and the stereotypes we unwittingly fail to challenge can have much more far-reaching consequences.

Take, for instance, the idea that women speak three times as much as men. Women’s speech often attracts labels such as “chat,” “gossip,” “nagging,” and so on — mostly derogatory words. Women are supposed to be more verbally skilled than men and to be more relational in their speech; men, however, are thought to be more task-oriented in their conversation. Yet in the book The Myth of Mars and Venus, author Deborah Cameron challenges assumptions about the way men and women communicate and concludes that there is no evidence that women talk more than men. The real differences are more subtle. For example, in public, higher status speakers (still more often men than women) talk more than lower status ones, while in “private,” domestic interactions, women (implicitly the leaders of the home) talk more than men. Such differences have more to do with power than with either nature or nurture.

These stereotypes make life more difficult for women leaders. The assertion that men and women have different personalities has long been the ground for denying leadership roles to women. In the eighteenth century, those women who occasionally moved into preaching and speaking roles in the church were often considered outlandish — witness English author Samuel Johnson’s words: “A woman’s preaching is like a dog’s walking on his hind legs. It is not done well; but you are surprised to find it done at all.” Until very recently, women were assumed not to have the right personalities for leadership—not to be ambitious or assertive enough.

But today, women are political leaders, they race to the Pole, they win marathons, they start businesses. Expectations about leadership have changed radically over the last twenty years — it has gone relational. We were told by researchers in the 1990s that women would bring the “soft skills” needed for this new style of leadership and would be better collaborative leaders, ideally suited to working in teams. Initially this is an attractive idea, but it’s also subtly dangerous.

Most women I’ve talked to recently think that differences in leadership style have more to do with personality than with gender, though if pushed say things like “women seem to be better at building teams” and are “more approachable” than male colleagues. Some people believe women are more collaborative, but this seems more likely to be learned behavior than somehow innate. I know many male church leaders who lead collaboratively, and it’s very unhelpful to them to imply this is a solely female trait. The truth is that there are often more differences between two women than between an “average” man and an “average” woman. We are who we are for many reasons: God’s gifting, ethnic origin, social background, education and formative experiences, as well as gender.

A number of studies in the last few years, many of which are cited in the book Through the Labyrinth, assert that while women still find it challenging to exercise leadership in environments that have long been dominated by men, the psychological portrait of a good leader is neither masculine nor feminine, but includes traits from both domains. One of the most recent StrengthsFinder books, which helps readers identify their talents, tells the stories of two leaders with outstanding “Achiever” and “Relator” strengths. While some people might expect a male leader to score highly as “Achiever” and a woman as “Relator,” in these examples it is the other way round. Research has also shown that personality traits which are common to many effective leaders, such as extraversion and good people skills, are found equally in men and women.

Thus, one can say with confidence that men and women don’t, in any fundamental way, lead and communicate differently, though individual men and women may have developed different ways of working according to their background and thus may appear to fit the stereotypes. But when working on leadership teams, the path to good teamwork is to treat each person as an individual, not to make assumptions about how they will communicate based on their gender. Indeed, this is the model we see in the Bible.

Lessons from the Bible

In the beginning, God created a team, a mixed-gender team of one man and one woman. Before the fall, these two people were jointly tasked with stewarding all they had been given (Gen. 1:26–28). After the fall, there was disharmony in the team, including enmity between them (Gen. 3:15) and hierarchy (domination by the man, Gen. 3:16).

The world of the Old Testament, like nearly all societies, was patriarchal — the father was the head of the family and men had authority over women and children. Thus, it is not surprising that women leaders were few and far between. Yet we see examples of women leaders, such as Miriam and Deborah, working alongside men. They may have been unusu­al, but in the telling of their stories there is no hint that gender “style” is an issue.

In the New Testament, Jesus gave us a model for Christian leadership. If we read carefully, his model may surprise us, confounding the stereotypes about supposedly male and female behavior. When I helped to lead a Christian summer camp, I devised a workshop on gender. The teenagers thought about their own gender assumptions in light of Jesus and considered questions like: “Where do weeping over Jerusalem and at his friend’s death, cooking fish on the beach, and washing feet fit if men aren’t emotional and ‘don’t do domestic work’?”

The rest of the New Testament also challenges our assumptions about gender. As the Spirit fell at Pentecost, ushering in a new era and restoring what was lost, Peter quoted the words of Joel in Acts 2:17–18:

There is no hint here, or anywhere in the New Testament, that gifts are apportioned according to gender. In the rest of Acts and in Paul’s letters, we see how this prophecy began to be fulfilled, despite cultural contexts in which women were accustomed to being the subordinate partner in the marriage relationship. In Ephesians 4:11–16 and 1 Corinthians 12 and 14:1–33, which describe gifts in the body of Christ, we see no caveats about gender. Gender is significant in 1 Corinthians only when it comes to head-coverings — which appear to be cultural signs of modesty (1 Cor. 11) — and when a new Christian egalitarianism meets old cultural norms of segregated worship and relatively untaught women (1 Cor. 14:34–35).

Speaking, teaching, preaching, and leadership are not gendered gifts. At present very few women are being appointed to lead larger churches. Why? One possible reason for this is that women are thought to be incompetent preachers. Someone once said to me that they’ve never heard a woman preach “as authoritatively as a man.” But who defines what is authoritative? Perhaps many of our inherited assumptions need to be questioned.

We must be aware of our own history and how our gender views were shaped. When I asked one of my male colleagues what had led to his egalitarian convictions, he shared that his mother had been a positive role model and a strong leader. He therefore was convinced that women made good leaders before he encountered any Christian teaching that told him the opposite. On the other hand, sometimes women have had experiences working with men who are stuck in patriarchal attitudes or who fear losing power, and those negative incidents can continue to color how they relate to men for a long time.

The danger of being too aware of possible gender differences is that we can overlook all that we have in common, the task we have to do, and the differences between us as people. So perhaps a better way of thinking in our relationships, whether we are supervising, working with, or report­ing to someone of the other sex, is to see and treat each person as an individual, with respect and care.

When we work with others, it’s much more useful to focus on our common mission than to attempt to foresee how gender differences may make communication difficult. I’ve worked in a variety of mixed-gender teams, and I have never found gender differences in communication style to be the most significant aspect to bear in mind; if I’m relational and he’s logical, or if I’m competitive and he’s cooperative, then that’s just how it is. We must, above all, learn to listen to each other, trust one another, and find points of commonality.

As human beings we all thrive if we feel people care about us and see our individuality as well as our unique contributions to our team. So let’s forget about the stereotypes and seek to respect and honor each other as we work together for God’s glory.