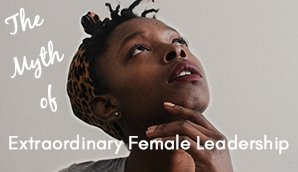 The Myth of Extraordinary Female Leadership

Some Christians believe that female church leaders would be accepted if they “distinguished” themselves. They think that women who are meant to lead ought to be strong enough to subvert the norm without the support and affirmation of other Christians. Generally, this declaration is followed by a list of outstanding female church leaders who succeeded despite gender discrimination in the church.

But this expectation of female excellence is unjust. If we hold female leaders to higher standards than male leaders, we discriminate against worthy women leaders and fail to address the gender-bias that preserves the “good old boys club” in the church.

Women should be recognized and accepted as called and qualified to lead to the same degree as men, but they aren’t.

We don’t expect male church leaders to demonstrate an outstanding gifting by the Holy Spirit before they are ordained and assimilated into church leadership and life. In my entire life, I have met only a few extraordinary male ministers. Yet, we readily accept, respect, and work alongside these uncontested “ordinary” male church leaders. They aren’t expected to succeed without the support of the body of Christ.

This unequal treatment of female church leaders reminds me of Bréne Brown’s observation that we live in a culture of:

Never enough… we’re never extraordinary enough… If we’re not doing extraordinary, huge public things, that we’re not enough. That somehow leading an ordinary life, waking up in the morning, loving the people around us, doing our best work, being a part of the community… an ordinary life is synonymous with a meaningless life.

Consider the Apostle Paul, who persecuted Christians before his conversion. Following his conversion and despite rumors of his demonstrated call and giftedness for ministry, the Jerusalem Council denied him acceptance into their fold (Acts 9:1-26). It was the validation of another believer, Barnabas, not Paul’s extraordinary gifts, that ultimately ensured his acceptance into the Christian leadership body (Acts 9:27-28).

Barnabas stood up to the Jerusalem Council and affirmed and validated Paul’s calling. The result was the acceptance of both Paul and his ministry into Christ’s body in Jerusalem, and subsequently, a thriving of ministry in and outside Jerusalem.

The lack of validation of clearly called female church leaders by male leaders is responsible for the challenges many women in ministry face.

Women need “Barnabases” to open the doors for them as church leaders.

No branch can bear fruit by itself; it must remain in the vine (John 15:14b).

Standing in the way of women’s leadership in the church jeopardizes the body’s fruitfulness. Further, women are detached from the body of support that all Christians need to develop their gifts.

Is it biblical to sit back and expect women to magically thrive without actually affirming and supporting their gifts?

Christians are wrong to withhold their support from female leaders, believing that extraordinary gifts will subvert gender discrimination in the church.

Expecting female leadership to thrive without support from the body of Christ is like saying, “Let’s create an eye, and let it function on its own as a human being!” In other words, we require support to thrive.

My experience in church planting confirmed this. From the beginning, the majority stood back and watched, expecting me to fail because they saw no extraordinary giftedness in me.

For six years, I worked without affirmation, partnership, recognition, or support from the local body of Christ. I struggled, even losing all of my members in 2013. And yet, not one church leader in my community stepped up to stand alongside, encourage, or partner with me.

Things changed in 2014 when an established female leader in another denomination took me by the hand and led me, as Barnabas did, to her denomination. Within a year of that affirmation, validation, and support, my church grew from two to fifty members!

Nothing about me had changed. I was still operating with the same gifts and methods I had been using in past years. The only thing that changed was that I was in an environment that accepted me and nurtured my gifts. My ministry thrived because I was loved and celebrated.

Bréne Brown says, “In the absence of love and belonging, there’s always suffering.” For six long years, my ministry and I suffered unnecessarily, until we were immersed in a community that affirmed my call to lead.

Extraordinariness is exactly that, extraordinary, and not the norm. I believe that women will succeed as leaders when they have the support and encouragement of the body of Christ that their male counterparts can already expect.

The church needs to repent of the unnecessary burden and pressure on female leaders to be outstanding as proof of their calling. God only requires faithfulness from each person, male and female, in living out their calling. Therefore, the church should support the wide range of gifts of both men and women.