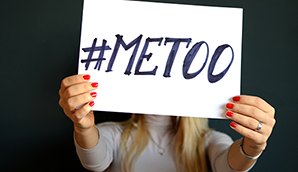 #MeToo and #ChurchToo: The Perfect Storm

This is a reflection from CBE’s president, Dr. Mimi Haddad, on the #MeToo and #ChurchToo conversations around sexual abuse and harassment.

My husband and I begin most weekends at our local coffee shop, enjoying breakfast with neighbors. Recently, one neighbor—a renowned poet—recalled his experiences studying poetry at Columbia University. Students were asked to submit a recent poem they’d written. These were returned the following day with the name of each student’s favorite authors scribbled at the end. The professor could discern, with 100% accuracy, who they had been reading. Students were stunned! They’d unknowingly expressed in their work what they’d absorbed in their imaginations.

This same reality—we express what our imaginations absorb—can be seen in the avalanche of abuse reported this year. We are witnessing a global unveiling of abusers who imagined that their power and privilege was invincible. Within twenty-four hours, twelve million #MeToo survivors uncovered an abuse epidemic. As Christian women exposed abuse in the church with #ChurchToo, the impunity of perpetrators was glaringly visible. And the stories of victims—too many to grasp—left us shaking.

Yet, it is the task of the church to discern how and why so much abuse went unaddressed. Like the professor at Columbia, we can begin by asking: what feeds the imaginations of male Christian perpetrators?

As victims used their voices on social media, I remembered the countless conversations with strangers, friends, colleagues, and family who were silenced and marginalized while their abusers were heard and protected. For more than twenty years, I have watched the church defend the authority and reputation of abusers, feeding their imaginations with the promise of impunity. In doing so, the church has colluded with perpetrators in their abuse of women and demeaning of the gospel.

What is the impact on the imaginations of Christian men?

Thankfully, there is a counter-current welcoming the voices and agency of survivors. Egalitarian theology demonstrates its capacity to build happier and less abusive marriages, just as it attends to survivors of abuse. Each year, biblical gender equality gains ground in church after church, and more and more people discover egalitarian resources. As a result, fewer believe that male dominance and female submission is just, healthy, or God’s ideal.

As this movement grows, courageous victims are disclosing abuse and perpetrators are being held accountable. This is the fruit of God’s justice and the labor of many who feed imaginations with the truth: God created male and female in God’s image to govern the world in mutuality. The #MeToo and #ChurchToo conversations mark another victory for justice as well as the first dying days of patriarchy. We must press forward until it gasps its last breath. May it be soon.

PrevPreviousAdvent and the God Who Makes Room
NextMade to Lead: Empowering Women for MinistryNext