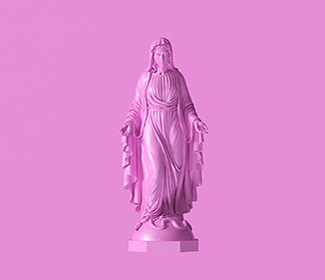 Mary the Brave: Neither Meek nor Superhuman

One Sunday, about a year ago, I was visiting a new church. It was December, and the pastor was preaching about Mary. I was surprised by how well he positioned Mary as an equal to the congregation—neither meek nor superhuman. He presented Mary to us as if she was someone whose experience was worth trying to empathize with, whether we were male or female. As he presented Mary to us this way, I tried to put myself in Mary’s shoes, remembering what it was like to be a teenage girl. In this exercise, I realized something I never had before about Mary: she was brave.

There are differences between my experience and Mary’s that should be named, differences that go beyond the 2,000 years that separate us. I am a white woman living in the United States, the daughter of educated parents. I grew up in a mostly wealthy town. Because I am a white girl from an educated family in a wealthy town, most of the systems surrounding me as a teenager were set up to help me succeed, so long as I played by their rules. For Mary, the situation was different. Mary was a Middle Eastern Jewish girl growing up under the Roman Empire. She was not from an educated family, nor was she from a wealthy town. Most of the systems surrounding her were not set up to help her succeed; these systems didn’t care much about non-wealthy minority women.

However, there is one distinct similarity between Mary’s experience and my own, one that I realized while sitting in that sanctuary trying to identify with this girl whose life looked little to nothing like my own. It is one, I believe, most every teen girl can relate to: getting pregnant could have serious consequences. When I was a teen, I was reminded often that if I became pregnant, few of those aforementioned systems would continue advocating for my success, and my life would become much harder. For Mary, in her cultural and social location, getting pregnant outside of the security of marriage had even more serious consequences.

This made something about the reality of Mary’s experience clear to me: A messenger of God visited her and asked her to embrace what would have felt like a life-shattering event to me as a teen but had the potential to be an actual life-shattering event for Mary. Have you ever listened to a sermon where the pastor points out Joseph’s goodness in Matthew 1 for wanting to divorce her quietly? That’s because had it come out that Mary was pregnant by someone other than Joseph, Mosaic law said she could be stoned. Sure, Joseph was good, but he’s not the hero here. No, the hero is undeniably Mary, who accepted her part in bringing God to earth despite the consequences and notably before she knew how her betrothed would react. Mary knew her own time better than us; she knew what happened to teen girls who are supposed to be virgins but are suddenly pregnant. Her story, as told in Luke 1, gives us no reason to believe she was naïve about the implications of what the messenger of the Lord said.

Nothing illustrates her bravery more than the way Mary reacts to the news. Luke says that after the messenger of the Lord left, Mary immediately visited Elizabeth, her cousin. She didn’t wait in fear nor did she seem worried. As one translation puts it, Mary “got up and hurried” to Elizabeth (Luke 1:39, CEB). And Elizabeth, herself pregnant outside of the norm, welcomed her in, accepting Mary’s story without doubt or question. Do you notice that at this point in Luke’s recounting, the only two people in the world who know what is about to happen are these Jewish women? They are the first ones let in on the secret that God is going to do something unprecedented. As the story goes on, how the men and wider community react to Mary’s pregnancy is of little consequence, at least as Luke tells it. What is important is the experience of Mary and Elizabeth.

Perhaps grasping the magnitude of this, the text says Mary sang a song about the God who visited her. In her song she praised this One who “has scattered those with arrogant thoughts and proud inclinations,” “pulled the powerful down from their thrones,” and “sent the rich away empty-handed” (Luke 1:51–53, CEB). She proclaimed that in visiting her, this One has instead “filled the hungry with good things” and “lifted up the lowly” (Luke 1:52–53, CEB). Even more remarkably, she also identified the God who visited Abraham as the same God who had visited her. You see, Mary, in addition to being brave, was also a contextual theologian. Yes, she knew that her pregnancy could cause upheaval in her family and community. But she also knew there were serious implications to God calling on her, like God called on Abraham, in order to show mercy to Israel.

Mary saw this visit from God for the powerful theological statement it was. This visit upended the cultural narrative telling Mary what a devout Jewish girl looked like. It upends still today our own narrative about who God exalts and uses to bring redemption. And Mary got that. Why else would she sing about the Mighty One doing great things for her even as she faced social turmoil (Luke 1:49)? What else could give her the strength she needed to face her future?

Mary’s bravery was a result of an encounter that revealed to her, unmistakably, who God was. Her experience of God gave her the ability to believe that God, in calling on her, would also protect her. She also knew, years before Jesus preached it and decades before Paul wrote it, that God often chooses the people that the powerful overlook and underestimate.

That day in church, the image of Mary I’d unconsciously inherited—the one that held her up as meek, quiet, and submissive, the one that had made her different from me and other women—shattered. Instead, I saw Mary for who I think she was: faithfully courageous, strong, brave, but also, a human woman. Yes, Mary was right when she said, “from now on, everyone will consider me highly favored” (Luke 1:48, CEB), but let’s not allow the privilege of hindsight to overlook the grit of her lived experience. Most importantly, let us not ignore what her experience says about her and about God. Instead, let us allow Mary’s story to teach us never to twist faithful bravery from underestimated people into meekness and submission. And may her story inspire us to be faithfully brave, too.