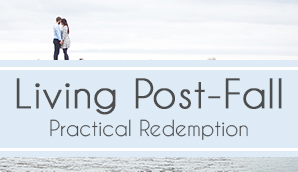 To the woman he said,
“I will make your pains in childbearing very severe;
With painful labor you will give birth to children.
Your desire will be for your husband,
and he will rule over you.”

To Adam he said, “Because you listened to your wife and ate fruit from the tree about which I commanded you, ‘You must not eat from it,’

“Cursed is the ground because of you;
through painful toil you will eat food from it
all the days of your life.
It will produce thorns and thistles for you,
and you will eat the plants of the field.
By the sweat of your brow
you will eat your food
until you return to the ground,
since from it you were taken;
for dust you are
and to dust you will return.”

We hear these words written specifically for Adam and Eve, but we know that the repercussions extend to all people the world over.

It’s not fair, we might think! If only they had not eaten of the fruit, men and women would be serving side-by-side without the scourge of dominance to distort their view of one another. Work would be fulfilling for all of us and we would not be struggling with a never-ending, unattainable quest for balance.

As a woman, I have been tempted to think that men received the better end of the deal. Weeds compared to labor pains and oppression? No competition there!

Well, maybe, maybe not. I believe that the effects of the Fall are much broader than we imagine.

“Pain in child-bearing” has come to mean more to me than simple physical pain. “The sweat of your brow” seems to imply something far deeper than mere hard physical work, even hinting at a question of identity and a battle with futility.

There is a plethora of pain involved in living life on the other side of the Fall. Our work is to name the struggles. This takes power away from the consequences of the Fall and helps us to find a different road, a redemptive path through the brokenness to life.

I believe that the Fall has created a yearning within humans for the wholeness that the first couple experienced. Adam and Eve knew that wholeness when they were given a divine mandate to care for creation. Their mission unified them in the meaningful work of caring for creation and children (Genesis 1:28). Both were given this mandate. Both shared the call to meaningful work and meaningful relationships.

And this is the wholeness that we lost in the Fall, the unity of value and purpose, which we strive for today.

The joint mandate was tragically altered in the practicalities of its outworking. The mandate did not change, but the cost of fulfilling it became massive. For the man, work became consuming, and his tyranny over others became normal. For the woman, motherhood became a source of intense struggle, and gender hierarchy and oppression became part of humanity’s story.

So what does that struggle and tyranny look like?

Obviously, it manifests differently in people based on personality, cultural background, and a host of other identity-shaping realities.

Yet, I hope to shed light on humanity’s common experience of the Fall in this series.

I will address human trafficking, cultural expressions of the oppression of women, the inequities of labor between sexes in raising children, and how churches can begin to move beyond just paying lip service to the value of women in ministry.

This is Part 1 in a series exploring the consequences of the Fall on men, women, relationships, and the world. See Part 2.