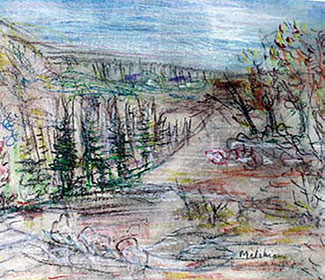 Perhaps there are others like me, or perhaps I was a slow learner. I am not sure I really grew up until I was 40, three years after I became a widow.

Raised in an Open Brethren home on a farm in the North Island of New Zealand, I longed to serve God and was planning missionary work by the time I was 12 years old. There were few supported positions for men and none for women in church work. Overseas mission was the only place for women in Christian service, but I did not see that for many years.

I began my college studies in Auckland city, and as I walked through the park on my way to lectures, I often wondered, “As a woman, do I have to obey all the men in my assembly, or only my father or husband?” What a vulnerable thought! Obey any man in the assembly! Years later my father assured me he had not intended to raise me with such a subordinate attitude, but there I was. By God’s grace, my conservative temperament also kept me out of harm.

I learned to speak for myself in the InterVarsity Fellowship prayer gatherings and Bible study groups. But when I returned as a teacher to my home town, I found myself muzzled. On Sunday morning and the Wednesday evening prayer and Bible study I could not pray in the mixed group nor offer a suggestion in the discussion. If I was smart, I could ask a question like, “Do you think Paul meant communion in this verse?” to shape the discussion. That was all.

When I started studying for a Bachelor of Divinity (the equivalent of M.Div.), a friend asked, “Why are you studying when you are Brethren and won’t be able to use it?” Naively, I had no idea why I was beavering away on Greek and Biblical history.

I met my Baptist husband Brian, another high school teacher, and we left for India within 12 months of our wedding. We taught at a school for missionaries’ children and our four delightful daughters were born. Brian wanted to do his BD too, so he persuaded me to pick up the study again. The whole project took me 11 years, studying part-time. I still did not know why I was doing it. Brian taught full-time, preached sometimes, taught a Bible class, and conducted choirs, and I happily stayed home with the children. When we finished the study and moved to Nepal where Brian was a school principal, we continued the same pattern.

Then my sportsman husband died climbing in the mountains in 1980. I was 37. In the months of mourning, I experienced kindness from my rural assembly back in New Zealand—and invisibility when it came to Christian work. As a returned missionary, high school teacher, and holder of a BD, I was more qualified than any leader there, but they could not see I may have something to offer.

Then came the time when I think I finally grew up, when I was willing to go against the wishes of a man I loved, in this case my father. I felt God directed me to move to Auckland city in 1984, but my father insisted the country life was safer for the children than the temptations of the city. We moved anyway. I had learned to decide for myself. I worked part time as a writer, and full-time from when the youngest was 11, working for two Christian newspapers, then for World Vision.

Bringing up four daughters required energy and prayer, but it was not a burden. The girls were 11 down to four years when their father died, but they were well-behaved and God gave me the health a mother needs to keep two steps ahead. We had prayers, music practices, sports, limited television, and wonderful summer holidays with aunts, uncles, and cousins. Even more, we took to backpacking in the New Zealand forest and mountains on many weekends and holidays. We learned resourcefulness, stamina, decision-making, the highs of accomplishing a physical challenge, and the beauty of the mountains.

One winter we all went back to Nepal. I did not know any other widow who took her four daughters aged 11 to 18 trekking to the Annapurna Base Camp in the high Himalayas, but it was a formative time for us and a load of fun.

In 2004 Kaaren and Rosalind joined a five-member party that traveled to the north of Tibet and made a world-first human-powered traverse down the Mekong River to Vietnam, trekking for two weeks, cycling 2,500 km, and paddling 2,500 km by kayak and rubber raft. I guess one would call them strong daughters, though I did not know the label.

What drove me during this time?

First, I did not feel as if I was driving. That we worked hard, lived frugally, and took our leisure in music and in outdoor sport was our family culture. Second, I experienced the meaning of Christian hope during the period of grieving—not only the hope of seeing my husband in heaven, but also that life has meaning and hope here and now. Third, my family gave me warmth and support. And the fourth is also significant—I had learned a level of mental and emotional independence while doing so much of my study and writing on my own.

I did not always get it right. I did not always understand how much my daughters missed their father. I tried to be a caring and fun mother, but I was only one person. Uncles, aunts, and grandparents were a great help, but the lack of a father is a lack of part of one’s identity, which was deeper than my experience in the lack of my beloved husband. I think my daughters did not often get a chance to voice their deep sadness. I asked later about that. One answer was, “Oh, yes, Mum. But I had a happy childhood. Don’t worry.” Phew! Well, none of us are perfect.

I returned to India 10 years ago. One of the hardest things happened then, years after Brian died, when I had to learn how to live alone in the context of an Indian city. Daughters living at home had protected me from that aspect for 15 years.

I struggled. I used to finish work at 5:00 p.m. with the dread feeling that I had nobody to talk to until 9:00 a.m. the next morning. I walked the streets to avoid returning to my empty apartment, and at the time few had email and I could not get a phone.

I looked forward to my leave in New Zealand to rely on my daughters for company, but they quite rightly had their own working lives and husbands.

I needed new skills and it took three years to find them.

The first new skill was spiritual—learning to listen to God more, keeping a spiritual journal, taking spiritual retreats at times, knowing that God would indeed speak to me. Using a spiritual director and keeping a journal were keys to listening to and talking to God. This process of spiritual renewal enabled me survive in a culture that was not my own.

The other skill was a hobby—bird-watching in the fields and lanes around where I lived on campus at the South Asia Institute of Advanced Christian Studies (SAIACS) near Bangalore, South India. Going out walking was healthy, and learning to identify the birds and observe their characteristics and their beauty became part of my spirituality as well, recognizing them as part of God’s creation and at times an inspiration.

By then I was editing theological and missiological books, lecturing on preaching and academic writing, and writing about family issues for India. Realizing that writing had uniquely prepared me for teaching homiletics, I enrolled in the Doctor of Ministry in Preaching program through Gordon Conwell Theological Seminary, Massachusetts, in 1999. When I attended my first course, I discovered that I was the only woman in a class of 24 men, many unsympathetic to my being in the class.

But I had advantages. My daughters were grown and did not need my time, I had broader perspectives as an international student and a missionary, and being a writer was a great preparation for writing a dissertation. When I attended the third residential session in January 2002, I defended my thesis and the professor addressed me in front of the class as Dr. Wood. I was the oldest in the class, the only woman, and the other students had not even started their dissertations.

The ups and downs of being a woman in ministry continue. Not many people want a woman to teach homiletics, despite the fact that my students love my classes. I am beginning to do more teaching and writing on the equality of women and men in Asia.

My own last chapters are not written yet. I find I need support from friends, family, and my mission, and sometimes time out after a difficult patch. But I have also learned that I can count on my Savior to prop me up and give me courage to keep going.