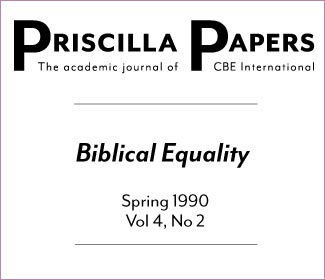 The Husband of One Wife?

There is considerable debate as to how we should understand the command that a bishop, elder, or deacon should be the husband of one wife. (I Timothy 2:2,12. Titus 1:6) Sometimes these verses are used to argue that only men may be deacons, elders, or bishops because only men have wives. Actually, women enrolled in the order to widows were required to have (or have had) only one husband. (I Timothy 5:9).

Sometimes inscriptions described a Roman woman as “univira” – having had but one husband. This was an honorific title and implied special virtue in an age when multiple marriages were all too common. Bruce Fleming recently called to our attention that this commendation appears on both pagan and Jewish tomb-stones, whether the dead individual had been a man or a woman.

The expression indicated a dedication to one’s spouse. For more information and bibliography, we refer our readers to a commentary on I Timothy 3:2 in Traduction Oecuménique de la Bible, édition intégrale, Nouveau Testament, Les Éditions Cerf, 29 Bd Latour-Maubourg, Paris VII, 1981, p. 646, n. a. from which we quote:

None would question that the New Testament enjoins single-hearted commitment of husband and wife to one another. Nevertheless, another facet of Jewish family life may have been addressed in the scriptural command that men in leadership should have only one wife.

The recent publication of documents discovered in a cave about five and a half kilometers from the Dead Sea has demonstrated that polygamy was far more common in Jewish families than had been previously supposed.

Along with many household items and about twenty skeletons, a cache of letters and legal documents lay in a cave known as the Cave of Letters. The dead individuals had apparently taken refuge there during the Bar Kochba Rebellion and had brought with them important possessions.

In the case of one woman, Babatha, this included a collection of thirty-five carefully preserved legal documents dating from AD 93/94 to 132. They had been bound together according to subject and stashed in a leather bag, which was then placed, along with a considerable amount of valuable flax threat, in an old water skin and hidden under a pile of rocks.

Although Babatha was probably only about thirty years of age, her life had been a a stormy one which can be charted by marriage deeds, law-suits, sales contracts and so forth. She was married at an early age and bore her husband a son. She was then widowed while the child and still very young.

Even though Babatha now possessed considerable property, her second marriage was far less advantageous. The new husband, Joseph, already had a living wife from whom he was not divorced. After his death, a property dispute erupted between the two widows; and the legal proceedings still survive. As the women address each other, the dead man is twice called “my and your late husband” (# 26). Naphthali Lewis writes:

In any case, Babatha’s second marriage sheds a bright new light upon the extent to which polygamy was practiced by the Jews of the tannatitic period. The prevailing view among the scholars who have studied the question is that long before AD 393, when the Emperor Theodosius I illegalized polygamy among the Jews living in the Roman Empire, Jewish life had become essentially monogamous, the luxury of the polygamous state being confined to exceptional situations or circumstances…That bigamy was a continuing practice is also attested by the fact that the author of the Damascus document denounced it as a violation of the injunction of Leviticus 18:18. [Damascus Document IV, 1.21, cf. C. Rabin The Zadokite Documents (Oxford, 1954) pp. 16-17.]

The Documents from the Bar Kokhaba Period in the Cave of Letters. Greek Papyri, edited by Naphtahli Lewis. Jerusalem: 1989, p. 23-24.

Other known cases of bigamy included two of Herod’s sons, a steward of Agrippa, a member of the Sanhedrin and members of priestly families. The reader is referred to L. M. Epstein, Marriage Laws in the Bible and the Talmud. Cambridge: 1942.

The case of Babatha, however, demonstrates that the practice was by no means limited to the aristocracy, and polygamy would certainly have been unacceptable for men who were Christian leaders.

PrevPreviousWomen: Too Fragile For the Frontline?
NextTheosebeia, a Priestly Colleague of Gregory of NyssaNext