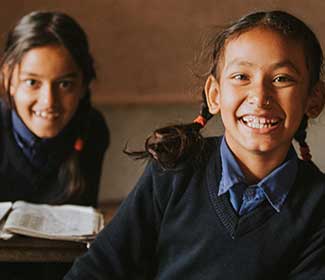 Humanity Flourishes When We Invest in Girls’ Education

In desperate need of medical expertise, a patient was referred to a woman with extraordinary skill and training in a specialized field. Hesitantly, he made an appointment. After that first appointment, the patient admitted that despite the woman’s training and reputation, he could not overcome his view that men are more competent and objective than women. Lacking trust in women, he asked to be treated by her male colleague. Sadly, his view is not an anomaly. Research suggests that many men are reluctant to view women as equally competent to men, despite their education.

According to Forbes, women must obtain an advanced degree to earn as much as men for the same work. While women account for fifty-six percent of all college students in the US, they are paid eighty cents to men’s dollar for performing the same job after they graduate. The pay disparities are even greater for women of color. Women in the US are not only earning higher degrees for the same pay, but they also often face doubt about their skills compared to men both in school and at work.

Educational disparities outside the West also have significant—and even life-threatening—consequences for women and girls. Data from the United Nations demonstrates that removing educational barriers for girls and women leads to significant humanitarian gains. Raising the rate of women and girl’s education is shown to lower maternal mortality, because educated women are less likely to be in relationships with men who want more children than they do. What is more, overcoming educational barriers to girls and women also drives economic growth, according to the United Nation’s Commission on the Status of Women. For these reasons, humanitarian organizations are intentionally pursuing practical steps to keep girls and women in school. One sensible measure that has gained international traction is the free distribution of sanitary towels. This year, Kenya’s Gender Affairs Cabinet Secretary, Margaret Kobia, led an initiative to provide one million sanitary pads to Kenyan school girls. CBE is also helping to provide sanitary towels through our partner projects in East Africa.

Women often lead endeavors to ensure that girls and women have educational opportunities equal to boys and men. Consider the first woman to head an African country, Ellen Johnson Sirleaf. After becoming president of Liberia, Sirleaf not only provided free elementary education to both boys and girls, but she also made it mandatory! She herself is a model of academic achievement, having received an advanced degree from Harvard University. In a similar way, women-led change in the church begins with education. CBE’s founders recognized that leveling the ground for women in the church would require women earning academic degrees not only in seminary but also at the PhD level.

Almost immediately upon enrolling in seminary, I realized that as a woman in an academic community divided over women’s ordination, every academic gain made was not only a personal achievement but one that served a movement. It is with a tremendous sense of responsibility that women seminarians face their academic work. Because of this, many of us organized and worked collaboratively on projects aimed to bring awareness and change. Spending hundreds of hours each year promoting women’s equality, it was exhilarating to watch attitudes change. It was even more gratifying when our seminary acknowledged our leadership—three of us received a president’s scholarship and one of us earned our department’s highest academic award. Two of us found our life’s calling through these educational experiences; both of us now also teach seminary students. We have come full circle.

As seminary faculty, I now have the responsibility of supporting women students and their allies. Seminarians today are armed with many more resources and strategies than were available to me as a student. While so much has changed for the good, there remains a heavy burden in my heart for single women in seminary and especially women of color. Many of these women feel isolated as they quietly and courageously hone their gifts and callings in a world of married, white seminarians.

All women in seminary and higher education need our support. For this reason, CBE has established the Alvera Mickelsen Memorial Scholarship (AMMS), recently awarded to three women pursuing graduate degrees in ministry. Now in its second year, the AMMS aims to place women beside men in churches and ministries, knowing that adding three or more women to all male leadership teams lowers unethical practices and improves productivity and organizational effectiveness.

God’s plan for human flourishing is that women and men work side by side in all professions. For this to become a reality, we must support women’s education globally, especially women-led initiatives to challenge gender disparities in school. From sanitary napkins to scholarships for women in ministry, we invite you to be part of this work and the blessings that follow. Will you join us?