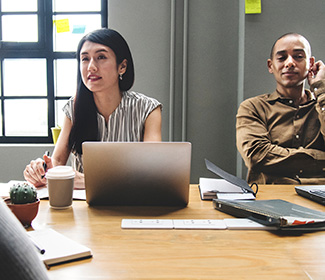 It was handwritten in black sharpie on a big white page—just one quote among many others on one of those big flip chart tripods. Some life moments sparkle with meaning and clarity, and this was one of those moments for me. I felt my face get hot and my insides went queasy. I hoped no one would notice that sentence, yet I also wanted everyone to see—and affirm—it.

Let me back up.

Seven years after we’d planted a church, our team was in crisis mode. The church needed something, but none of us could agree on what exactly that “something” was. We were a core team of eight, four married couples who lived and breathed church ministry. But now that we were settling in for the long haul, we found that the gifts and talents that made us a compatible and effective planting team were not the same gifts and talents we’d need to manage that church. We were cracking. We hired a strategic vision team to tell us what was wrong and how to fix it. That group was responsible for the suggestion that made my stomach turn inside out. Someone in our church had said it, and the strategy group thought it important enough to write down for us to consider.

My friends and co-workers chuckled good-naturedly at the sentiment, but the idea was disregarded without much thought. Of course Kay can’t be an elder. Kay is a woman. And although Kay spends thirty plus hours a week ministering to our body of believers and studying the binding off of her Bible, of course she can’t be an elder. Women can plant churches, but they can’t have authority over men when those churches take off. Of course.

I was an unpaid pastor and untitled deacon for seven years as we planted and grew a church out of nothing. I counseled. I taught. I encouraged. I fed. I made decisions. I organized. I designed. I led. A title would have been nice, sure. But I was doing all of the things those with official titles did, and it was fulfilling at the time. Since no one was sure what to call me, “elder’s wife” stuck. But I was always one step removed from a position of visible authority, or even the idea that I might be called to that role. Until someone noticed my gifts and call and wrote it down in black sharpie.

As I read my name on the board, I felt different. For the first time in all my years serving the church, I felt like I had a purpose and a place—even without proper recognition. Or a paycheck. They didn’t make me an elder. Despite all my work and dedication as a church planter, the thought was never even considered because I was a woman.

The church we planted was vocally complementarian, but effectively egalitarian. All four of the founding couples had strong wives. We worked in partnership with our husbands, and our voices were respected and heard. We believed the men had the last word, but they never spoke it. I taught and counseled as a complementarian for a decade, teaching wives how to submit and husbands how to love.

I believed that as a woman, God had gifted me for ministry, but had limited me to certain roles. Once, my male co-worker who served as pastor mentioned putting me in the pulpit. I balked and said something funny about “liking that too much,” with the unspoken implication that it would be a slippery slope for me. I thought it might tempt me to seek other leadership roles, outside of what I believed was God’s design. My coworker never mentioned it again.

After that strategy meeting, my husband, a founding elder of the church plant for seven years, asked me if he could step down. He knew that my quasi title in the church depended on his position and how important that was to me, but being an elder never sat easy with him. When we agreed that would be best for him, it became clear: I had no position without his. His official position lent credibility to my unofficial one. How could I now justify all the roles I’d filled before? I wasn’t a pastor, although I counseled in the place of one. I wasn’t a deacon, although I served in every function required of a deacon. I wasn’t an elder, although my advice was sought at every level. Now, I wasn’t even an elder’s wife. I made no sense.

I know I’m not the only woman to be passed over for formal leadership after a church they worked hard to plant is established. Something shifts when a woman asks that her work and calling be formally recognized in these spaces. The leadership and direction she previously provided (often for free) and without objection during the church planting phase becomes unacceptable and even “rebellious.” These are just a few of the inconsistencies that drove me to reconsider my beliefs about gender roles.

When I read those life-altering words, an idea was planted in my mind that couldn’t be erased. Even though I’d never actually preached or actively defied complementarianism, I found myself sitting at the top of the slide into egalitarianism. I was propelled on a journey of personal exploration into the three problem passages barring the way for women in ministry. Seeing the inconsistencies and arbitrary restrictions during my time as a church planter, I searched Scripture for a different understanding. As I blogged through my discoveries, I was helped along by many wise egalitarians. They walked alongside me, guided my steps, and answered my most challenging questions. It wasn’t always easy, but God’s Spirit comforted me as I revealed my new beliefs to my husband, family, and friends. And though I at first wore the label “Christian feminist” with shame and then with mild hesitation, I now claim it with pride.

That strategy meeting took place just a few months before my husband and I moved to another town. I would never lead in that church we’d worked so hard to plant, but the journey I began there continued. I realize now that God’s call was always present in my life, but I misread it. He had to write it in black sharpie for me to figure it out.

Yes. I should be.

PrevPreviousWe Can’t Ignore Rape in the Bible, Not If We Want to End Sexual Violence
NextEducated: A MemoirNext