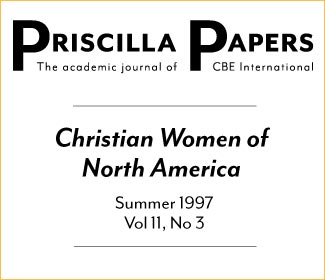 How Does Paul Interpret Eve in 1 Timothy 2?

Evangelical interpreters, egalitarians and complementarians alike, have slain many trees over Paul’s precise point in citing Eve in 1 Timothy 2:13-15. Is Eve a transcultural example, or merely an example applicable to the easily-deceived Ephesian women and those like them?

How Paul Reads the Old Testament

Often, perhaps even usually, Paul reads the Old Testament in a straightforward manner, as we usually do. For example, he applies commands given to Israel to all believers who have accepted Israel’s Bible (e.g., Rom 13:9); principles from Israelite law (e.g., Deut 19:15) can help guide the church (2 Cor 13:1). But what happens when we must address an issue which no specific biblical text addresses? We normally look for texts that address similar principles and draw analogies between those texts and the situation we must address; Paul did the same thing.

Paul also often universalizes biblical texts by analogy. Because his contemporaries, both Jewish and Gentile, customarily drew on both positive and negative models in history to make their points, Paul’s audience would have followed his approach easily enough. Many of his examples are easy for us to follow too. Thus Abraham becomes a model for believers in Romans 4 (though Paul’s contemporaries applied the analogy on ethnic lines, to Israel). His contemporaries would have found his connection between Adam and humanity in general (Rom 5:12-21) more like their own (compare e.g., the rabbis, 2 Baruch, 4 Ezra).l

Is this to deny that we could apply some of these Old Testament texts in different ways? No. Surely these texts can also be applied to a variety of situations. For example, Paul specifically applies to the remnant of Israel the model of the seven thousand who did not bow their knees to Baal (Rom 11:4); but we could also apply the example of their obedience to all believers. Paul applies David’s prayer for vindication among his enemies (Ps 69:22-23, in the context of the righteous sufferer) specifically to those of Israel who disbelieve in Jesus (Rom 11:7-11) but one could apply the principle to any righteous sufferer praying for vindication. This is the way we normally read and preach Scripture.

This is also the way Paul applies Scripture. Paul’s specific applications an: often Christological, because Christ is rightly his focus: Thus Paul can draw analogies between Israel’s provision in the rock with Christ, between God’s provision of food in the wilderness with the Lord’s Supper, and between Israel’s crossing the sea with baptism (1 Cor 10:1-4). Yet Paul reports these examples especially for the purposes of moral exhortation, to warn that God judges the disobedient regardless of their spiritual advantages (10:5-11); these examples were written for our instruction (10:6, 11). That Paul highlights Israel’s sins such as sexual immorality and flirtation with idolatry (10:7-8) reinforces his specific application for the kinds of immorality taking place in the church in Corinth. He elsewhere makes specific analogies between the Israelites and the Corinthians (e.g., Ex 16: 18; 2 Cor 8:15); as God gave to the poor (Ps 112:9), he would also provide for the Corinthians if they gave sacrificially (2 Cor 9:9).

Given Paul’s mission, it is not surprising that many of Paul’s analogies concern the era of salvation he proclaims. Paul draws a natural analogy between the law of Moses and the gospel he preaches (Rom 10:6-8); both, after all, an: God’s word. Likewise the proclamation of Israel’s restoration is an analogy for the gospel message (Rom 10:15). Paul draws an analogy between the preservation of a remnant from the Assyrian judgment (Is 10:5, 21-24) with the ultimate restoration of the survivors of his people in the future (Rom 9:27-29). Likewise, by faith the righteous would live through the impending Chaldean invasion (Hab 2:4 in context); Paul applies the principle to the day of judgment (Rom 1: 17; Gal 3: 11). Perhaps for similar reasons, he applies imagery for Israel’s future salvation (Is 49:8) to the present offer of salvation through his gospel (2 Cor 6:2). Paul can draw a large-scale analogy between Moses and the apostolic ministry of the new covenant (2 Cor 3:6-16), in which Moses’ transforming revelation of the “Lord, in the Exodus narrative corresponds to believers’ transforming experience of the Spirit (2 Cor 3:17-18).

Paul would undoubtedly apply some of these analogies in more than one way, as needed to make the point. The righteous sufferer of Psalm 69:9 must apply to Jesus, the most righteous sufferer of all (Rom 15:3); but Jesus the righteous sufferer himself becomes the model for believers in Jesus (Rom 15:2). Paul applies the biblical requirement for separation from unholiness (2 Cor 6: 16-18), especially applicable to Israel’s original calling and its future return from among the nations (Lev 26:11-12; Is 52:11-12; cf. Is 43:6), to forsaking his accusers and being reconciled with him (2 Cor 6 :11-7:3); but one suspects that he could also apply the text in other ways. Paul specifically applies Hagar and Sarah to spiritual Ishmaelites (the Judaizers) and spiritual descendants of Abraham in Galatians 4:22-31, but these are hardly the only analogies one might draw from these biblical characters, for Sarah elsewhere can provide a model both for Christian wives (1 Pet 3:6) and for all believers (Heb 11:11).

Some of Paul’s analogies may be particularly relevant for his argument in 1 Timothy 2. He can apply the image of Adam and Eve in Genesis widely: The joining involved in the act of marriage (Gen 2:24) applies to one’s sexual union with a prostitute (l Cor 6: 16). But the union of Adam and Eve in Genesis 2:24 also provides an analogy for the union of Christ and the church in Ephesians 5:31-32.

The two most relevant comparisons for 1 Timothy 2, however, are in 2 Corinthians 11:3 and 1 Corinthians 11:8-9. Paul draws an analogy between Eve and the Corinthian Christians in 2 Corinthians 11:3; the basis for the comparison is that both were easily deceived. This may suggest that he would apply the image to anyone e.1Sily deceived, including most of the women in the Ephesian church, but would not always make this analogy on the basis of gender. Secondly, the creation order argument applied to women’s silence in 1 Timothy 2 is precisely one of the arguments he employs in 1 Corinthians 11:8-9 to admonish wives to cover their heads in church. But one cannot consistently require a transcultural application of l Timothy 2:11-12 without likewise requiring all married women to cover their heads in keeping with 1 Corinthians 11:2-16 (which he in fact argues at much greater length).

Some of Paul’s analogies are closer to the original sense of the texts that he cites than are others. Analogies that are more distant from the original sense of the text he cites should not be pressed beyond their immediate application, and sometimes we can recognize that Paul himself would not wish us to press his analogies beyond the immediate service to which he puts them.

In Hosea, Israel was rejected then restored (Hos 1:10); perhaps because Paul believes the conversion of the Gentiles will provoke Israel to repentance (Rom 11:13-14), Paul applies this text to the salvation of the Gentiles (Rom 9:25-26). Creation’s proclamation in Psalm 19:4 parallels the gospel proclamation in Romans 10:18. The incomprehensible language of the Assyrian invaders was a divine message of judgment toward Israel after they had rejected his other attempts to get their attention (Is 28:11; cf. 33:19; Deut 28:49); Paul applies the incomprehensible nature of this language to speaking in tongues (1 Cor 14:21), perhaps because it also functions as a warning to those who believe not (14:22). Speaking according to what one believes in the primary analogy between Psalm 116:10 and 2 Corinthians 4:13.

Paul may sometimes throw opposing positions’ proof texts back in their face. Though Paul claims that the law supports his teaching of justification by faith (e.g., Rom 3:31), he allows the opposing position’s method of justification by works based on Old Testament quotations (Rom 10:5; Gal 3:12)—yet he points out that no one’s works are adequate for that method to prove successful (Gal 3:10). Paul even quotes one of Job’s comforters to make a point (1 Cor 3:19), even though on the whole Job’s comforters’ specific application of their wisdom was wrongheaded (Job 42:8).

Like other Jewish teachers, Paul can rephrase a text. Psalm 68:18 speaks of a conqueror receiving gifts; because conquerors then normally distributed such plunder among their troops, Paul and some other Jewish traditions on this passage can apply it to distributing gifts, and Paul applies it to the ascended Jesus giving ministers to his church (Eph 4:8). When Paul wants to, he can argue that “seed” is singular and must refer to Christ (Gal 3:16), even though Paul knows very well that it can refer to “descendants” in the plural and so uses it elsewhere (Gal 3:29; Rom 4:13, 16, 18; 9:7-8; 11: 1). In the polemical context of Galatians 3:16, he employs a standard interpretative technique of his contemporaries: Interpret the text the way you need to in order to make your point.2

Those who wish to maintain, on the basis of Paul’s allusion to Genesis in 1 Timothy 2:13-15, that 1 Timothy 2:11-12 is necessarily a transcultural principle, need to reread Paul’s other letters. To be sure, Paul often uses Scripture with a universal import. But often he makes analogies to argue points he intends only for a specific situation. Given Paul’s support of women’s ministry in other passages, it seems difficult to assume that he means his biblical allusion any more universally here.