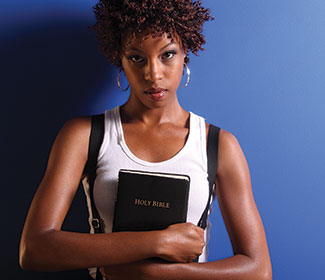 Case in point: I’ve recently been jumping at opportunities to write, and was happy to hear my devotional on Hannah would be published in a Bible for military teens! When it finally came out and I opened my complimentary copy, my heart fell. It fell hard. The translation was ESV. Now my name is associated with the gender-inaccurate ESV. I should have asked what version would be used, but in my excitement, I blew past that question and ended up with my devotional in a place I’d rather it not be.

Men comprise an overwhelming 84.5% of military personnel according to the 2015 demographics report. This male-dominated life makes it possibly even more important for military teens to read materials that depict female contributions accurately. But, alas, the ESV minimizes them.

Consider Phoebe, the one who would carry Paul’s letter to Rome. He commends her to them in Romans 16:1–2. The ESV calls her a “servant” and footnotes that “servant” may also be translated “deaconess.” Now, a brief study of Greek would reveal that this word diakonos may be translated either “deacon” or “servant.” In cases such as these, translators have to decide what biblical writers really mean by looking at the context.

Phoebe is from the church at Cenchreae, a city very close to Corinth. Paul states that she is his benefactor, that she helped him greatly. Whether this help was financial, spiritual, physical, or other, we do not know. It may have been a combination of all of them. She is traveling, possibly alone, probably with her own servants. Few women would have this privilege, and Paul tells the Romans to help her with whatever she needs. This letter of Paul’s is meant to make an alliance with the church in Rome so that they would send him to Spain. It is an important letter, and he entrusts it to Phoebe.

A person who helps Paul (possibly in many ways), has the means to travel alone or with servants, should be helped with anything needed, and is entrusted with a very important letter, is likely a leader in the church at Cenchreae. It is more likely that Phoebe is a deacon than a servant. She may well have been the primary leader of the church there.

It is intentional that I call Phoebe “deacon” rather than a deaconess. In many churches, deacons deal with ministerial matters like the distribution of money, while deaconesses decorate and cook. Far be it from me to denigrate decorating and cooking—we Christians are sometimes held together because we eat together! Yet, unfortunately, in my experience, these were a woman’s only permissible work, for women shouldn’t be involved in important matters like money.

In the Bible, however, there is no distinction between male and female in the role of deacon. In fact, the word that describes the office is one word “deacon” (diakonos) whether the person filling the office was male or female. Further, it is easy to find precedent for female deacons in the first centuries of the church. Therefore, Phoebe was a deacon (leader) in the church at Cenchreae. Calling her a servant or even a deaconess minimizes her role.

There is another woman footnoted in the ESV in Romans 16. Her name is Junia, and the ESV footnotes her name with a male name, Junias. The ESV thus thinks Paul’s referring to a female, but leaves maleness possible. Romans 16:7 in the NIV states, “Greet Andronicus and Junia, my fellow Jews who have been in prison with me. They are outstanding among the apostles, and they were in Christ before I was.”

For most of us, unfamiliar names like Andronicus cause us to stumble, distracting us from the beautiful truths contained in Paul’s descriptions. Andronicus is a male name and Junia is female. Some think they were married, but we are unsure. They’ve been imprisoned with Paul, but the most amazing truth about them is in the second sentence: “They are outstanding among the apostles”! Junia was an apostle and so was Andronicus!

Apostleship is defined differently these days. For some traditions, the apostles were limited to the twelve closest to Jesus; for some, apostles are those who saw the risen Christ; while for others, apostleship is a spiritual gift that continues today. What is clear is that apostles have authority and are sent (Greek apostello) by God to perform certain tasks. It has been common to state that women cannot be apostles. This was easier when Junia was incorrectly translated as Junias, a male.

While the ESV acknowledges that Junia is a better translation, it does not acknowledge her apostleship. Rather than being outstanding apostles, the ESV states, “They are well known to the apostles,” thus minimizing the contribution of both Junia and Andronicus. For ESV translators, it does not matter that the older KJV sees them “of note among the apostles,” that fourth century John Chrysostom (and others) saw Junia as an apostle, and that the very first to know the gospel and be sent (apostello) by Jesus to tell it were the women who came to the tomb. The translators’ bias against women in such a role causes them to minimize Junia and, by inference, other women in the Bible.

Did you know that the women and Mary the mother of Jesus were praying in unity with the male disciples in the upper room in Acts (Acts 1:13–14)? Both women and men were present to pray and cast lots for Matthias as well as to receive the blessing of the Holy Spirit on Pentecost. Iconography shows Mary with the Twelve, but there were actually about 120 men and women present (Acts 1:15).

Thus, when the Greek adelphoi is translated, “brothers and sisters” (Acts 1:16, NIV), it more accurately depicts the scene than the ESV translation “brothers.” Peter is, in fact, addressing both men and women and asking them to make a decision together. In many places in the book of Acts as well as the epistles of Paul, the word adelphoi is used to refer to both men and women. To continue to translate it “brothers” minimizes the presence of women in the early church. Both women and men were present, and both fulfilled various leadership roles, including deacon and apostle.

It still irks me that my devotional is in a study Bible whose translation minimizes women. And not just the women in the Bible. It diminishes the importance of my work, because even as readers learn from Hannah, they don’t get a full picture of the ways God has used women over time. And it reinforces cultural beliefs that men should lead while women follow—beliefs that the Bible itself challenges!

I hope that the young military men and women who read my devotional will learn from Hannah’s example. Because the truth is, women have always been leaders and exemplars of the faith, and Scripture praises them for it. Let’s do all we can to make sure that one day, every Bible translation celebrates that reality.

This article appeared in the print version of Mutuality as “Don’t Minimize Us!: How Bible Translation Shapes Our View of Women in God’s Story.”

PrevPrevious4 Ways Complementarian Churches Can Be Better for Women
NextTranslation Troubles: 1 Corinthians 14 as a Test CaseNext