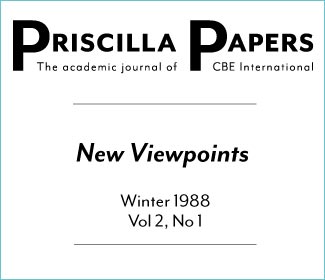 Currently, the debate surrounding women’s role in church and home in conservative circles focuses on the issue of headship. The Evangelical Thelogical Society in 1986 devoted its plenary sessions to a discussion of this topic. Because each side debated the meaning of kephale, the Greek work for head, by quoting their favorite lexicons in an attempt to bolster their position, Aida Besancon Spencer referred to this meeting as “the battle of the lexicons.”

Many opponents of women’s equality attribute the current agitation for women’s rights in the church and home to the secular women’s movement that resurfaced in the 1960’s. They charge that any arguments for equality reflect the influence of this movement. However, a biblical defense of women’s ordination and the equality of women and men is not new. Leaders in the Holiness Movement which emerged in the United States during the nineteenth century are among those who articulated a hermeneutic which affirmed both women clergy and equality.

While John Wesley, the founder of Methodism, formulated holiness doctrine, Phoebe Palmer redefined it and served as the mother of the Holiness Movement in the United States. The Nazarenes and the Church of God (Anderson) are among the larger groups which emerged from this movement. The doctrine of holiness or sanctification is the belief in a second distinct work of grace which follows conversion. One attains Christian perfection through the work of the Holy Spirit in the experience of sanctification. Because of their emphasis on the work and gifts of the Holy Spirit, most holiness adherents affirmed women preachers at a time when the majority of churches refused women the right to speak in public.

This article will examine briefly the views of headship expressed by three leaders in the early Holiness Movement: Alma White, founder of Pillar of Fire, B. T. Roberts, a founder of the Free Methodist Church, and William G. Godbey, a prominent Holiness evangelist. They claimed that the doctrine of headship or submission was irrelevant in arguments opposing women’s ordination and limited the discussion of headship to relationships within marriage.

If one relied on isolated statements by White or Godbey, there would be no question about their belief in headship within marriage. White stated unequivocally: “There can be no organization without a head, and the head of the home is the husband.” (1) Godbey described his understanding of the marriage relationship: “So our Lord has been very good to organize the family on a solid foundation. It must have a head or it could have no organization. Man is that head.” (2)

Notwithstanding their affirmative declarations regarding headship, Godbey and White limited wifely submission drastically by granting women freedom from their husband’s authority in spiritual matters. Relying on the Scripture “We ought to obey God rather than man” (Acts 5:29 – KJV), they contended that God could nullify a husband’s headship. White illustrated this qualification forcefully when she refused to obey her husband’s orders to stop preaching. Her relationship with her husband dramatized the contradiction between her professed viewpoint on headship and her actions.

It is very wicked in either party to interfere with the religious privileges of the other. A staunch member of a Methodist church who had no salvation, forbade his wife to attend the Holiness revival service, though in the church where he held his membership. She asked the evangelist what do do in the case. He said, “Go home, take down your Bible and read to him the first commandment, ‘Thou shalt have no other gods beside me;’ and say to him, ‘Sir, I married you for a husband and not for a god, as that place was supplied before I became acquainted with you. Now if you are content to be my husband, all right, but if you are going to be my god you can just trot out…’” (4)

The woman followed the evangelist’s advice, her husband admitted his error and attended the meeting with his wife. This story illustrates the extent to which Holiness leaders diminished the doctrine of headship.

White introduced her interpretation of I Timothy 2:8-12, a passage often quoted to support headship, by claiming a wife should be subordinate to her husband only if he was sanctified. Yet, she concluded her discussion with the observation that “the curse of subordination is removed in a sanctified home. While the man is the recognised head, both the husband and wife enjoy equality as it was intended they should before the curse fell upon the human race.” (5) A marriage characterized by equality, in which subordination was absent, leaves little room for the doctrine of headship; yet Alma still spoke of the husband as the head which, in this context, is a mere token title. Harriet McCormick, a Pillar of Fire member, contends that White was ahead of her time by advocating a 50-50 relationship within marriage. (6)

William Godbey’s disclosure of his marriage relationship reveals another instance where reality contradicted a stated view of headship. In My Better Half, Godbey described the status of his wife in their marriage:

When she entered into wedlock, recognizing the Scripture leadership of her husband, she made it a rule to consult me about everything she bought for her own use. I said to her, “Emma, you are my Better Half and not my servant, having sense of your own for the discrimination of everything appertaining to domestic life. Therefore do not consult me any more but walk in your own light and be free as if you had no husband.” (7)

Godbey’s advice to his wife appears to abolish headship altogether in their marriage. Mrs. Godbey supervised domestic matters independently, as if she were single. Godbey admitted that Emma managed their domestic matters better than he could. (8) Their marriage hardly provided a model of headship in practice.

B.T. Roberts went beyond White and Godbey by explicity denying headship in any form. He developed two arguments to support his position. First, Christ said nothing about the subjection of women — not one word.” If society required headship, as the supporters of headship argued, then Christ would have provided appropriate instructions. Roberts continued, “The greatest domestic happiness always exists where the husband and wife live together on terms of equality.” (9) In Christ, the egalitarian relationship established between the first couple in Paradise (Genesis 1:28) is restored. Second, Roberts compared marriage with the business world. If two business associates can work together as partners, considering each other as equals, surely a man and a women can live together in marriage as equal partners. (10) Roberts refused to sanction any version of headship and disallowed even a token recognition of the doctrine.

The perspective on headship within the Holiness Movement was heterogeneous. I’ve focused on three leaders who challenged the doctrine in various ways. Alma White and William Godbey limited headship by claiming the wife was directly responsible to God rather than her husband in spiritual matters. They reveal in their autobiographical accounts the extent to which the doctrine of headship was actually practised in their respective homes. Their marriages did not model headship in the home; the reality did not match the rhetoric. While White and Godbey proclaimed a diluted doctrine of headship, B.T. Roberts decried headship in any form. Each person mounted a substantial challenge to the doctrine of wifely submission by advocating equality in the home and encouraging women to utilize fully their gifts in the church. These perspectives should inform current discussions on headship which frequently overlook the Holiness Movement’s support of women’s equality in church and home.

PrevPreviousWho are the Women in 1 Timothy 2:1-15 (Part 1)
NextThe Role of Women in the Church, in Society and in the HomeNext