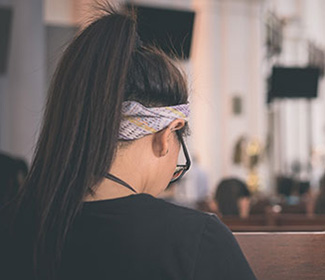 Hey Church, We Need to Talk About Consent

Editor’s Note: This is one of our Top 20 winners from the 2018 CBE Writing Contest!

The few men who have kissed me did not ask my permission first. They didn’t ask if I wanted their tongues in my mouth, or about any of the other things they’ve tried either. It seems this is the standard today—even among Christians. We wait until someone objects instead of truly gaining someone’s consent before proceeding. As “unsexy” as the topic of consent may seem, it’s something we need to talk about in the church. I’ll personally take an awkward conversation about consent over the alternative any day.

I’ve gone home in tears more than once after a date made a move on me without asking. I’ve said “no” repeatedly, and physically stopped guys’ hands. It’s happened over and over again as they continue to try to push me further than I want to go. Most recently, I stopped a guy from kissing me to have an awkward conversation about physical boundaries, only to drive home crying after he spent the rest of the evening “lightheartedly” pushing the boundaries he agreed to respect.

Why didn’t I storm off? I’ve never been aggressively assaulted. My experiences seem lighthearted compared to what others have faced. When I ask men to stop, they do. They smile, and hold me, and make silly jokes about how desirable I am. And as soon as I feel safe and relieved, they try the same thing again. In the moment, I’m frozen and confused. After I leave, waves of feeling violated and ashamed wash over me.

The #MeToo and #ChurchToo movements forced us to wrestle with what sexual consent means beyond the scope of violent assault. Consent is not the absence of “no.” Consent, by definition, is the presence of “yes.” Taking money out of someone’s wallet is still theft even if no one is telling you to stop. Likewise, we can violate others even if they don’t explicitly say “no.” We need to reclaim a high level of respect for people’s bodies and autonomy, remembering that sexual acts affect us on a deep level (1 Corinthians 6:16-20).

Psychologically, there’s so much at play in these situations. It isn’t always as easy as “yes is yes” and “no is no.” There are distorted power dynamics at play, stemming from things like age, race, social status, and gender.[1] In our culture, women are socially conditioned to be submissive, and often have to actively learn to confidently say no.[2] Then there’s “will power depletion,” the physical toll on the mind when repeatedly tempted.[3] Not to mention that a person shouldn’t be put in the position of having to say “no” more than once.

What This Means for the Dating Christian

“Do nothing from selfish ambition or conceit, but in humility count others more significant than yourselves. Let each of you look not only to his own interests, but also to the interests of others.” (Philippians 2:3-4).

What do these cultural realities mean for Christians seeking to honor God and other people in all we do, including our sexuality?

We know that we are called to a different standard—to not even lust after one another (Matthew 5:28) and certainly not to violate each other’s bodies. Because so many people fail to actually obtain consent, I’ve learned it’s crucial to determine your boundaries and discuss them with a date—and quickly. I’ve dated Christians who anticipate having sex within the first week of dating and have been stung by their unwanted advances. I’ve finally realized that if a man seems to not respect my boundaries—no matter how non-threatening he is or how trustworthy he seems—I need to remove myself from that situation immediately.

While this issue affects all people, it’s no secret that women’s boundaries are more often disrespected by men than the other way around. People seem to think that it’s up to women to fight for their boundaries. It is up to us to say “no” and draw lines, and we’re often questioned and blamed when we don’t fight “hard enough.” And purity culture often places extra responsibility on women’s shoulders, assuming that men are more sexual and less in control of themselves than women.

Christian men, you have the opportunity to change this narrative. You can be someone who makes a woman feel safe and respected instead of on guard. This means listening to the experiences of women around you and acknowledging the complicated psychological factors and power dynamics at play when you are alone with a woman. This means seeking to respect women’s boundaries and autonomy as much as possible, not seeing what you can get away with.

Of course, this issue affects all people and relationships. Men and women alike should seek to understand each other’s physical boundaries before initiating any physical contact. We can never assume consent based on social norms, perceived physical cues, or the absence of “no.” The consent conversation is an ongoing one, since deciding one’s personal boundaries is a learning process. What happened previously may not happen again and what was okay yesterday may not be okay today. It’s our responsibility to never leave others feeling violated or uncomfortable, but rather safe, valuable, and respected. This is one small yet extremely powerful way we can embody God’s love and care of others.

What This Means for the Church

The church is notorious for minimizing (or ignoring altogether) issues of consent and sexuality.[7] We’ve joined and sometimes led the chorus of indifference or victim blaming. In doing so, we’ve failed to acknowledge the murkiness surrounding sexual consent, handing down judgments instead of grace and compassion.[8]

We need to open our ears and hearts to the pain and confusion around us, to believers and nonbelievers alike navigating the issues of sexual assault and consent. People in the church are struggling. Women are constantly on guard as they attempt to date, never sure what a man will try to do to her or when she may be in danger. There are people in your classes, your workplace, your gyms, and in your congregations who are hurting and ashamed because they have been pushed further than they wanted to go. Some have been harassed and others were abused or assaulted. Many only find further shame and heartache when they turn to the church.

As the light of the world, we should be leading the way—a voice of compassion and hope in this conversation. Where others question and seek to blame, we can listen and offer empathy. Where others turn a cold shoulder to a problem that hasn’t caused them pain, we can learn and take a stand. We can acknowledge inequality, advocate for the vulnerable, and call for better standards. As disciples of Jesus’ justice, we should be leading the way in teaching and embodying safe, respectful sexual practices, giving all a voice and agency to care for the bodies God has given us.

Whether we’re listening to the person who was assaulted or someone who was pressured to go further than he or she wanted to go, we should remember this truth: “Only the church can speak of God’s unconditional love, unfailing grace, and power to restore the fallen and heal the broken.”[9] This is the example Christ has left us. May we go and do likewise.

PrevPreviousAm I Sleeping with the Enemy?: Males and Females in the Image of God
NextWhy Are We Teaching Girls to Hate Their Bodies?Next