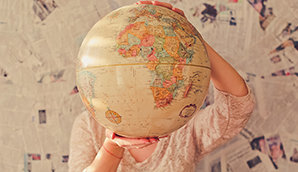 A Global Fight for Egalitarianism and Holistic Justice

This is the third installment in CBE’s celebratory series: Women’s History Wednesday. In our first installment, Rachel Asproth explored four strategies that patriarchal history has used to erase women. In our second installment and in our upcoming installments, Sarah Rodriguez, a former CBE intern, will profile three subversive egalitarian women who bucked gender expectations to make history.

In shining a light on these women’s stories, we will defy patriarchy’s attempts to marginalize the historical contributions of women. Instead, we will unashamedly celebrate their courage and persistence.

Last week, we told the inspiring story of Shannon Lucid, a woman who persevered against the prevailing biases of her day in order to become part of the first class of NASA astronauts that included women. This week, we will focus on the life and achievements of Dr. Jo Anne Lyon, the first female general superintendent of the Wesleyan Church.

Jo Anne Lyon was raised in a parsonage as the daughter of two ordained ministers. She knew about God from an early age. Nevertheless, she said, “I knew that God had children, not grandchildren.”[1] She recognized the fact that the journey of faith was hers, and only hers, to make, so in her early 20s, Jo Anne gave her life to the Lord.

When I asked what prompted her to make a spiritual commitment, she replied, “I had a real hunger in my heart for God. I knew that I couldn’t just do works, and that I was in real need of the power of the Holy Spirit.”[2] As a young woman, Jo Anne took her first true steps into the Christian life. Ever since, she has been impacting the lives of Christians all over the world.

Jo Anne has been a strong advocate of egalitarianism throughout her life. Jo Anne’s mother was an ordained minister, so Jo Anne knew that women were fully capable of serving as leaders in the church. During our interview, she stated, “I have always been passionate about the role of women in church and in church leadership.”[3]

Her friend Catherine Clark Kroeger saw Jo Anne’s passion for egalitarianism and approached her with a proposition: “She said to me, ‘You know, there are women out there who have gifts that are being wasted. They need to hear this message.’” Jo Anne agreed with Catherine and become one of the founding members of CBE International.

While we were discussing her involvement in CBE, I asked Jo Anne to name some female theologians or pastors who had inspired her. She named her friend Catherine Clark Kroeger and Christian author and theologian Mary Stewart Van Leeuwen. She also had another special message for CBE’s current president, Mimi Haddad: “Mimi Haddad is one of my heroes!”[4]

Just as many women have served as inspirations and heroes for Jo Anne, so she also has served as an inspiration for Christian women. In 2008, Jo Anne was elected to become the general superintendent of the Wesleyan Church. In serving in the highest position in the Wesleyan Church, she had to organize and lead all global and national Wesleyan churches, pastors, and board members.

I asked her whether or not the glass ceiling had effectively been broken down for women in the Wesleyan Church, and she replied emphatically, “Absolutely!”[5] She then informed me that 98 percent of women who are credentialed and ordained through the Wesleyan Church are employed. She recognizes the fact that her denomination can still make improvements, but she remains proud of the growth that has occurred in the Wesleyan Church.

In addition to serving CBE International and the Wesleyan Church, Jo Anne also founded World Hope International, a Christian relief and development organization that promotes social justice and caring for the holistic needs of people. Jo Anne told me about her inspiration for World Hope International: “I was part of a church that was doing overseas work, but they weren’t empowering people educationally or economically.”[6]

Jo Anne knew that people’s practical needs, physical and intellectual, must be met, and likewise, their spiritual needs. This was the foundation upon which she built World Hope International. The organization oversees the development of a number of programs, including anti-trafficking programs and organizations that advocate for women’s rights. Through the efforts of World Hope International, many countries have seen great economic, educational, and medical developments.

In fact, Jo Anne proudly told me that the State Department of the United States has verified that the efforts of organizations like World Hope International have caused human trafficking in Sierra Leone to decrease. Jo Anne’s organization has helped to create positive changes in communities around the world.

In June, 2016, Jo Anne decided to retire from the position of general superintendent of the Wesleyan Church. However, she is still keeps herself busy. Currently, she is the interim president at Wesley Seminary at Indiana Wesley University, the largest university in the Council for Christian Colleges. As the interim president, she works on creating partnerships and developing resources for the seminary throughout the world. She also continues advocating for women’s leadership positions in the church.

I asked her how she would like to serve as an inspiration for other women, and she replied, “I want to continue being all that I can be. I want women to discover and exercise their gifts. Many women are gifted, but they haven’t been given a chance, so I want women to holler forth with their gifts.”[7] If anyone proves the fact that women are spiritually gifted, it is Dr. Jo Anne Lyon, who has dedicated her life to helping the minds, souls, and bodies of people all throughout the world.

PrevPreviousBecoming His Story: Inspiring Women to Leadership
NextHow Men Can Avoid Learning From Women: A SatireNext