In a fantastic Her.meneutics article, the ever astute Rachel Marie Stone explores the question of why her sons, despite being brought up by an egalitarian mom, display certain stereotypically (for lack of a better word) boyish proclivities. She writes:

As an egalitarian mom, I have to admit I beamed with pride during the short times when my sons loved baby dolls or favored the color pink.

Then, when they were big enough to play together, I found my boys tying dolls to stakes, or trapping and jailing them as if they were enemy combatants. I never saw them use a doll as a weapon. But their hobbyhorses and plenty of other objects were turned into rifles and swords for play fighting. There goes my attempt to raise pacifist, nurturing sons, I thought as they grew to embody many boy stereotypes.

The complementarian or heirarchicalist would look at this, and say, “Aha! See! I told you—boys are wired to be violent little warlords who like to Get Rid of Slimy girlS and rule the world!”

The mutualist or egalitarian might look at this and say, “Come on, Rachel! How can you let this happen in an egalitarian household! Are you sure your husband isn’t secretly watching UFC at home and letting your boys watch along?”

Comic responses aside, Stone’s article points to something many parents have questions about—how is my boy or girl wired?

Fortunately for those seeking answers, this is a question that has become somewhat of an obsession for many scientists who study the brain within a subspecialty of neuroscience called the neuroscience of sex differences. Neuroscientists who address this question try to understand what and how much a person’s biological sex can tell us about their brain and vice-versa.

Now you might be thinking—well, if these neuroscientists are working to just understand why a boy is different or similar to a girl, isn’t that a waste of taxpayer money—just to satisfy a curiosity?

The answer to this is no. The neuroscience of sex differences is not a wasted pursuit and is clearly not just aimed to quench scientific curiosity. The data clearly shows us that there is a medical benefit to determining these differences.

For example, we now know that five times as many boys are diagnosed with autism spectrum disorder (ASD) than girls of the same age.[1] Another brain condition, Major depressive disorder (MDD) is almost twice as likely to be diagnosed in females as males.[2] Importantly, many such neuropsychiatric conditions are found to be sex-biased across different countries around the world, indicating a biological basis as opposed to a purely cultural one. Thus, investigating the ways in which male and female brains are different or similar can have concrete effects on how we treat brain disorders.

In fact, when neuroscientists conduct experiments using animals as models of human biology, many researchers have either completely ignored potential differences between the sexes or actively avoided using female animals, citing the number one reason for doing so: those pesky female hormones supposedly mess up interpretations of experimental results.

This has resulted in a massive male bias in neuroscience research which could have negative consequences in understanding sex differences in neurological disease processes. To combat this bias, the biggest American biomedical grant funding agency—the National Institutes of Health (NIH) has recently mandated that NIH-funded research groups report the sexes of animals used in experiments along with any associated differences or similarities.[3]

“In the end, my response is that sex differences in the brain are more than some would like and less than others believe.”[4]

Thinking well about the question of what makes males and females different is especially important in the context of theology and specifically ecclesiology. Arguments over who meets the criteria of a capable church leader often go beyond Scripture into the territory of what makes a male brain innately different from a female brain. And how this supposed difference is proof of the male brain being “wired” to lead, and a female brain “wired” to be submissive. Proponents of the “men-are-wired-to-lead” view often use non-scientific folk psychology to draw conclusions regarding human biology and behavior, without much regard to actual data and research.

So, what’s the story about these sex differences that neuroscientists break their recording electrodes over?

Like all good stories, this one starts right at the beginning—the genesis of the fetal brain.

Over much of church history, women have been effectively considered secondary to men. Prominent figures such as St. Augustine and Martin Luther viewed women as being inferior to men. One reason for this was because of the way church leaders have historically understood Eve as being the female representative of humanity. They viewed Eve as less rational than Adam. Hence the thinking that women are less rational than men.

But also importantly in the context of heirarchicalism, another reason for this line of thought is the Genesis creation account of Adam being created first—that the male template is primary—the norm—spiritually, as well as physically. The female is thus a derivative and a deviant of the original male template.[5]

If only Augustine and Luther were alive today, it would probably blow their mind to know that during fetal growth, the default starting template for brain development is a female one!

Only when factors such as steroids are generated by the testis, does the original female brain template become masculinized. In this sense, the “male” brain is a derivative of the “female” brain. This is because the fetal pre-gonad, by default, would develop into an ovary. Development of the testis is dependent on a gene called Sry that is found on the Y chromosome. As development progresses, masculinizing factors lead to certain anatomical and cellular differences observed in specific brain regions.

Among organisms that have two sexes, characteristics that are different between those sexes are termed sexually dimorphic. Sexual dimorphism is observed across different regions of the mammalian brain. One small brain region in particular is significantly different between the sexes—the preoptic area (POA).

Male sexual behavior is critically dependent on the POA (see figure) so much so that artificially activating key molecules in cells within this region in newborn female mice causes them to display stereotypical male sexual behaviors when they become adults.[6] Data shows us that neurons residing in the POA have connection-points or synapses that are twice as dense in male mice compared with female mice at all stages of brain development after birth.

This difference in density of synapses is thought to be important in determining the onset of male copulatory behavior in adults. The POA is also important in regulating maternal behavior in females. When a different class of important neurons are killed off in the POA of mothers, these mice show a dramatic decrease in maternal care and instead become aggressive towards their pups—something that almost never happens in normal maternal behavior.[7] Interestingly, ablating this same class of neurons in fathers caused a reduction in paternal care as well, suggesting a sexually neutral circuit for parental care within the POA. 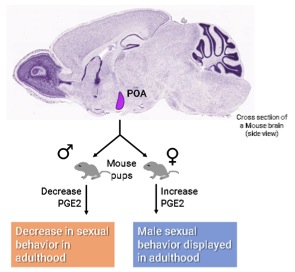 Sexual Dimorphism in the Preoptic Area (POA): The POA (highlighted in magenta) is critical for male sexual behavior. Artificially decreasing levels of a key molecule called PGE2 in newborn male pups can cause a decrease in sexual behavior as adults. Strikingly, artificially increasing levels of PGE2 in newborn female pups can cause them to display male sex behavior as adults.[6] [Picture of brain cross-section obtained from the Allen Brain Atlas]

And related to Stone’s observation regarding “boy stereotypes,” the amygdala is important for initiating rough-and-tumble play in young animals—a form of social interaction between peers. Not so surprisingly, the amygdala is on-average larger in human males than in females.[8] However, something that cannot be emphasized enough in interpreting such studies is that averages are not predictive of an individual brain.

The Brain as a Patchwork Quilt

I recently came across an article titled, “Men are like Waffles, Women are like Spaghetti.” Just reading that title made me roll my eyes so far back into my skull, that I almost blacked out.

Basically, the article is a collection of pseudoscientific tidbits regarding how brains function differently in males and females. This brings me to my most important point—there are no uniformly “male” or “female” brains. There are just brains.

These “just brains” may be more masculinized in some regions and more feminized in others. On average, some regions may be more masculinized in males and more feminized in females. However, “maleness” and “femaleness” is not something that can be attributed to the brain as a whole. The brain is therefore not a “Waffle” or “Spaghetti,” but a patchwork quilt or a mosaic.

Patchwork quilts are not made out of a single element that comes either in pink or blue, neither does it come as a pink-blue gradient. Rather, a patchwork quilt consists of multiple different elements often disparate in color and pattern.

And two quilts made by the same manufacturer may have certain elements with a darker color or a stronger pattern, but most of the disparate elements will be similar. The same is true of brains. While certain sexually dimorphic regions do exist across the brain, the majority of the brain structures do not show any consistent differences between the sexes. Therefore, suggesting that males and females have totally different brains and so should have different roles within the church is ludicrous.

The Brain and Biblical Equality

When I heard that Target stores had changed their policy to remove “Girl” and “Boy” signs from the toys section, I chuckled to myself, Wow—the world’s biggest sexual dimorphism experiment.

Rather than following the signs, now children will be free to choose which toys they want to play with. But there is one big confound in the experiment—societal pressure. Even though the signs are no more, parents will still pressure their girls to play with Barbie dolls and their sons to play with trucks. This will skew any interpretation of the experimental results. The pressure to conform to a certain stereotype changes the value of selecting a particular option and rejecting the other. The choice therefore isn’t really “free” to begin with.

In conclusion, I thought it would be fitting to quote one of my favorite New Testament scholars and writers, N. T. Wright, as he discusses 1 Timothy chapter 2:

The first verse (8) is clear: the men must give themselves to devout prayer, and must not follow the normal stereotypes of ‘male’ behavior: no anger or arguing. Then verses 9 and 10 follow, making the same point about the women. They must be set free from their stereotype, that of fussing all the time about hair-dos, jewelry, and fancy clothes – but they must be set free, not in order that they can be dowdy, unobtrusive little mice, but so that they can make a creative contribution to the wider society. The phrase ‘good works’ in verse 10 sounds pretty bland to us, but it’s one of the regular ways people used to refer to the social obligation to spend time and money on people less fortunate than oneself, to be a benefactor of the town through helping public works, the arts, and so on.

As Christians, we really need to think through things that make us look at “male” and “female” differently. And we need to do this keeping the scientific data in mind. While the Genesis account does bring out creational differences, this does not imply a change in our ontological equality. Neither does this lead to a default eligibility criteria for positions of church leadership. We simply cannot let external man-made societal pressures, or even our own biology stop us from fulfilling our Christian calling.

PrevPreviousThere’s Something About Mary
NextMockingjays and Unicorns: How The Hunger Games Is Changing Our Perception of Female LeadershipNext