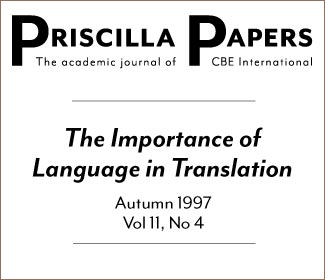 A Gender Matter: A Response to the Colorado Springs Guidelines

“This is not a gender matter, it’s a language matter.” Professor Jimmy Duke speaks for many in his comments on translations (Saint Paul Pioneer, June, 1997:4D). I beg to disagree. As a professor of New Testament who has served on several translation committees, and as a woman, I propose that the May 27 “Guidelines for Translation” released from Focus on the Family’s headquarters in Colorado Springs are solely “a gender matter.”

These guidelines do not appear to achieve accuracy nor do they represent a desire to spread the Good News. Rather, they are guidelines that reflect the prejudice of some men who want to hold on to a power that is not really theirs, sending bad news to women. The Bible is being misused as a weapon rather than a self-examining tool among sincere Christians, shoring up current cultural practice rather than flooding the church with the truth wherever it may lead.

The guidelines are clearly a gender matter in three ways: 1) They are of concern to both males and females; 2) They represent a misunderstanding of grammatical gender; 3) They are an attempt by some men, one gender, to hold on to power even if it should thwart the very good news they propose to advance.

Focus on the Family is a deeply respected organization in evangelical circles. However, stepping out of Focus’ realm of expertise and into biblical translation takes the focus off the family and leads to confusion.

For example, one guideline proposes that “ ‘Man’ should ordinarily be used to designate the human race or human beings in general.” This begs the question: Did God create “human beings” or “man” in his image? Genesis 1:27 itself clarifies this question: “male and female he created them.” The original Hebrew declares that God created “the adam,” but “adam” is a collective “they.” That is why “the human” would be the most literal translation, but “God created the human in his image” is not common English. Thus Odyssey’s New Century Version rendered “the adam” as “human beings.”

As a “dynamic equivalent” translation of the Bible, which communicates today’s equivalent of the author’s intention, the New International Version has given such renderings many times. The Church has overwhelmingly welcomed such equivalents. The NIV Committee on Bible Translation explains in its preface that it renders sabaoth and shaddai by one term, “Almighty,” even though the Hebrew really means “He who is sovereign over all the ‘hosts’ (powers) in heaven and on earth, especially over the ‘hosts’ (armies) of Israel” (NIV Study Bible 1985:xii).

Moreover, I have yet to find a version which literally renders Psalm 17:8a “Guard me as the pupil of the eye.” The NIV and NRSV both render the simile “apple of your eye.” “Apple” in no way is like “pupil” or “eyeball” (in the actual Hebrew), yet no one, as far as I know, has begun a major campaign complaining of inaccuracy! The translators have thought that “apple” best communicates the author’s intention for today’s readers. (Ultimately, every Christian who wants to dig deeper into the Word should learn ancient Greek and Hebrew and not be limited by others’ translations.)

Further, the Colorado Springs guidelines on Bible translation fail to be consistent within themselves. For example, what can we do with a passage such as 1 Timothy 2:5-6? The NIV now reads “For there is one God and one mediator between God and men, the man Christ Jesus, who gave himself as a ransom for all men (anthropoi).” According to the guidelines, rule A5, anthropoi can be rendered “people.” We could then revise the NIV to read “one mediator between God and people” and be within the guidelines. However, according to the same guidelines, rule A3, “human beings in general” should ordinarily be rendered by “man.” Why then if anthropoi can be rendered “people,” must we “ordinarily” render it “man”?

Furthermore, rendering the plural anthropoi as a singular (man) contradicts rule A2, “singulars are not to be changed to plurals” because “person and number should be retained in translation.” Is it unacceptable to change singulars to plurals, but acceptable to change plurals to singulars? And would we not better describe Christ Jesus as “the human” rather than “the man” because, by using anthropos, Paul wants to highlight that Jesus, as the mediator between God and humans, must represent females as well as males? But of course this move toward accuracy would mean contradicting rule A5, “the singular anthropos should ordinarily be translated ‘man’.” (Ironically, anthropos can even refer only to women, as in 1 Peter 3:4!)

A Misunderstanding of Grammatical Gender

What, exactly, is “grammatical gender”? Is it “natural gender,” as in sexuality? No, grammatical gender refers to “class” or “kind.” In Hebrew, a bereaved mother bear is described in the masculine gender (Hos 13:8). Sometimes the same reality can be described either in masculine or feminine gender categories (as I show in numerous examples in my book The Goddess Revival, pp. 122-125). The masculine noun diakonos refers to a female (Phoebe) while the Holy Spirit (pneuma), who is personal, takes a neuter article. “Teacher” (gohelet), a Hebrew feminine word, can refer to a man, Solomon (Eccl 1:1). The Greek word for “church” (ekklesia) is a feminine noun although it includes women and men (as in Philemon 2).

In contradiction to rule B1, adelphoi, although masculine in form, was intended by the original writers to include females, because it is used to include the women Lydia, Euodia, and Syntyche (Acts 16:40; Phil 4:1-2). Huioi, in contradiction to rule B2, was intended by the apostle Paul to include females as well as males (Gal 3:28, 4:6). Thus, the New International Reader’s Version is correct in rendering Galatians 4:6 “children.”

An Attempt to Usurp Power

Since Focus on the Family’s guidelines are neither accurate nor consistent, it appears that their stated goal is not necessarily their true goal. Why would they “seek the leading of the Holy Spirit” by inviting ten people to their meeting of “concerned” individuals, the majority of whom share the same position on the issue (aligned with the Council on Biblical Manhood and Womanhood)? Not one female Christian scholar was invited! To the most simpleminded observer, it appears more that a priori to the discussion, the winning agenda was one which enabled a certain type of men to “lord it over” others (Mark 10:42).

Further, how could some Christians have the breathtaking arrogance, not to mention the power, to demand other Christian organizations to publish only their point of view? Has the NIV remained free of “sectarian bias” as it originally desired? How could the creators of these guidelines be concerned about unity in evangelicalism, if they not only sought to suppress revision of the NIV for an American audience, but also sought to suppress publication of two existing inclusive-language versions of the NIV, even extending their meddling overseas by attempting to regulate the version being published in Europe?

Rendering the Bible accurately affects me and all women (over half of the church and the world). Being a woman in no way means that God has excluded me from God’s many blessings. Am I to be one of those to whom Paul would entrust all he said? Little girls who read The Adventures in Odyssey Bible might say, “Yes, Paul said, ‘You should teach the same thing to some people you can trust’ (2 Tim 2:2). I am a person, and I pray to God that I might become trustworthy.” Since the Greek has the plural of anthropos, according to rule A5, the Odyssey Bible is correct and the present NIV is incorrect with “commit these to faithful men.” Thus, if Focus on the Family was listening to the Bible rather than trying to dictate to the Bible, its leaders should have demanded that the NIV Committee revise their 1984 edition into their 1996 New International Reader’s Version: “Pass on to people you can trust the things you’ve heard me say.”

The original International Bible Society decision of May 14 was a fair one—to have an inclusive and an exclusive version, in the best spirit of evangelicalism, wherein, given adherence to the sole lordship of Jesus Christ, believers can differ on a variety of non-salvific topics like mode of baptism and nature of communion. The IBS should not have retreated from this position.

A Misuse of Resources

Focus on the Family proudly lists on its June 3, 1997, news release that in twenty years it has garnered 3-5 million radio listeners. Many parishioners in my own church have benefited from Focus’ broadcasts and materials. Its initial, denominationally-inclusive stance has been its strength.

But at the Colorado Springs gathering, Focus and Zondervan Publishers offered to reimburse any purchaser offended by inclusive language used in the Adventures in Odyssey Bible and the Kid’s Devotional Bible. If readers take them seriously, Focus and Zondervan could spend up to nine million dollars reimbursing customers, in addition to the thousands of dollars spent already on editing these versions (an amount that could keep over 400,000 children alive for a month).1 Instead of these dollars being spent to spread “light” and “truth” around the world, they will be used so that the female “people group” may hear that “all men” but not “all people” might believe! All this money and time will be expended so that not one more child should read “So God created human beings in his image” or that John “came to tell people about the Light. Through him all people could hear about the Light and believe.”

That the Church begins again to argue over “man” versus “people,” spending vast amounts of time and money to exclude references to half the world’s population, while millions of non-believing people stand dismayed and unimpressed with our misuse of resources, in my opinion shames the name of Christ.