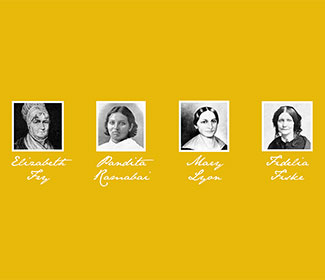 A Forum of Sensible Voices

C.S. Lewis once wrote that “the unhistorical are usually, without knowing it, enslaved to a fairly recent past.” The same might be said for the conclusion that evangelical egalitarianism is merely the child of the radical feminism of the 1960s and ’70s.

Guilt by alleged association is, without a doubt, a powerful tool; but in this case, such a conclusion is a textbook example of reductionism, or the oversimplification of history. It misses the historical precedent, one we might accurately call the evangelical roots of modern egalitarianism. Ignorance of these roots is an educational issue, and celebrating those forerunners is a potential remedy.

The story of civil rights violations — as well as the story of humans fighting to preserve those rights — is as old as history. But the nineteenth century in particular saw several developments that paved the way for great change. Early in the century, for example, there was a move for the fair treatment of the mentally ill. Men and women began to take notice of the rights of those who, for lack of a better plan, were locked away out of sight. Calls to treat these people as created in God’s image brought radical change in England.

In the area of gender, the suffrage movement called for the equal rights of women who were often treated as chattel. This new perspective on gender not only led to the right to vote, but also to more opportunities for itinerate female preachers and higher education for women. Evangelicals of the nineteenth century were by no means of one voice on these issues, but many were leading international voices for change.

A few of these evangelical pioneers in human rights are almost household names. Thanks to the recent movie Amazing Grace, many people have heard of William Wilberforce, William Pitt, and Olaudah Equiano, who led the charge to end the slave trade in Britain. And one would have to be locked away in a closet to have never heard of Sojourner Truth, an American former slave who converted to Christianity under Methodism and a brief period with the Millerites. Truth, as both a black abolitionist and a woman, called for the equal treatment of all people regardless of race or gender with one fell swoop in her famous 1851 speech, “Ain’t I a woman?” Yet there are those champions who, while making waves (and history) in their day, remain unfamiliar to many today.

One such champion in England was Elizabeth Fry (1780–1845), an evangelical reformer with Quaker convictions. Inequality on the basis of gender, race, economics, and mental health were apparent in many ways in England, and Fry found this to be particularly true for women prisoners. She was moved to get involved, and in a different way, so was her husband. Joseph Fry was a wealthy but struggling businessman, and an egalitarian by the standards of the day. He supported his wife’s causes by hiring servants to free her from what were considered her domestic concerns, enabling Elizabeth to devote significant time and energy to pursuing reform in areas such as abolitionism, legislation for the humane treatment of the mentally ill, and the end of the death penalty.

Fry’s most famous work began with her visit to the women’s ward of Newgate Prison in London. Many women were imprisoned without trial or justification; England at the time had about 200 offenses that called for execution, including theft and forgery. Some prison guards used the women’s ward as their own private brothel. Female prisoners gave birth and raised children within their cells and many existed in relative nakedness and poverty. No prison is paradise, but the severity of the women’s wing at Newgate offered ample evidence of inequity based on gender. Fry brought them food, clothing, and medicine, and — in a move for which she was most derided initially — she gave them an education. She set up a schoolroom for the women inmates and their children, donated textbooks, and made business contacts outside the prison to help them produce and sell textiles. She preached to them and taught them to read Scripture. And she convinced the authorities to hire a matron to oversee the women’s ward to help protect them from exploitation by male guards. Fry’s efforts helped bring lasting legal change for these prisoners, and served as a model for the fair treatment of other human beings around the world.

Likewise, in India, Pandita Ramabai (1858–1922) defied her culture with her egalitarian principles. She was born into a wealthy Brahmin family and her father, Anant, was a well-known and respected Sanskrit scholar and a teacher of sacred Hindu texts. Women were forbidden to study Sanskrit and the sacred texts, but Anant harbored different opinions and taught both to his wife and, later, his daughter. Anant eventually paid a price for his counter-cultural beliefs, losing his position and income and becoming ostracized from his community as a destroyer of the Indian family. After receiving a scholar’s education from her parents, Ramabai followed the path modeled by her father and continued to challenge the cultural norms, eventually marrying outside of her caste.

Ramabai took special interest in the treatment of young widows. In an inhumane practice called sati, widows were burned on funeral pyres with their deceased husbands. Those who avoided sati had few options, considering that remarriage was forbidden and widows were treated as cursed (including being forced to shave their heads). Given the large number of young women married to old men, this miserable life became the worst nightmare for many. Ramabai sought to improve their lives and remove that stigma through care and education, a decision that led her to study medicine in England in 1883. There she met up with Anglican evangelicals who demonstrated their religion through acts of mercy as she had tried in India. Her dissatisfaction with her own religion and the promise of justice Christ offered drove her conversion to Christianity. From her perspective, Christ’s willingness to lower himself and heal sinners identified him as the only solution for the ills of India and its caste system.

From India to England to the United States and back to India, Ramabai met likeminded individuals (Susan B. Anthony, Harriet Tubman, Emily Howland, etc.). She also met opposition, but left a lasting impression in her wake nevertheless. In Boston, she formed the Ramabai Association (1887); in India she formed the Sarada Sadan (1889), to serve as both a home and place of education for widowed women; and in 1900 she built the Mukti Mission. A prolific writer armed with an arsenal of languages, she put her knowledge of Greek and Hebrew to use by translating and publishing a new version of the Bible in the Marathi vernacular. For her work, she earned the reputation of being the “mother of modern India.”

During her trip to America (1886–1889), Ramabai was impressed with the growing suffrage movement, but found America’s treatment of slaves and Native Americans in need of serious reform. She was both encouraged and influenced by America (she later wrote a book about her travels there), yet women in the United States still struggled for their own rights.

Post-Revolutionary America had become a hotbed of rights discussions as feminist ideals — as well as the reactions to them — fell across the spectrum. In light of their role in educating the nation’s future senators, the young country gave greater weight to the education of women. This idea, now dubbed “Republican Motherhood,” focused on the woman’s place in the home and echoed what is sometimes viewed as the “traditional” gender role. However, it also provided for a new perspective on what women were capable of doing on a larger scale and opened up educational opportunities. Evangelical schools for women began to appear across the Northeast.

Indicative of this era was Mary Lyon (1797–1849), who founded Mount Holyoke Female Seminary (now Mount Holyoke College) in South Hadley, Massachusetts in 1837. Lyon, a school teacher by profession, taught at Sanderson Academy, Adams Female Seminary, and Ipswich Female Seminary. Gifted with a marvelous intellect and evangelical convictions, she opened her Mount Holyoke Seminary to the tune of eighty students, and by the next year had to turn away more than four hundred applicants.

The evangelical tradition of revivalist Jonathan Edwards and his students, known as the “New Divinity,” laid the theological foundation for Lyon’s students. Ever since the 1989 work of David Bebbington on evangelical origins, historians have recognized that the key characteristics of the evangelical movement in its earliest years included an emphasis on conversion, a commitment to the Bible, a focus on the cross, and activism; in other words, evangelicals emphasize the need for salvation, the source of our knowledge about salvation, the way of salvation, and the progress of the gospel of salvation. From its earliest years, evangelical activism took many forms, most often in missions, and, as the nineteenth century progressed, in social reform — the very hands of the gospel itself. For anyone, man or woman, to be an effective minister of the gospel, a proper education was foundational. Through her school, Lyon was able to connect her students to the field of international missions.

One Mount Holyoke student, Fidelia Fiske, remains a quintessential example of Lyon’s success. At the encouragement of a missionary, Reverend Justin Perkins — and contrary to what was then socially acceptable — Fiske went to modern day Iran as a single female missionary to build a school for girls. Appealing to fathers who saw no need for women to be educated, and who instead married off their daughters at very young ages or abandoned them on the streets when they could afford to feed only their sons, Fiske’s call was “Give me your daughters!” She housed them, fed them, nursed them, and educated them. The result was the transformation of the lives of numerous young Iranian girls, and an example for the society she had left back home in America.

Evangelical activism in the United States was also spurred by the powerful theology of John Wesley and the Methodists. Men and women of this tradition carried their message across the U.S. and throughout the world. Among these women was evangelist and holiness movement leader Phoebe Palmer (1839–1874), who acted according to her belief in Spirit baptism by traveling the globe, preaching the news of the gospel and calling the church to egalitarianism. Likewise, Amanda Berry Smith (1837–1915), an evangelist and a freed slave from York, Pennsylvania, found resistance to her work as a preacher from some men in her denomination, but persisted in ministering to people in America, England, India, and West Africa, and established a school for girls in her last years.

Whether rich or poor, black or white, male or female, free or slave, egalitarians of the nineteenth century called the world to answer for its oppression of those made in the image of God. These messengers of equality — coming from different theological backgrounds — demonstrate the rich history of evangelical egalitarianism, a history that crosses denominational lines and well pre-dates the American feminist movement of the 1960s and ’70s. Without an accurate understanding of this historical context, as Lewis wrote, the modern Christian church is “enslaved to a fairly recent past.”

Today’s evangelical egalitarians follow the trajectory set by those in the nineteenth century. Like those leaders of previous eras, they seek to define equality in a world that is hostile to that biblical ideal and yet full of eager souls ready to follow their call. Social and polemical barriers persist. And no human being is exempt from the influence of his or her culture. But when we properly view the historical context of forerunners like these, we discover a forum of sensible voices leading the way toward greater change.

PrevPreviousEditor’s Note: We are Pioneers for Jesus
NextThe Hunger Games and the Gender DebateNext