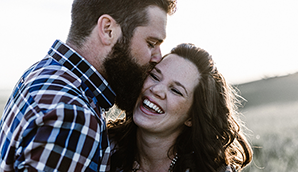 If you’ve spent any time in church (or studying the New Testament text), you’ve heard of the famous couple, Priscilla and Aquila.

Biblical narratives centered on co-laboring couples like Priscilla and Aquila have always excited me. Long before I met my husband, I envisioned a marriage of mutuality and shared ministry. Most of the marriages around me didn’t function that way. I was used to the Pinterest standard for ministry wives—dresses cute; does arts-and-crafts; bakes cookies from scratch; makes parenting look easy; and has dinner ready when the husband comes home hungry and tired from a day of ministry.

While I genuinely think that’s a beautiful reality for women who feel fulfilled by it, it just isn’t me or my reality. I’ve never done a serious Pinterest project or even thought much about having kids of my own. In fact, I dreamed I would be the person coming home hungry and tired from a day of ministry. I often felt deeply insecure because I couldn’t see myself in that standard. Was I not “wife-material”? Was I not cut out to be a “Proverbs 31 wife”?

I constantly worried about what marriage would look like for me. Was I not supposed to initiate Bible studies with my husband? Teach him what I’ve learned? Once I knew I was called to ministry, I wondered if it would be appropriate for me to pursue ministry if my future husband didn’t. On top of that, I am independent, opinionated, and assertive—qualities that are typically valued in men but not in women. I wondered: was I supposed to change my personality completely after marriage?

Things changed when I met my husband, Taylor. He didn’t care about me filling the traditional “wife role.” In fact, he liked the qualities that took me outside of “biblical womanhood.”

During one of our first conversations, we talked about all the things we both wanted to accomplish in our careers, in our education, in our spiritual growth, and in our ministries. The closer we got to each other (and to marriage), the more excited we both became about co-laboring in ministry, education, and life.

During this time, we both worked for a campus ministry organization in New Orleans. I worked almost fulltime with the ministry, leading women’s discipleship groups, among other things. Taylor volunteered fewer hours to lead the men’s groups. We both have a passion for teaching, so we team-taught lessons when the men and women gathered together. We thought nothing of it.

But during a team meeting one night, a coworker interrupted the meeting to ask: “Why does everyone say it like that?”

“Well, it should be Taylor and Kat.” He stressed Taylor’s name.

Huh? It took me a second. What in the world was the difference? Then it struck me that he was confused about why my name was said first! Both Taylor and I found his question strange and comical.

But I admit I found myself thinking about it the following few days. Why did this man care enough to ask such a silly question? I knew what he was implying: the husband is supposed to lead the relationship, so his name should come first, as should his ministry. But this man felt so strongly about roles and order in male-female relationships that he corrected us in the middle of a meeting. Was his concern biblical? Was co-ministry modeled by married couples in the Bible?

Naturally, I revisited my favorite biblical example of a co-laboring couple: Priscilla and Aquila.

Priscilla and Aquila were a married couple from Rome. We pick up their story in Acts 18 when Paul meets them as refugees in Corinth. They were forcibly displaced from their home by the edict of Claudius, which exiled Jewish people from Rome.

Corinth was smack-dab in the middle of some important trade routes, so it had a distinct economic and social culture. Workshops and guilds dominated the city’s economy, which set the stage for Priscilla and Aquila’s business partnership with Paul. In Acts 18, Luke (the author of Acts) makes it clear that all three of them (read: not just Aquila) practiced the same trade. It also makes clear that, aside from working with Priscilla and Aquila, Paul lived with them during his eighteen-month stay in Corinth. There’s no room for doubt that the couple’s involvement with Paul was vital to his ministry in Corinth.

Paul, Aquila, and Priscilla eventually left for Ephesus together. The couple stayed in Ephesus while Paul continued on his journey. Luke lingers on Priscilla and Aquila’s relationship with Apollos in Ephesus. Apollos was a well-educated Jew—eloquent and effective when he spoke. Apollos knew about Jesus, but we are told that he was only aware of the baptism of John. Luke tells us concerning this:

“When Priscilla and Aquila heard him, they received him into their circle of friends and explained to him God’s way more accurately” (emphasis mine).

Again, Luke is pretty clear about who taught Apollo the more accurate way—not just a man, but also a woman. And interestingly, Priscilla is listed first in this biblical text, which would have been highly unusual. Additionally, in four out of the six times that Priscilla and Aquila are mentioned in Scripture, Priscilla is named first. In ancient writings, the order in which names were written was significant. So, not only was Priscilla a co-laborer with her husband, but the order of their names in the text could indicate that she was the more distinguished among the two and deserving of high praise.

We also know that this co-laboring ministry couple made a tremendous difference in advancing the gospel. Paul addresses them twice more in his letters. It’s especially significant that he names them in his letter to the Romans: “Say hello to Priscilla and Aquila, my coworkers in Christ Jesus, who risked their own necks for my life. I’m not the only one who thanks God for them, but all the churches of the Gentiles do the same. Also say hello to the church that meets in their house” (emphasis mine).

In the first century, leaders of house churches functioned as pastors and teachers. Paul does not indicate any gender hierarchy when he addresses the couple. We have no reason to believe that Paul saw Aquila as overseeing and legitimizing Priscilla’s ministry or teaching. Rather, he indicates that Priscilla and Aquila both led the church equally; they both risked their lives for Paul; and they were both coworkers with him in ministry.

Some leading Christians argue that women should not teach and particularly should not teach men. But here, we have a biblical example of a woman instructing a man, and not only that, but a couple co-laboring as equals in their ministry. Priscilla and Aquila modeled co-ministry and mutuality in marriage. Scripture shows them instructing others in the way of God and appears to specially honor Priscilla by naming her first.

So, it doesn’t really matter whether we’re called “Kat and Taylor” or “Taylor and Kat.” What matters is that we’re choosing to live as mutual partners and co-laborers for the gospel. And, luckily, we can look to our favorite co-laboring Bible couple, Priscilla and Aquila, to explain the way of marriage more accurately.