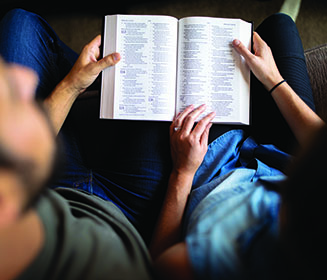 Early in his writings, Paul authored Galatians, a book primarily dedicated to explaining to Jewish Christians that their uncircumcised Gentile brothers were not second class members of the church. Paul directly refutes this concept of hierarchy in Christian community in Galatians 3:28: “there is neither Jew nor Gentile, neither slave nor free, nor is there male and female, for you are all one in Christ Jesus.”

We can also observe this equality lived out in the structure of the early church leadership in Ephesus. Ephesus was a key city in the formation of the global church. Scripture gives us a great deal of information on the Ephesian church. It is highlighted in Acts 19 and 20, and three of the New Testament Epistles are written to encourage its growth (Ephesians, 1 Timothy, and 2 Timothy).

Using these biblical texts and the insights of ancient church historians, we can learn about the early history of the Christian community in that city. A close study of early church history reveals both the challenges faced by the Ephesian church at the time and a living example of church leadership devoid of manmade hierarchies.

The leaders that Paul initially appointed in the house church network were some of his most-often mentioned co-workers, Priscilla and Aquila. Acts 18 identifies them as Jewish exiles from Italy after the edict from Emperor Claudius forced them to leave their home. Priscilla and Aquila relocated to Corinth, where they met the apostle Paul on his first journey there. Paul, joined by Timothy and Silas, lived and worked with them for a year and a half—while he preached to both the Jews and Gentiles in that city.

A close study of early church history reveals both the challenges faced by the Ephesian church at the time and a living example of church leadership devoid of manmade hierarchies.

Paul left Corinth for Ephesus three years later. Almost the entire group would join him on his next voyage to Antioch, but Aquila and Priscilla would remain in Ephesus. During this time, they became leaders of a house church (1 Corinthians 16:19, Acts 20:17, Acts 20:31). It was in Ephesus that they took Apollos, a Jewish teacher and disciple of John the Baptist, into their home and taught him “the way of God more adequately” (Acts 18:26).

Eventually, Priscilla and Aquila made their way back to Italy where they again became church leaders (Romans 16:3). However, it appears that they may have traveled back and forth to Ephesus at least one other time, because Paul later sends his greetings to the couple in Ephesus through Timothy in 2 Timothy 4:19. We don’t have any other conclusive information about their lives and ministry after this point other than that they had the ongoing gratitude and respect of Paul and other “churches of the Gentiles.” They were honored as leaders who risked themselves on his behalf (Romans 16:3), and they may have been included in the group of “elders” who received Paul’s final commission before his execution (Acts 20:17).[1]

There are those who would like to place Priscilla in her husband’s shadow as though she was not a leader in her own right, but merely served under her husband’s authority. However, there are a number of reasons why this is inaccurate.

First, the placement of Priscilla’s name in front of Aquila’s in four of the six times they are mentioned (every time their ministry is specifically highlighted) in the New Testament is very important. It is widely hypothesized that this writing convention was used by Paul because Priscilla had the more prominent ministry of the two.[2]

Second, Priscilla’s involvement in the teaching of Apollos is extremely significant. The word used in Scripture is ektithēmi which has a plural tense in Greek, indicating clearly that it was both Aquila and Priscilla who taught him. The word, translated best as “explain” in English, was used exclusively by Luke in the Bible. Aside from Priscilla and Aquila’s interaction with Apollos, Luke used this verb two other times in Acts. In Acts 11:4, Peter “explained” that God had chosen to include the Gentiles in salvation. The second instance of ektithēmi is found when Paul preached to the Jews in Rome “testifying to the kingdom of God and trying to convince them about Jesus” (Acts 28:23). The teaching that Priscilla did should be seen as authoritative, and the use of this word implies that she was not merely in the background assisting her husband with his ministry.[3]

A Jewish man, a woman, a Gentile, and a former slave paint a picture of what leadership and community in the body of Christ are supposed to look like.

The next church leader on the Ephesus timeline is Timothy. Timothy was the recipient of two of Paul’s letters. He is also the same Timothy mentioned in multiple books of the New Testament (Acts, 1 & 2 Timothy, 2 Corinthians, Philippians, Colossians, 1 & 2 Thessalonians, Philemon, and Hebrews). The son of a Greek father, Timothy was a young man when he first became Paul’s travel companion and beloved protégé (Acts 16:1-3, Acts 20:4-5, Philippians 2:19-23).

Around the year 64 AD, Paul left Timothy in Ephesus to continue the work of confronting the false prophecies so prevalent in that city (because of the cult of the goddess Artemis or Diana).[4] Timothy continued to travel extensively on Paul’s behalf and endured persecutions, including a time in prison (2 Timothy 4:13, Hebrews 13:23). Scripture never tells us what the rest of Timothy’s story was, but church history suggests that he was martyred thirty years later in Ephesus for opposing a local ceremony honoring Artemis.[5]

Timothy was succeeded by another unlikely leader, a man called Onesimus. According to many ancient church historians, this Onesimus is the same slave of whom the book Philemon is written.[6] He was presumably freed because of Paul’s plea to his master (Philemon 1:14-16) and later became a traveling co-worker of Paul and Timothy (Colossians 4:7-9) before eventually becoming bishop of Ephesus. He too was eventually martyred.

This collection of leaders—Aquila, Priscilla, Timothy, and Onesimus, was tasked with building the church that was birthed from Paul’s evangelistic efforts in the city of Ephesus.

A Jewish man, a woman, a Gentile, and a former slave paint a picture of what leadership and community in the body of Christ are supposed to look like. We cannot know if Paul deliberately organized this leadership team to illustrate his earlier stated convictions against hierarchies in the church, and we also do not know how these contemporaries shared leadership responsibilities in that church network. However, we do know that they were all commended in Scripture as co-laborers of Paul and are all remembered by ancient church historians as men and women with influence, leadership, and a permanent legacy in Ephesus and in the global church.

PrevPreviousLoving Your Body Is An Act of Faith
NextDoes God Make the Man? Media, Religion, and the Crisis of MasculinityNext