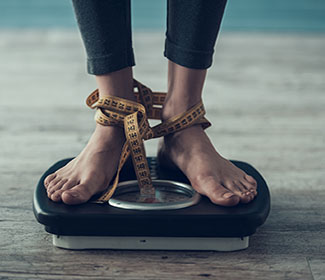 Does Purity Culture Cause Body Hatred and Eating Disorders?

The evangelical purity movement of the 90s and early 2000s is a hot topic among Christians today. More and more women (and men) raised in purity culture are sharing their stories of trauma, dysfunction, and abuse.

Born in 1992, I grew up during the shimmery golden age of the evangelical purity movement. Purity culture is a strange beast. Initially intent on constructing a helpful sexual ethic for Christians, it instead produced oddities like purity balls, where girls accepted “True Love Waits” rings and promised their fathers they’d remain virgins until marriage.

Purity culture also set impossible standards for evangelical girls, planting the seed of self-hate when we didn’t measure up. Many of us came to regard our bodies with suspicion and even to outright reject them as dangerous and inherently sinful. Worse, purity teachings made some of us feel like we could control and contain our “dangerous bodies” through eating disorders and other self-harm behaviors.

Purity culture essentially taught that human sexuality can be erased, or at least stifled, prior to marriage. Instead of learning to understand and process sexual feelings, young people learned that human sexuality is sinful in and of itself. We were also discouraged from seeking to understand and celebrate the bodies God carefully sculpted for us. We were taught to be ashamed of both their function and form.

During some of the most formative years of our lives, young Christians—and especially young girls—were submerged in shame, fear, denial, and control. Education concerning sexuality and bodies was focused almost exclusively on preserving (mostly girls’) virginity.

In some purity circles, desire/bodily feelings of any kind were treated like a moral shortcoming, and girls’ periods/reproductive systems were rarely discussed. As a young evangelical, I didn’t know anything about my body. The first time I got my period, I honestly thought I was dying. This was the case for many young evangelical girls who felt scared, lost, ignorant, and out of control when their bodies changed without their permission.

Many fathers were warned to zealously guard their daughters’ virginity. Socialized to regard themselves as gatekeepers and their daughters as precious princesses, they waited to see which suitor could win their approval. With the best of intentions, they watched and tried to protect. Many didn’t realize that purity culture would hurt their daughters.

Patriarchy thrived in the purity movement. Purity culture disempowered women and girls and undermined their agency. Girls became bystanders to their own lives. Daughters learned to see their bodies as the property of men—first belonging to their fathers, then their boyfriends, and then their husbands. Girls’ bodies didn’t belong to girls themselves.

Many young girls didn’t learn to set boundaries related to their bodies, or to practice consent. Thus, women who were raised in purity culture may be uniquely vulnerable to rape, assault, and even more subtle trespasses like inappropriate comments and behavior.

Purity Culture and Distrust of the Body

Girls also learned to distrust their bodies, which after puberty (and sometimes even before) became obstacles to men’s devotion to God. As girls’ bodies changed, they were asked to cover up. There were T-shirts-over-swimsuits rules at Christian summer camps, excessively gendered dress codes at Christian schools and universities, and countless books and sermons on how modesty prevented men from lusting.

Through these messages, girls realized that their bodies were things to be ashamed of. One step further, their bodies were to be rejected. Some of us began to believe that sin lived in our very skin, in the curve of our hips, in our newly-developed breasts.

During my time in evangelical grade school, we were threatened with the “modesty sweatshirt.” It was an overlarge, moth-mauled sweater which girls could be asked to wear over any outfit deemed “immodest” by staff. We all knew what the sweatshirt meant: the wearer didn’t understand how dangerous her body was to boys. She was selfish and provocative and deserving of discipline and public censure. She was a bad girl. No one wanted to be made to wear that “Scarlet A.”

One survivor of purity culture put it this way on her blog:

[Purity culture] taught me that the older I got, the more susceptible I was to boys and risky sexual behavior. My body was a dangerous thing. I now had boobs and my pants were much tighter around the hips and thighs. Where was this coming from? I had no control over it anymore. It was becoming voluptuous and needy. It demanded attention… This body was sexual, curious, excited. This body was dangerous. This body was sinful.

Around the same time I was discovering my body, I began hearing darker messages.

“As Christian girls, we have to dress modestly,” I was told at church. Wearing revealing clothing could cause the boys to lust, which was a sin.

I feared my shape would attract attention from the boys, or worse, appear that I was trying to attract their attention—both of which my church taught me, were evil.

Purity culture neglects to teach girls how to make decisions about who can touch their bodies and how. It also leads them to believe that female bodies represent danger and chaos. This isn’t a new idea. For centuries, women have been associated with chaos in literature and art. But for some girls, this age-old myth had a sinister destination: they needed to punish their “dangerous bodies.”

Because eating disorders often flow out of a desire for control and because patriarchy grants women so little control over their lives and bodies, it’s no surprise that many see a link between the purity movement and eating disorders.

The survivor who worried that her body might attract boys’ attention also shared:

The month of October, 2006, I decided to become anorexic. I was 15. I was sitting on my computer at home looking for “ana” inspiration, fascinated by sickly thin pictures of women on the Internet. The concept was simple enough. Eat less, exercise more, get skinnier. Deny myself, just like Jesus would. It was a completely holy act, just like fasting. I was not comfortable with the fact that my clothes were tight, or that my cleavage stared back up at me when I looked down. These parts of my body were disgusting, quite frankly. They were symbols of sex, which my mind was programmed to believe were very bad things.

The easiest solution was to get rid of them, and so that is what I did.

For the next year and a half of my life I starved myself like a professional. I lost twenty-eight pounds in about four months… Life consisted of 1,000 calories a day. It was perfectly in control.

When girls are taught that their bodies are moral threats, they will likely seek to contain them in whatever way they can. Further, because purity culture—built on patriarchy—grants women so little agency or autonomy, they may look for other ways to exert control such as policing food intake/weight gain.

While the link between purity culture and eating disorders is mostly anecdotal at this point, I believe that future research will support what many survivors of purity culture are saying: the purity movement caused many girls to hate the bodies they live in. And if girls and women are taught to hate their bodies, then why would they treat them well?

God made our bodies with creativity, care, and precision. Then, God looked and called us “very good” (Gen. 1:31). God was right—our bodies are “very good.” I pray that what we teach about bodies in the church will reflect that truth.

PrevPreviousDebunking Eros: Why Romantic Love Isn’t the Only Love Worth Having
NextForget the Husband Trump Card: Why Couples Should Make Decisions TogetherNext